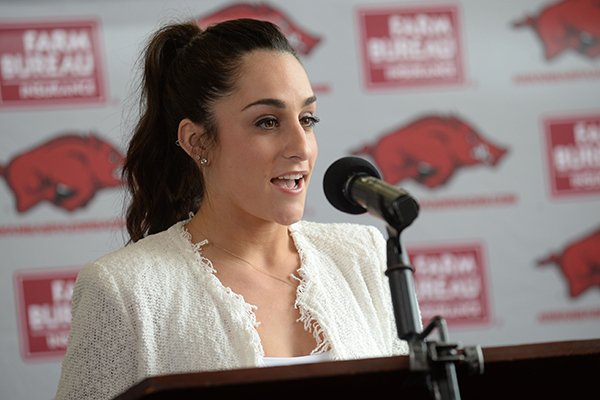 Newly hired Arkansas gymnastics coach Jordyn Wieber speaks Thursday, April 25, 2019, during a ceremony in the Bev Lewis Center for Women's Athletics on the University of Arkansas campus in Fayetteville.

FAYETTEVILLE -- There have been many firsts for Olympic champion gymnast Jordyn Wieber during her first couple of decades of life, but the one she was focused on Wednesday was her first meet as a college head coach.

Wieber will lead the No. 19 University of Arkansas gymnastics team into a daunting road meet at No. 3 Florida on Friday.

When 6 p.m. Central on Friday

The Razorbacks, coming off their first winless SEC run in the 17-year history of the program, will follow one of the nation's youngest college head coaches of any sport into the 6 p.m. Central road meet.

Wieber, 24, is the first Olympic gold medalist gymnast to take the head coaching reins at a college program. After retiring from competitive gymnastics in 2015 at age 19, Wieber had been enrolled at UCLA, serving as a student assistant and rising up to handling the Bruins' explosive No. 1-ranked floor exercise team last season.

[Video not showing up above? Click here to watch » https://www.youtube.com/watch?v=9alyW4SmIEk]

She sagely cited the legendary John Wooden when discussing how she will ask the Razorbacks to approach their first season without Mark Cook at the helm.

"We're going to show up and bring our best selves every single meet," Wieber said. "I always go back to John Wooden's definition of success.

"It doesn't say anything about winning meets. It doesn't say anything about being the best. It says it's the peace of mind knowing you did everything you could to be the best you're capable of becoming. And I literally heard that again today and it just reminded me. I'm excited to go out there and know that we've done everything we can to prepare. I hope the athletes feel the same way."

Wieber's background at UCLA helped her meet Wooden and absorb lessons from Valorie Kondos Field, the seven-time NCAA gymnastics champion as coach of the Bruins, and a legend in the sport, who is married to former Razorbacks defensive back Bobby Field.

[Video not showing up above? Click here to watch » https://www.youtube.com/watch?v=VQQJ9onlXL8]

Wieber said her first big challenge was getting to know the athletes.

"We've had to really work to build some relationships and connect with them and figure out what motivates each of them, and how to help them be the best versions of themselves," she said.

The Razorbacks might not be favored in any SEC meets this year. All the other seven SEC programs who sponsor gymnastics are ranked ahead of the Razorbacks, who have injury issues heading into the season opener.

Wieber is only a couple of years older than the most veteran Razorbacks, but she's managed to connect and inspire.

"I love Jordyn," said junior Sarah Shaffer, who will be limited to just the vault this weekend as she recovers from injury. "She's really helpful, not just in the gym, but outside as well. She's helped me a lot as a person and as a gymnast."

Wieber worked over the summer to come up with a theme to help the Razorbacks focus on improvement and maximizing their performances. She settled on the term 'RISE' as an acronym for Ready, Ignite, Sparkle and Explode.

"I found myself continuing to say, 'This is a team on the rise.' This is a team that has every bit of talent and desire they possibly need. They just have to buy in and have the culture that is the foundation to be able to go out there and be the team they're capable of being."

Wieber said the team has progressed through the first two segments during preseason training, both before and after the holiday semester break.

"Right now we're at the beginning of the S segment that stands for Sizzle," she said. "The whole idea behind sizzle is they've prepared all throughout preseason and now they get to go out and perform and literally sizzle.

"Just come out of the gate looking really strong and for everyone to say, 'Hey, look at Arkansas. They're a strong team.' In all aspects. Not just gymnastics, but the way they show up, the way they're there for their teammates, the way they cheer from the sideline. Every bit of that, I want them to literally sizzle."

CORRECTION: An earlier version of this story listed an incorrect age for Wieber when she retired from competitive gymnastics in 2015. She was 19.