Razorbacks open with No. 3 Florida gymnasts 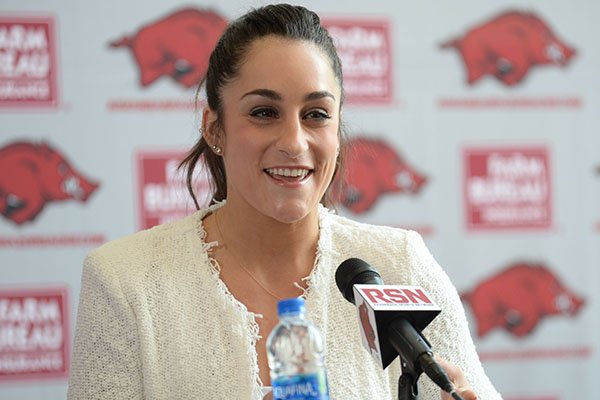 Arkansas gymnastics coach Jordyn Wieber speaks Thursday, April 25, 2019, during a ceremony in the Bev Lewis Center for Women's Athletics on the University of Arkansas campus in Fayetteville.

FAYETTEVILLE -- Jordyn Wieber's first meet as head coach for the University of Arkansas' gymnastics program is a doozy.

The Razorbacks, coming off the first winless conference season in the 17-year history of the program, open the Wieber Era today at No. 3 Florida. The SEC opener for both schools will start at 6 p.m. Central at ExacTech Arena in Gainesville, Fla.

"I thought I would be a little bit more nervous this week, but I actually feel really calm, really excited and I told the girls that today," Wieber said on Wednesday.

"I think that's just a result of how hard they've worked. How much I believe in our preparation and all the work they've put in. I feel like as a coaching staff if we feel we did everything in our power to prepare them mentally and physically then we'll feel calm going into the weekend and that's the feeling I have."

The good news for Arkansas (9-18, 0-7 SEC in 2019) is the Razorbacks will open with the nation's No. 19 ranking in the Women's Collegiate Gymnastics Association poll. The bad news is they have injuries to key contributors and every other SEC program is ranked higher.

The Razorbacks will be without senior bars and beam standout Hailey Garner and sophomore Amanda Elswick, and junior all-arounder Sarah Shaffer is limited to just the vault.

Garner suffered a concussion in the Razorbacks' intrasquad meet and is expected back in a week or two. Elswick, who contributed on the vault, balance beam and floor last season, will miss time recovering from a shin issue. Shaffer competed in the all-around the first three meets last year, then dropped the balance beam for the next nine meets.

Wieber, a 2012 Olympic gold medalist and 2011 World all-around champion, said precautionary measures apply to all three of those gymnasts.

"We're looking good and we're getting healthier," she said. "I'm not worried about those three. I'm actually really excited for our depth to be able to step up and be there for their teammates."

Senior Jessica Yamzon will compete in the all-around, as she's done for every other meet in her career. She'll likely be joined by sophomore Kennedy Hambrick, an All-SEC selection in the all-around last year, and freshman Kiara Gianfagna. That would account for half of the Razorbacks' 24 routines.

Shaffer, who is expected to add to her workload in the coming weeks, said opening at Florida is OK with her.

"It's a great place to start," Shaffer said. "I love competing in Florida. Their fan base is great. Their arena is really nice, and they're a competitive team too.

"I think it's a good place to start to just hit the ground running right from the beginning. It's gonna be good to see how we compare to another SEC team."

The Razorbacks, 3-44 all-time against Florida, are 0-8 in dual meets on the road against the Gators.

The teams closed out the regular season last year with a dual meet at Barnhill Arena, with the Gators winning handily 197.225 to 196.35 to clinch the SEC regular season title.