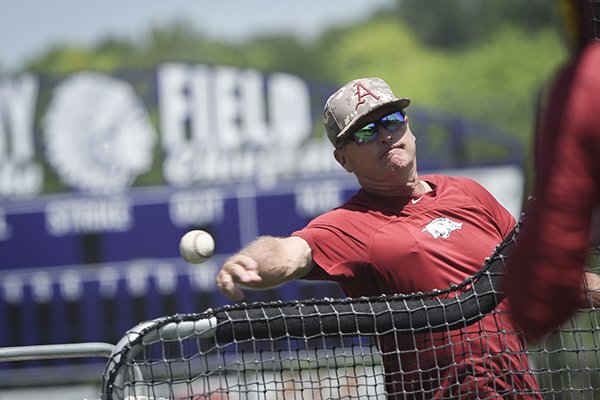 You know the great line from “Field of Dreams”: Build it and they will come.

Arkansas baseball coach Dave Van Horn is more about “growing it” and the stands will fill. Arkansas has basically sold out Baum-Walker Stadium again as the season nears.

The growth of the fan base at Baum-Walker Stadium is incredible. The Razorbacks are set to begin practice on Jan. 24 with a goal of a third straight trip to the College World Series.

Van Horn’s 18th Arkansas team has as strong a chance to end up in Omaha as any of his six UA teams that played in the CWS, or his two Nebraska teams that finished there.

Yes, Van Horn has taken eight teams to the College World Series in 22 years split between Fayetteville and Lincoln. And, he’s going to keep going until he wins the CWS title.

Some wondered a few years ago whether or not Van Horn might leave Arkansas to see if a change of scenery might boost him to a national title. No one suggests that now.

In fact, his wife Karen, an elite architect, is in the process of designing a dream home near what I’d call a dream home - their current residence - in the Bridgewater subdivision. The new one will be a little closer to town, but still in the county.

“It’s on 22 acres and I drive by it every day,” Van Horn said about the new piece of land that is already receiving what I call the DVH touch as far as development and growth.

“We’ve strategically planned every tree. And, they are well cared for by me. I protect them with PVC pipe I split and wrap around the trunk to protect them (from deer). It’s worked pretty well.”

It’s about in the same stages of Arkansas’ bid for a national title. Most everything is ready.

Several years ago Van Horn began to dabble in transplanting trees. His assistants now joke that “every day is Arbor Day” with Van Horn.

That’s not true, but pitching coach Matt Hobbs, when asked to describe how it is to work with Van Horn, included knowledge of tree planting with his answer.

“He’s all about hard work,” Hobbs said. “You must work if you are going to play or coach with Dave. You probably are not going to match his level of work because he’s a consistent machine.

“That’s whether you are talking about recruiting, what we do in practice or planting a tree.”

That comment preceded an interview with Van Horn. A light went off to ask about tree planting. I wasn’t prepared for what followed.

Van Horn smiled when asked about his developing forest, and that’s about the only way to describe it.

“I’ve planted over 200,” he said. “I may be about planted out. But these are not just randomly thrown out and planted. We have carefully plotted where each oak, maple, ash or magnolia goes.

“Planting a tree is quite a job. Some of them are one-man jobs, but some aren’t. It takes several people to help me on the bigger ones.

“I’ve got a front-end loader (to move the root wads), but some trees are as tall as 30 feet and require something bigger to plant. Luckily, I’ve gotten close to some nurseries and I can get them to help sometimes.

“I’ve planted a lot of oaks, maples, ash and maybe 100 magnolias. There are probably every other species you can name.”

Like his players, they come from across the nation.

“I hear of a nursery truck coming from Mississippi or Tennessee and maybe there is some extra room and they will help me out,” he said. “A lot are 20 feet, but some are trees as tall as 30 feet. I just put in five maples – pretty skinny – that are 30 foot.

“For these, I can’t dig the hole. You need a backhoe. I’ve dug many a hole. I’ve learned to do a lot by myself.”

The key is not so much to plant them, but to keep them alive.

“The first few weeks, they need lots of water,” he said. “I have a lot of different ways to water them. It’s a hobby, just the watering.”

Obviously, there is method to the madness. There is a master plan that matches the design of the house, to come later.

“I think I’ve got the (tree planting) in pretty good shape now,” he said. “I’m probably not going to plant as many going forward. It’s about like I want it. Now, it’s just tending to the trees and that’s a great stress release.”

And, the release is from the building of the Arkansas baseball program. It’s also in pretty good shape. It may be a good stress release from the work in the Van Horn forest.

“I knew that by 2018 we had the baseball program in pretty good shape,” Van Horn said. “The good part is our staff, I really love our people. We have good coaches. And, then you look at our players. They come from great families. Our kids have been raised right. They teach each other to work.”

That’s especially important when there has been a bad bounce or a hot team has given the Hogs a few losses. You don’t win them all in the SEC. But the Hogs have shared the championship the last two years in baseball’s toughest division, the SEC West.

“When things didn’t go right the last couple of years, we had the right kind of attitudes to handle a little adversity,” Van Horn said. “That’s gotten us through tough times. Our guys are close and they didn’t want to let each other down.”

And, it may get better. Van Horn and assistants Nate Thompson and Hobbs have put together spectacular recruiting classes the last two years. Some rate the 2020 class as top five. The next two might be as good or better.

“The 2020 class is exciting,” Van Horn said. “It’s second, third, fourth depending who you ask. Now that’s before the draft, but we like where we are. The 2021 class is not too far behind.

“It’s exciting times. We have the new (clubhouse) going up. Everything looks pretty good.

“It’s tough to get a program to this point. Things look good for this team. We have good arms and we have guys in our lineup that can beat a Friday night guy in the SEC. We have a good offense.”

Now, it’s just about providing the right amount of water, then prune the bad growth. It’s the sort of stuff Van Horn does really well.

Check out his forest. It’s like his baseball program, strong and healthy.