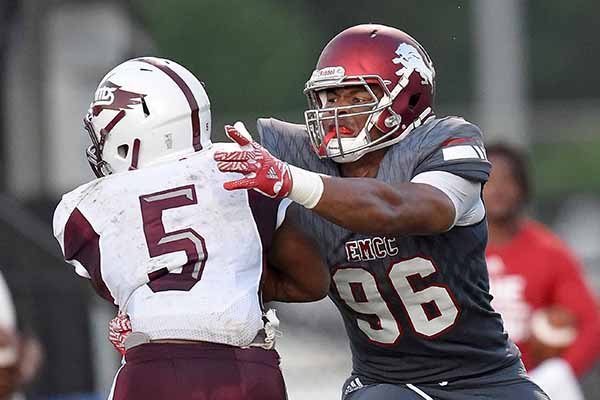 FAYETTEVILLE — Six of the newest members of the Arkansas football team will be on campus by Sunday.

Arkansas State graduate transfer cornerback Jerry Jacobs (5-11, 204) is set to be on campus Sunday when a full team meeting is set with head coach Sam Pittman and his staff.

Turner spoke recently about enrolling early and being able to go through offseason conditioning and spring practice.

“I feel like it will be good for me to get up there early so I can learn and get an early jump,” Turner said. “I will be ahead of the game.”

Coates and Turner inked their national letters of intent on the second day of the Dec. 18-20 early signing period.

Coates, who began his career as a tight end at Ellsworth (Kan.) Community College, had 30 tackles, 6 sacks, forced 2 fumbles that he returned for touchdowns, and also blocked 2 punts.

Pittman was excited to land Coates, who chose Arkansas over Oregon, Nebraska, Colorado and others. Coates was offered by the Razorbacks just a few days before he signed.

“Julius was a late addition for us during the early period,” Pittman said. “He's a big guy that moves really well, he started his (junior) college career as a tight end. We're planning on him coming in here and making our defensive line better.”

Turner, a former LSU pledge who committed to Arkansas on Aug. 30, de-committed when former head coach Chad Morris was fired on Nov. 10, and came back into the fold after a second official visit to Arkansas in December, could end up on either side of the ball.

A 4-star prospect, Turner was ranked the No. 114 overall player in the 2020 class by ESPN and chose Arkansas over Auburn, LSU, Ole Miss, Mississippi State, Tennessee, Clemson, Oklahoma and others.

Turner caught 17 passes for 305 yards and 5 touchdowns this season, and also had 12.5 tackles, 5 interceptions and 5 pass breakups.

"We were really excited when Darin decided to rejoin the class,” Pittman said. “He’s such a good athlete. We're not sure what position he's going to end up at yet but we're elated to add an athlete of his caliber. He's going to help us."