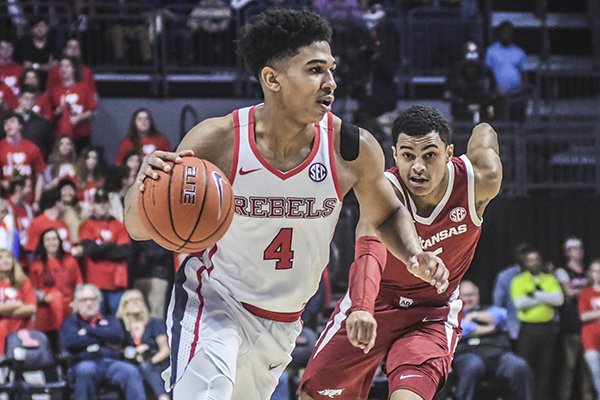 Three days after enduring an assault on the glass by big and physical LSU, the University of Arkansas will face a much-different approach today at Ole Miss.

The Rebels have lost two games in a row, falling 74-54 at Wichita State last Saturday while most SEC teams were playing conference openers, then losing 57-47 at Texas A&M on Tuesday.

Guards Breein Tyree and Devontae Shuler combined to score 38 of the Rebels' 47 points.

"I mean, he can score, he can dribble, he can pass," Musselman said. "He's a great player."

Shuler added 12 points on 5-of-18 shooting for his sixth consecutive double-figure scoring game.

The problem for Ole Miss Coach Kermit Davis in that game was his other three starters -- Blake Hinson, Khadim Sy and KJ Buffen combined for five points on 2-of-17 shooting, including 0 of 7 from three-point range.

Musselman complimented Davis for running a scheme that gives Tyree and Shuler freedom.

"They have a great coach who puts them in great spots to score the ball," he said. "Their team understands that [Tyree] is the man. Both guards. It's as good of a back court as there is in the conference, for sure. They are both really confident, and they are experienced."

Davis fussed at his Friday news conference about the Rebels not being tough enough.

"We're a team that doesn't play as hard as we would like," Davis said. "I've said it before. It hurts me because all the teams I've had the last 10-12 years had toughness, physicalness and played with great body language.

"I love teams that play with an edge, play with passion. When it goes a little bad for us right now our leadership is not great."

Tyree said the Rebels have many areas to shore up.

"It's something we've got to figure out as a team," he said. "I don't think it's one specific thing. I think it's a whole lot of things."

Tyree pointed out playing with more energy, rebounding -- which A&M won 41-36 on Tuesday -- and securing 50-50 balls as key areas for Ole Miss.

While Davis has to figure ways to get more scoring threats in action, Musselman and the Hogs are eager to shore up their board work and to find depth in the front court.

Musselman was well-pleased with his club's half-court defense at LSU, but not their second-chance defense.

"If you look at our half-court defense before they got the rebound, if you could just cut the film, I don't know if there's many teams in the country that could guard the way that we guarded up until the rebound," he said. "Again, unfortunately, you can't freeze frame and stop and say, 'You took a shot, now we get to take the ball and go the other way.' There's a rebound that's part of the game of basketball."

Davis noted the rebounding discrepancy for the Hogs.

"LSU's probably one of the best rebounding teams in college basketball, and they just kind of imposed their will on them," Davis said. "LSU can do that on a lot of people. They just went and got it. That was the difference in the game.

"Arkansas didn't get maybe as many points off turnovers as they would have liked. It was 15-10, only plus-five. LSU went back and got 23 offensive rebounds that led to 26 points."

A key factor for today's game could be stamina. The Rebels played Tuesday, while Arkansas was on the road Wednesday, got home late and had to travel on Friday to Oxford.

"I mean, we didn't get back until 1:30 [a.m.]," Musselman said Thursday. "We're leaving tomorrow. ... It's a short turnaround. Ole Miss has an extra day of prep and an extra day with their legs to rest. Which, it's going to flip-flop for us one time, too, so I'm not using that as any factor."