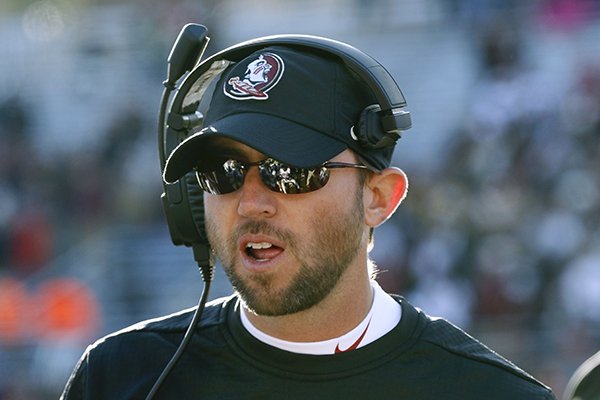 Florida State offensive coordinator Kendal Briles works on the sideline in the second half of an NCAA college football game against Boston College, Saturday, Nov. 9, 2019, in Boston. (AP Photo/Bill Sikes)

FAYETTEVILLE -- New University of Arkansas football coordinators Barry Odom and Kendal Briles had something in common when it came to signing on with the Razorbacks.

They were both intrigued by the idea of working for Sam Pittman.

Odom has been buddies with Pittman for 20 years. Briles did not have a prior relationship with Pittman, the first-year Arkansas head coach.

"I did my research on Coach Pittman and just kept hearing great things about him as a person and as a man," Briles said Friday. "And in this profession -- I've kind of bounced around a little bit -- I think that being around really good people is important to me. And I called Sam, and we had a conversation, and I just thought it would be the right fit."

Odom, the head coach at Missouri the last four seasons, said his first real sit-down with Pittman came in 2000, the year Pittman coached the offensive line at Missouri. That was right after Odom finished his career as a middle linebacker for the Tigers (1996-99).

"I knew him a little bit before," Odom said, referencing his time as a prep recruit out of Ada, Okla. "When he walks into a room he's kind of an infectious personality. We hit it off. He did a lot of talking, and I did a lot of listening, I felt like.

"He's awesome. ... If I was picking and choosing who I would work for, I'm happy I'm here working for him."

Odom jumped on board with Pittman five days after Pittman was hired by UA Athletics Director Hunter Yurachek and 13 days after he was fired as head coach at Missouri with a 25-25 record, including a 4-0 mark against Arkansas.

"It starts with Sam Pittman," Odom said when asked what attracted him to Arkansas. "My belief in him, and also I look at the leadership that has aligned with the university and our athletic department. I know people that have worked with Hunter. And to me that's a really big deal if you get aligned with people. If the vision and the belief and the support is where that needs to be, that's hard to beat in this business."

Pittman told the Arkansas Democrat-Gazette in late December that bouncing ideas off of Odom has been helpful for him already.

"He's surrounded himself with people he trusts," Odom said. "That's hard in this business. But I'm not afraid to express my opinion. I've been wrong a lot of times, and that's OK.

"But you always learn from your experiences ... good and bad. That's part of life. You learn from it and you move on. I've given him some ideas that I thought worked well for us. Some things if I had to do it again, how I would change it.

"I'm vulnerable enough and have been open enough with the experiences that I've gone through in my career. I've always learned from them, good and bad, and hope to put those in action to have an opportunity to make our program better."

The Razorbacks will hold their first team meeting with a full coaching staff on Sunday. The Hogs have not gone to a bowl since the 2016 season, the year after Pittman departed Arkansas as offensive line coach, and will enter next season on a 19-game SEC losing streak.

"I want to try to help build this," Briles said. "It kind of reminded me of the situation we were in at Baylor. Their drought is not as long. I think Baylor was in a 15-year bowl drought. And we went in there and changed that, and it was awesome to see that happen. Just to be able to do something like that."

Briles said he recognized there is rebuilding to be done at Arkansas, but added, "I'm very confident we're going to win. That's my mindset. I want to go win now. I'm not trying to say, 'Hey, we'll get better and win three games.' We want to go bowling next year. So that's the mindset.

"That's going to be the mindset of everyone in this building. Realistically it's going to be difficult, but I think we've got a great staff and a tremendous leader in Coach Pittman. I think we have good players here. We've just got to get everybody on the same page and get some better players in here as well to help them."

Odom said giving the players a platform to be successful will be key as the Razorbacks point toward spring drills.

"It's so important right now when we get started on Sunday night in that first team meeting [to discuss] the standards and expectations of what we're going to do and the reasons why," he said.

"I don't really care about what's happened here, good or bad, before Sunday night when we get started. It's up to us to write our story together. And I want to give them my heart and soul, I'm going to pour into these guys.

"There's plenty of work to get done. There will be guys that dive in and they'll embrace it. We've got just enough time between now and when we kick the ball off in September, but we've got no time to waste."