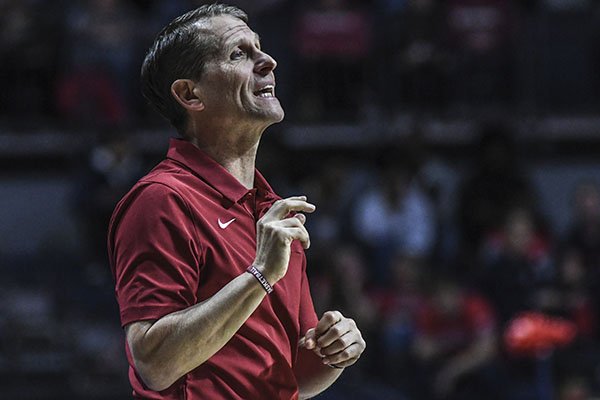 There is zero quit in this Eric Musselman-coached Arkansas team.

The Razorbacks (13-2, 2-1 SEC) were on the verge of dropping their second consecutive game in SEC play when Ole Miss took an 11-point lead with 15 minutes to play on Saturday. But, as we've learned over the last couple of weeks, a double-digit lead at home against Arkansas isn't safe.

Sophomore guard Isaiah Joe made a statement against the Rebels, tying a career high with 34 points and leading Arkansas to a big comeback win behind 26 second-half points. He was phenomenal when the Razorbacks needed him most.

Joe knocked down 7 of 13 3-point attempts - 5 of 7 after halftime - and also kept Ole Miss off balance by scoring five times off the bounce. Among his seven triples was a four-point play from the left corner and another that sparked a critical five-point possession and tied the game with 5:33 remaining.

There are questions regarding Joe's legitimacy as a player at the next level. I think Joe, on both ends of the floor, showed why he belongs on Saturday. Not only can he catch fire and put an offense on his back for an important stretch, he came up with two of the biggest defensive plays of the game as well, a pair of steals that immediately led to Arkansas points.

"He's such a good defender," Musselman said. "I think he's a great defender. I don't think he's a good defender. He's long, he's got great anticipation and he understands his assignment every night. It's not often that when you have a scorer that you can put him on an offensive weapon on the other team, and we do that for him.

"There is absolutely no doubt he's one of the best defenders in this league from a guard standpoint. I don't think he gets enough credit defensively."

Mason Jones did not have exactly the scoring night he envisioned, but he was invaluable in the win. He scored 13 points, his sixth straight game with 10-plus points, and finished with a career-high nine assists. His previous best was seven in his third game as a Razorback against Indiana in Nov. 2018.

Five of his assists came in the second half as the Razorbacks surged back from a double-digit deficit. Jones is now averaging 5.3 dimes per game in SEC play.

"We put the ball in Mason's hands so much, and usually we put it in his hands to be a scorer," Musselman said. "Tonight, he respected the defense, and I thought (he made) incredible passing plays and incredible unselfish plays. Isaiah gets some good looks, too, because Mason causes a little bit of alertness with the defense.

"Those two guys just kind of feed off of each other. But I was proud of Mason for not trying to force things. He recognized tonight that Isaiah was rolling."

While Joe, shooting 41.2 percent from 3 in league games, was unquestionably the story of the game for Arkansas, he got complementary performances from key players as well. Jones added 13, Jimmy Whitt pitched in 11 and knocked down 7 of 8 free throws, and Adrio Bailey and Desi Sills combined for 17 points and eight rebounds.

Bailey and Sills were plus-10 and plus-7, respectively, in the win.

Whitt, a shaky free throw shooter entering conference play, has suddenly found his touch at the line, knocking down 11 of 12 attempts over the last two games. With Arkansas up two with less than 10 seconds to play, the ball found Whitt's hands, and he was fouled quickly by the Rebels.

He confidently knocked both down and set the final score. He also came up with two steals in his 39 minutes.

Saturday was a bit of a struggle for the Razorbacks defensively. They seemingly could not string consecutive stops together, and Ole Miss kept Arkansas at arm's length for much of the second half. Musselman's bunch, though, posted a defensive efficiency rating of 98.5, according to KenPom, and forced Ole Miss into a turnover on 21.9 percent of its possessions.

Musselman added that one stretch on the defensive end changed the complexion of the game for Arkansas, when Sills left his man and soft trapped Devontae Shuler or Breein Tyree, who combined for 37 points in the loss.

"We call it a hit/shadow when we leave a particular player and trap somebody," he said. "We did it for four years at Nevada. We haven't really had time to do it (at Arkansas.) We did it for four possessions and they went 0 for 4, and I thought that was a crucial point in the game."

Grad transfer forward Jeantal Cylla played his first significant minutes for the Razorbacks on Saturday. He grabbed five rebounds, one offensive, in 11 first-half minutes and made 1 of 4 free throws. Reggie Chaney committed one foul and turned the ball over once in four minutes.

Musselman repeated himself several times in his postgame remarks. He made it clear that everyone is ready to return home, noting, too, that four players had to change hotel rooms during the trip to Oxford because of leaks.

Arkansas, which is now 3-2 on the road, returns to Fayetteville for two games this week against Vanderbilt on Wednesday and Kentucky on Saturday. The game against the Wildcats has long been a sellout and is a huge weekend in recruiting.

Once again, the fight and never-quit attitude this team possesses is remarkable. The Razorbacks battled when hit with adversity and punched back on the road. That is admirable. Now, Arkansas gets to bring that back to Bud Walton Arena for a pair of key games.

This upcoming week should be interesting.