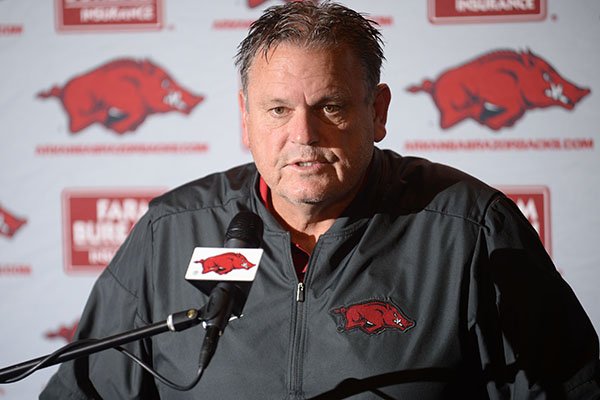 However, there seems one see-through garment that conceivably could expose like an emperor's new clothes.

For the first time since -- maybe ever -- Arkansas' full-time football coaching staff doesn't have a native Arkansan or any former Razorback on it.

So as athletic director in 1977 replacing himself as head coach, Broyles from his last staff insisted that obvious Yankee Lou Holtz retain former Razorbacks and native Arkansans Harold Horton and Jesse Branch and Arkansan Ken Turner. All three served so well to be inducted into the Razorbacks Hall of Honor.

It wasn't until Bobby Petrino, with just Tim Horton on his last three staffs, and Barry Lunney Jr. on the Bret Bielema and Chad Morris staffs, that Arkansas ties cut to one.

Now there seem none.

Pittman rebuts 10-fold plus one. The plus one is himself. As a lifelong Razorbacks fan from nearby Grove, Okla., and Bielema's 2013-2015 Razorbacks' offensive line coach, Pittman knows both historically and firsthand the Arkansans impact on Arkansas football.

He knows the consequences of Bielema ignoring the Arkansas-born likes of Taylor Powell, Barrett Banister and Akial Byers annually whipping the Hogs for Odom's past Missouri Tigers.

Pittman plans combining more Arkansas reminders than all his predecessors.

All 10 assistants will "have a piece of Arkansas," Pittman asserts regardless other areas they recruit.

"So about having an Arkansas man, I believe that by the end of spring we are going to have 10," Pittman said. "It doesn't take long when you have 10 guys that are going to go out in the State of Arkansas if they are good people and good men to build great relationships. Matter of fact they (Arkansas high school coaches) are helping us right now calling daily. If they are not excited about this staff at the University of Arkansas they wouldn't be doing that."

Director of high school relations Bobby Allen, serving Arkansas staffs since he was a defensive co-coordinator for Houston Nutt in 1998, was Pittman's first rehire. Pittman said they chanced walking in together on Pittman's first official Arkansas morning and he immediately asked Allen to stay.

"I have high respect for him," Pittman said.

"I told the players they didn't choose me," Pittman said at his first December press conference. "But I sure as hell chose them."