Arkansas commit was special for Hurricane 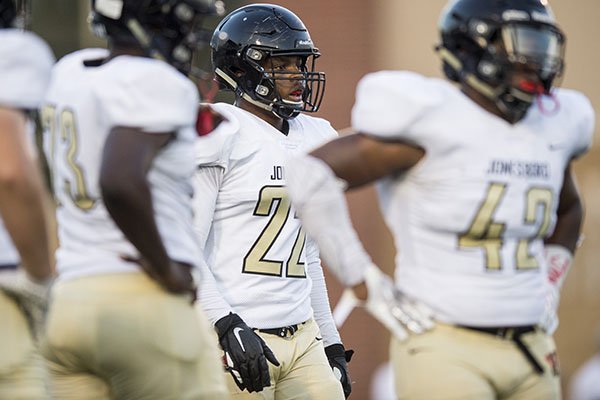 Jonesboro defensive lineman Jashaud Stewart (22) is shown during a game against Conway on Friday, Sept. 13, 2019, at John McConnell Stadium in Conway.

But for Coleman, it’s not only the way Stewart played on the field, it’s how he conducted himself off the field.

“The fact of what kind of young man he is is what makes it fun to coach a guy like Jashaud,” Coleman said. “He does things full speed, first class every day. It doesn’t matter if it’s in the weight room, the practice field, in the meeting room, in the film and obviously, the game field. Everything is the same.

Stewart At a Glance

HIGHLIGHTS Recorded 114 tackles, including 23 for a loss, 17 sacks, 3 forced fumbles and 2 fumble recoveries as a senior. … Helped lead Jonesboro to an 8-4 record and an appearance in the Class 6A quarterfinals. … Signed with the University of Arkansas in December.

“When you have a kid like that, with the athletic ability that he has, that’s when you’ve got somebody special.”

Stewart, a University of Arkansas signee, had a state-high 17 sacks in the 2019 season and is the Arkansas Democrat-Gazette’s All-Arkansas Preps Defensive Player of the Year.

In addition to his 17 sacks, Stewart finished with 114 tackles, including 23 for loss, 3 forced fumbles and 2 fumble recoveries in 2019.

“Every week was a highlight film,” Coleman said.

Jonesboro went 8-4 and advanced to the Class 6A quarterfinals, losing at Benton. Losing in the Class 6A playoffs was not what Stewart intended for as a senior.

“My main goal was to win a state championship. That was it,” Stewart said. “The accolades came with me just playing hard throughout the season.”

With Stewart on the defensive line, Jonesboro allowed 16 points per game this past season. Stewart’s presence was beneficial for Jonesboro, Coleman said.

“It was a trickle-up effect, because the defensive line was our foundation. It all starts with Jashaud. He was the heart behind our defense and the motor because of how hard he played.”

Stewart credited his teammates for his success in 2019.

“I played around a great group of guys,” Stewart said. “We played together. We kept our heads up when we lost. We just played together as a team. I enjoyed it.”

Up next for Stewart is college football.

Stewart chose Arkansas over scholarship offers from Houston, Kansas, Memphis and SMU, among others. He won’t enroll until the summer, but said he is looking forward to being with the Razorbacks, who will be led by first-year Coach Sam Pittman in 2020,

Coleman said he believes Stewart’s career with the Hurricane will help future players who want to achieve similar goals.

“People see the awards he’s receiving now, like the defensive player of the year,” Coleman said. “He’s giving them a model to follow. It starts with his work ethic.

“When your best player is your hardest working kid, it just shows everybody else the way they need to be. That will be seen in our program for years to come.”