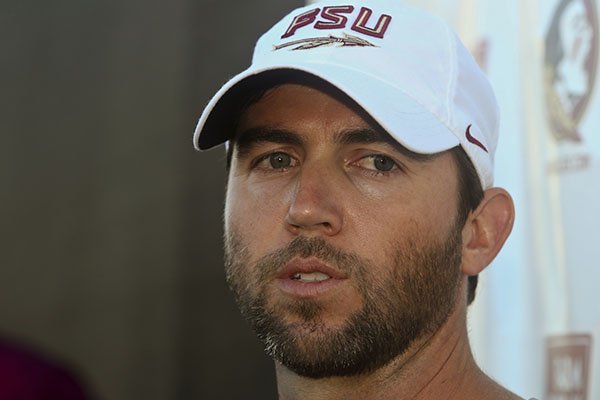 FAYETTEVILLE -- Kendal Briles does not sit in the press box, studiously reviewing his play sheet, somewhat detached from the playing surface during game days.

The new University of Arkansas offensive coordinator for Coach Sam Pittman likes to call games from the sideline, in the middle of the action.

Also, if the Razorbacks use the common assortment of backup quarterbacks, assistants and placards to signal in plays this season, they're likely decoys.

Signaling in plays is Briles' baby.

"The reason I do it is because I like being on the field, first of all," Briles told the Arkansas Democrat-Gazette on Friday. "And then it's quicker than being in the box. If you're in the box, you've got to tell somebody what the play is. They've got to process it, and they've got to signal it in. So that takes time.

"I feel like as soon as I know exactly what happened on the previous play, I'm already signaling in."

The guys' eyes are on me. It gives you a chance to play faster. And I like being on the field and being able to feel what's going on."

Briles said he believes in players, relationships and communication above schemes.

"A lot of people try to make the game so much X's and O's, but it's about people," he said. "Dealing with people and seeing people, so you've got to be able to feel the emotions."

Briles, 37, has held the title of offensive coordinator each of the past five years, two at Baylor (2015-16), followed by single-year stints at Florida Atlantic, his alma mater Houston and Florida State. Before that, he was a Baylor offensive assistant for seven years, the last three as wide receivers coach and passing game coordinator for a prolific Bears' offense.

From 2015 through 2018, the four offenses he coordinated scored 34 or more points and averaged 498 or more yards per game to rank in the top 10 nationally.

Briles wants the Razorbacks' offense to be balanced.

"We're multiple in what we do," he said. "We want to be very balanced in run-pass. We're going to spread the field. We'd like to be able to throw the ball vertically down the field. Aggressive, attacking, tempo. And you're going to see the splits and everybody's going to talk about the spread, but we want to run the football. I think everything starts with being able to run the football."

The hot handle of the modern offense -- the Run-Pass Option (RPO) game -- applies to Briles' offense, but it's gone by a different name.

"A lot of people call it RPOs," Briles said. "We call it mixed plays. That's big in what we do, as far as our offense and reading defenders and either throwing it or handing it."

Briles uses a call sheet, but typically not during a series.

"I have a sheet," he said. "I look at it between series. Once we're calling a series, I try not to look at it. I know what I'm looking for in certain situations, so I kind of memorize those things. As we get into a drive, I already know what's gonna be called and try to do it with tempo."

Pittman, a longtime offensive line coach who has been an assistant head coach in recent seasons at Arkansas and Georgia, has given Briles free rein to install and call his schemes with the Razorbacks.

"To my understanding, it's going to be full autonomy," Briles said. "That's kind of the agreement in taking the job. Coach Pittman wants to be a CEO. He's coached a lot throughout his career. He'll be involved with offense, defense and special teams.

Briles said he studied the Arkansas roster before interviewing for the position. He said the Razorbacks are in the market for transfer quarterbacks or anyone who can help.

"I really can't talk about recruiting, but yeah, we'd always like to put more value onto our roster," he said.

Briles said his goal is to become a head coach.

"When it happens, it happens," he said. "It's definitely what I want to do. I feel like I'm ready to do that. But I also look at every opportunity as a learning experience.