King: These Hogs have a shot 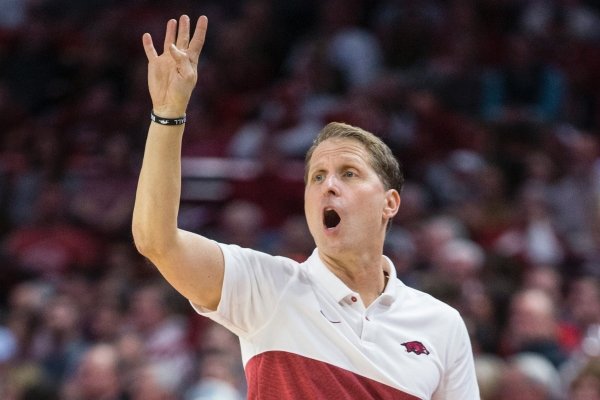 Such an imagined dissertation summarizes personal reaction to the notion that a too-small Arkansas is one of the SEC’s top four teams and is in line for a single-digit seed in the NCAA Tournament.

Originally, conventional wisdom said repercussions from the Razorbacks’ lack of an inside presence would prevent them from winning consistently, but “D” and threes have compensated for a variety of shortcomings.

Although Selection Sunday is two months away, Arkansas’ 13-2 record, including 2-1 in the SEC, validates immediate participation in the annual numbers game called Bracketology. For starters, know the squeeze is on Arkansas and several others in the SEC because early-season failures by four of the league favorites are almost certain to reduce the number of conference teams in the NCAA Tournament.

Last March, five of the seven SEC teams in the NCAA Tournament were among the top 20 seeds in the only postseason tournament that really matters. The previous year, a conference-record eight teams made the tournament.

At the end of the 2019 regular season, the new NCAA Evaluation Tool (NET) ranked the league third best in the country. After Saturday’s games, Auburn was No. 6 in the NET rankings, but the next-best SEC teams were Kentucky at 23, Arkansas at 25 and LSU at 29.

Those rankings are part of the reason RealTimeRPI.com says the SEC is sixth behind the Big 12, Big East, Big Ten, Atlantic Coast Conference and the Pac-12.

The Big 12 has three teams in the top 11 of the NET rankings, including No. 1 Baylor

The SEC’s rating reflects 15 losses — some of them befuddling — suffered by Kentucky, Florida, LSU and Tennessee. Ranked Nos. 2, 6, 22, and 28 in The Associated Press preseason poll, each of those teams lost at least three nonconference games.

• Nov. 12, Evansville 67, Kentucky 64: Tied for the third biggest upset in the last 15 years in college basketball, according to ESPN Stats and Info. The Purple Aces have since lost eight, including by 26 to 10-game loser Jacksonville State.

The cumulative effect of the losses is to mandate that SEC teams better .500 in conference play to be a serious contender for an NCAA Tournament bid. Last year 9-9 Florida got in; the year before, tournament qualifier Alabama was 8-10. Not this year.

Believing 10-8 to be a minimum, the importance of Arkansas beating Ole Miss after losing to LSU last week cannot be overstated.

After all, the formula for the Razorbacks and other NCAA hopefuls is to defeat some of the so-so teams on the road and post 7-2 or better at home. Along those lines, Kentucky and Auburn — likely to be at the top of the SEC in March — play in Fayetteville and losing at Baton Rouge days earlier and trailing by 11 in the second half at Oxford could have created self-doubts.

Instead, the Razorbacks competed to the end, creating turnovers and making threes. That winning formula sounds simple enough and the willingness of Musselman’s players to try hard is a staple, but Isaiah Joe won’t always make five triples in the final 20 minutes as he did in Oxford.

As for Joe, ignore his 11-of-18 from the field and circle his two steals late in the game - the first far from the basket and the second on the sideline after Ole Miss grabbed an offensive rebound. A scorer who plays defense means Musselman’s message resonates with his players.

Meanwhile, Joe Lunardi at ESPN and Jerry Palm at CBS are already cranking out 68-team brackets, although current efforts are more about generating buzz than accurately identifying first-round opponents. For example, last week Lunardi penciled in No. 6 Arkansas vs. No. 11 Indiana — unlikely because the selection committee works to avoid regular-season nonconference rematches in the first round.

Meanwhile, Tennessee and LSU winning by one apiece at home Saturday reminds that conference play is a twice-weekly roller coaster and that upcoming contests will be entertaining for the unbiased and agonizing for those with a rooting interest.