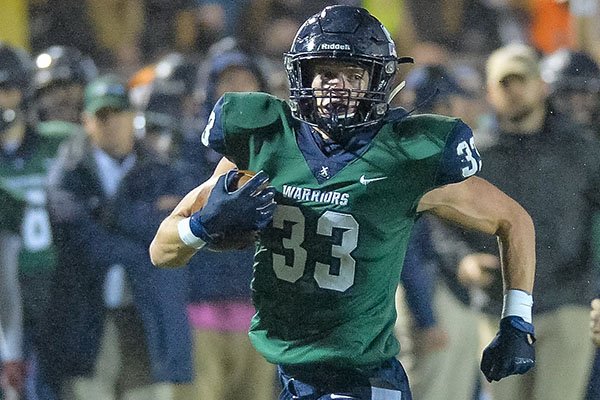 Little Rock Christian tight end Jackson Woodard (33) runs with the ball during a game against Wynne on Friday, Nov. 22, 2019, at Warrior Field in Little Rock.

FAYETTEVILLE — Arkansas may have just 25 spots for scholarships in the 2020 class, but new Razorbacks coach Sam Pittman is also trying to add to that by landing some of the state’s best players as preferred walk-ons.

Little Rock Christian linebacker Jackson Woodard (6-3, 200) announced Sunday that he has decided to be a Razorback PWO, fulfilling a dream of his.

Woodard had an offer from Virginia Military Institute as well as intererst from Ole Miss and Vanderbilt.

“All my life I have dreamed of being a Razorback,” Woodard said. “I have watched so much Razorback football, the ups and downs. My mom and dad graduated from Arkansas and my brother is up there right now.

“I love Arkansas football and I am excited to be a part of turning it around.”

“He had a phenomenal year for us,” Cohu said. “Jackson is a very physical defensive football player that can play both outside linebacker or inside linebacker. His ability to make big plays defensively puts him in an elite category. This season he also emerged as an offensive threat for us both receiving and rushing the football. His high-energy nature made him an excellent captain and leader for our team.”

Woodard helped his team win a state title as a junior and get back to the championship game as a senior.

“I grew about two inches my senior year and put on about 10-15 pounds and just really focused on hitting hard and smoking people and trying to all the time be my best,” Woodard said. “I'm concentrating on being able to read plays and just attack once I see it. I think I just need to put on about 20 more pounds, and I am still growing, work on staying aggressive and being the best I can.”

“Coach Cohu came three years ago and coach Lance Clark became the defensive coordinator these last two years,” Woodard said. “They both came from Alabama and instilled this physicality mentality, and tough guys win, which just means out-toughing everybody and never quitting. Really most of the games we won are just through physicality and giving everything we’ve got and not being scared to hit you in the mouth.

“And our offense is as prolific as ever. You just put those two together and we just have a great program now.”

Compton, who is set to visit Arkansas on Jan. 31-Feb. 2, was named to the Arkansas All-Preps first team after a senior season in which he had 33 tackles and 2 interceptions, of which he had 10 as a junior.

Thurman would be an early enrollee.

Woodard is excited about the opportunity to join a team coached by Pittman.

“I heard he was a great guy,” Woodard said. “I know he has always been super into the Razorbacks, which I love. I have heard he is an amazing coach and great at recruiting. He knows what he was doing, had great success when he was here the first time as offensive line coach and had great offensive lines at Georgia, too. I am excited to be a part of his team.”

The offer came about via new Arkansas linebackers coach Rion Rhoades, who was formerly the head coach at Hutchinson (Kan.) Community College the previous 13 years.

“We had a good conversation about who I am and who he was, about what I am looking forward to, about how he likes me," he said. "He told me to call him in a couple of days. I called him (Sunday) and he said after a good talk with Coach Pittman and Coach Odom, he said they really liked me and they wanted to give me a preferred walk-on offer.”