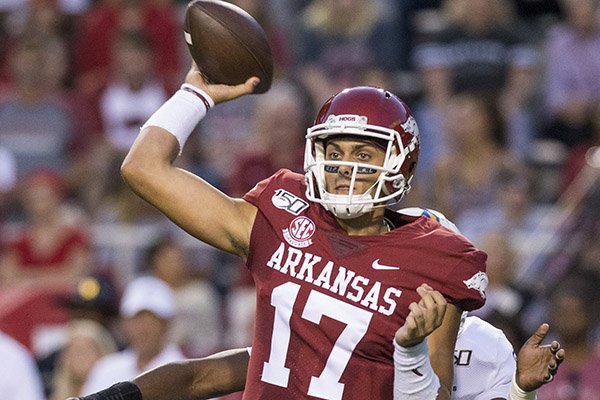 Arkansas quarterback Nick Starkel takes a snap during a game against San Jose State on Saturday, Sept. 21, 2019, in Fayetteville.

Starkel seemed to announce via social media Saturday he would play his senior season at San Jose State.

Rhett Lashlee, the recently hired offensive coordinator at Miami who served in the same position at Auburn in 2016, responded to a tweet by Starkel with a “congrats bro.” Starkel replied with a “Thanks Coach!”

Starkel is a two-time transfer, having come to the University of Arkansas last summer as a graduate transfer from Texas A&M. The Argyle, Texas, native had an erratic season during the final year of the Chad Morris’ era. He completed 96 of 179 passes for 1,152 yards, with 7 touchdowns and an SEC-high 10 interceptions.

Half of those interceptions came in a 31-24 loss to San Jose State on Sept. 21, in the Razorbacks’ first game against the Mountain West Conference opponent. Starkel was 28 of 50 for 356 yards, with 3 touchdowns and 5 interceptions.

That performance came on the heels of his best game as a Razorback. Starkel went the distance in a 55-34 victory over Colorado State, completing 20 of 35 passes for 305 yards, with 3 touchdowns and no interceptions.

The Razorbacks have been active at quarterback in the NCAA transfer portal since it came into existence Oct. 15, 2018. Arkansas lost its two main quarterback starters from 2018 — Ty Storey and Cole Kelley — in the portal while signing transfers Starkel and Ben Hicks.

New Arkansas Coach Sam Pittman and offensive coordinator Kendal Briles have said the Razorbacks would look for transfer quarterbacks during this offseason. There are three scholarship quarterbacks on the roster in junior Jack Lindsey, sophomore John Stephen Jones and freshman KJ Jefferson.

The Razorbacks started five different players at quarterback in the final five games of a 2-10 season in 2019.