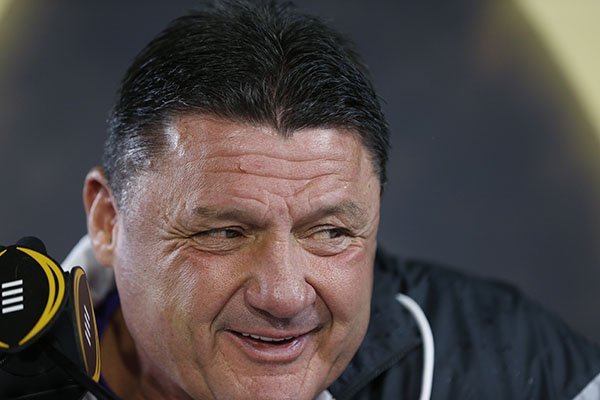 NEW ORLEANS — Skies were gray Saturday morning, and threats of tornadoes accompanied wind gusts of up to 75 mph.

Across the street, the Marriott served as the temporary home of the LSU Tigers, who bused into the Big Easy the night before. Clemson flew on a charter plane.

Two teams of Tigers who play in their own Death Valley.

They are not here for a bowl game.

There are no week-long festivities. No meat-eating contests between the teams. No amusement parks.

This is the grand finale of a football season. Two undefeated teams facing off in a winner-take-all national championship game.

It is like a home game for the SEC champions.

It is a familiar scene for the defending champions.

The two coaches arrived at this place through similar paths.

Clemson Coach Dabo Swinney was a wide receivers coach who served half a season as Clemson’s interim head coach in 2008 after Tommy Bowden was fired.

Former Arkansas Razorback football player and assistant athletic director Terry Don Phillips, who was the Clemson AD at the time, liked what he saw despite a 4-3 record and promoted Swinney to permanent head coach.

Ed Orgeron was dismissed at Ole Miss like a bad joke after the 2007 season, fought his way back and landed at LSU as an assistant in 2015. He took the reins as interim head coach in 2016 after Les Miles was fired.

Orgeron, to the surprise of Tigers Nation, was promoted to the full-time job, although then-AD Joe Alleva tried to hire others first. Orgeron was 6-2 as the interim coach.

Monday night in the Superdome in front of a standing-room-only crowd and with millions watching on TV, there will be almost four hours of football before one set of Tigers celebrates and the other leaves brokenhearted.

The Marriot lobby will be filled with LSU fans hoping to get a glimpse of their hometown heroes.

A family of fans sat by a second-floor window at the Sheraton on Saturday morning and watched the LSU Tigers board their buses minutes before 10 a.m. When the bus left, so did the family.

These are heady times for LSU fans.

They know it is one of the top-five jobs in the country, and that Louisiana produces, per capita, the most NFL players.

From the bayous to the northern borders, flags are being flown and cars are adorned with decals of Tigers and LSU.

It is a beautiful state with a reputation for shady politics and a fan base that arrives early — and parties so intensely Ole Miss is envious — and leaves late.

Most high school football players have two dreams growing up in the Creole State: play in the Superdome, where state high school championships are won, and play for the LSU Tigers.

A large handful of those kids will realize both dreams Monday.

The local police have brought in reinforcements from all over as they brace themselves for a crowd that will be at full strength by tonight. A crowd that could rival Mardi Gras.

The vast majority will be from this southern oasis, and they are seizing the moment.

This is Louisiana, not Alabama, that is playing for the national championship, and by Tuesday either a new team from the SEC will become king, or Clemson will be the new dynasty.

The bad weather is virtually ignored. The focus is football.