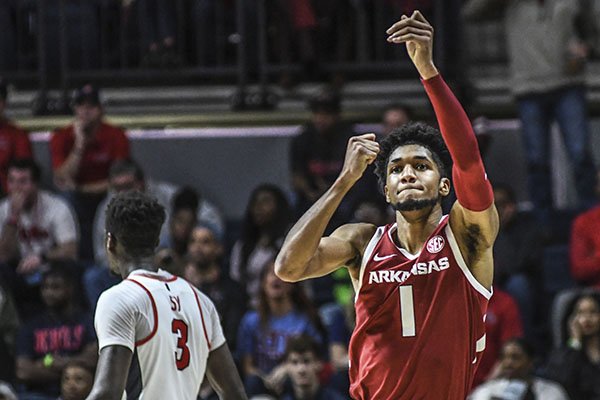 Joe, who matched a career high with 34 points, knocked down 7 of 13 attempts beyond the arc, sparking the Razorbacks' comeback efforts. In the second half alone, he connected on 5 of 7 from distance and poured in 26 points.

While it may not be all that surprising that Joe made seven 3s against the Rebels, which pushed him into seventh place in program history with 172 career makes, it is interesting considering which areas of the floor they came from.

Joe has been at his best from 3-point range this season when releasing on the left and right wings, shooting 40.7 and 41.6 percent, respectively. He had struggled, though, to find consistency in both corners (mid-lane extended).

But it wasn't just Joe. Arkansas as a team shot 21.8 percent (17 of 78) on corner 3s through December, according to shot chart data collected for each game.

"It’s interesting from an analytics standpoint," Razorbacks coach Eric Musselman said Monday. "In the NBA, almost player for player, team for team, the two corners are the highest (percentage shots). And then when you start going foul line extended or free throw line extended or above, the percentages drop.

"With our team, for whatever reason, we’re the exact opposite."

Joe entered Saturday's game 6 of 42 (14.3 percent) from 3 in the corners. Then he broke out against the Rebels, nearly doubling his season total.

The sophomore finished 3 of 3 in the left corner against the Rebels, burying two in the opening four minutes of the game as Arkansas jumped out to a 10-2 lead. Joe was later responsible, too, for a four-point play on an attempt from the same spot midway through the second half.

He also knocked down his lone attempt from the right corner, which cut Arkansas' deficit to 49-43 with 13:20 remaining. It was his first 3 from that spot since the win over Valparaiso in North Little Rock on Dec. 21.

Joe is now 3 of 24 beyond the arc in the right corner - opened the season missing his first 14 attempts - and 1 of 3 in conference play.

Musselman said it is essentially a matter of time before the Razorbacks begin finding more success from the corners.

"We certainly feel like not just Isaiah - any of our guys - we feel like those corner 3s we should be able to hit at a higher percentage and will, just based on playing more games," he added. "It all evens out at the end of the day.

"But yeah, we’ve been a little bit shocked with how well we’ve shot it from above the foul line extended and out, and surprised how we haven’t hit it at a high clip in the corners."

If Joe starts hitting corner 3s with greater consistency, the SEC should watch out.