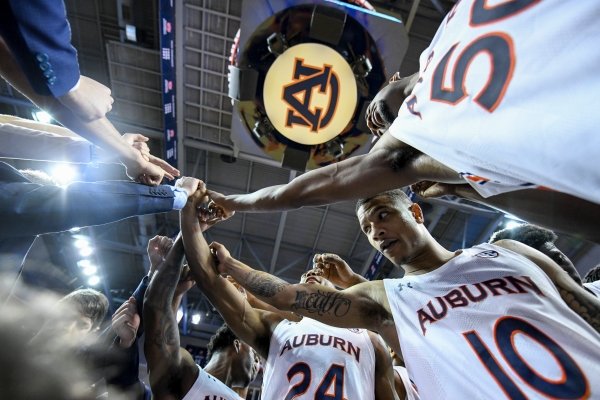 Auburn guard Samir Doughty (10) and the Tigers celebrate a win over Georgia in an NCAA college basketball game Saturday, Jan. 11 2020, in Auburn, Ala. (AP Photo/Julie Bennett)

FAYETTEVILLE -- Auburn is on a roll.

Their only loss in that span was a 63-62 setback to Virginia on Kyle Guy's three free throws with 0.6 seconds remaining in an NCAA Final Four game in Minneapolis on April 6.

Auburn (15-0, 3-0 SEC) moved up to No. 4 in The Associated Press Top 25 and stayed at No. 6 in the NCAA NET rankings Monday. The Tigers and San Diego State are the last remaining unbeaten teams in Division I men's basketball.

The Tigers' 15-game winning streak will be on the line late Wednesday in what is shaping up to be a barn burner of an Iron Bowl of hoops. Alabama will host the Tigers at 8 p.m. at Coleman Coliseum in a game set to be televised by ESPN2.

LSU guard Skylar Mays was 0-of-5 shooting for the first 19:56 of the second half Saturday, but the senior had the ball in his hands when the Tigers inbounded in their backcourt trailing Mississippi State 59-58 with four seconds left.

Mays had Nick Weatherspoon hounding him all the way in a fast drive up the floor that ended just inside the three-point arc. Mays whirled, jumped and dropped through a 20-footer as the final horn sounded to give LSU a 60-59 victory.

The Tigers remained unbeaten in SEC play, though their last two wins at the Maravich Assembly Center over Arkansas and Mississippi State came by a combined three points. Mays finished 4 of 11 for 11 points against the Bulldogs.

Sophomore guard Immanuel Quickley averaged 17 points, 5 rebounds, 2.5 assists and 1.5 steals in the Wildcats' wins over Alabama and Georgia. Quickley, from Havre de Grace, Md., made 11 of 20 shots, including 8 of 9 from three-point range, in the games to earn player of the week.

Tyrese Maxey, a 6-3 guard from Garland, Texas, averaged 15 points, 5.5 rebounds, 4.5 assists and 2.0 blocks in the Kentucky wins to earn freshman of the week. Maxey had a career-high 8 assists and 4 blocked shots to go along with a game-high-tying 17 points in the 78-69 victory at Georgia.

ESPN's Bracketology has just five SEC teams included in its latest projected NCAA Tournament field. The SEC teams projected to make the field are Auburn as a 2 seed, Arkansas (6), Kentucky (6), Florida (8) and LSU (11).

Missouri scored 51 first-half points, its highest in a game since joining the SEC in 2012, en route to a 91-75 thumping of Florida on Saturday.

The Tigers snapped a four-game losing streak to the Gators with their third win in the series. Missouri's last victory over Florida had been a 64-52 decision on Feb. 24, 2015, during a 9-23 season for the Tigers.

Florida allowed 90 or more points for just the sixth time since 2010.

Texas A&M has won two games in a row by decisive margins since falling in its SEC opener at Arkansas.

The Aggies rallied from a 10-point halftime deficit to surge past Ole Miss 57-47 last Tuesday, then crushed Vanderbilt 69-50 on Saturday. The Commodores were playing their first game without Aaron Nesmith, the SEC's top scorer at 23 points per game, who will miss substantial time with a stress fracture in his foot.

First-year Coach Buzz Williams' club is shooting a league-high 46.7% from the floor in SEC games, just ahead of Auburn at 46.2%.

The Gators were stomped 91-75 at Missouri in White's first shot at notching his 100th victory at Florida. White is on pace to reach the 100-win mark faster than any Florida coach except for Billy Donovan, who did it in 154 games in his fifth season.

White, also in his fifth season, will coach his 158th game with the Gators tonight at 6 against Ole Miss at ExacTech Arena.

Ole Miss Coach Kermit Davis lamented his club's tough opening SEC slate, which featured a road loss at Texas A&M and a home loss to Arkansas before the Rebels face Florida, LSU, Tennessee, Georgia and Auburn the rest of the month.

"Last year, I think we played the eighth-toughest schedule in the SEC," Davis said. "This year, it's No. 1. Just the luck of the draw. It's going to be taxing in January, a tough month. There are some great opportunities for our team."

LSU followed up its 53-24 rebound pounding of Arkansas on Wednesday with a puzzling net deficit on the glass on Saturday against Mississippi State.

The Bulldogs won the rebounding battle by a stunning plus-18 -- 49-31 -- against what had been the league's top club in rebounding differential.

Mississippi State moved into the league lead with an average of plus-7.4 rebounds per game, just ahead of Auburn (plus-7.1), while LSU fell into a tie for third (plus-6.1) with Kentucky.

The Razorbacks are last in the SEC in rebounding differential (minus-5.1), and their opponent on Wednesday, Vanderbilt, is the only other conference team with a negative differential. The Commodores are at minus-0.8.

Tennessee's Yves Pons extended his streak of games with a blocked shot to 15 when he rejected five shots in the Vols' 56-55 home victory against South Carolina on Saturday.

The 6-6 junior from Fuveau, France, has eight games with three or more blocks, including the past three.

• LSU's starting five combined to shoot 0 for 17 from three-point range as part of the team's 2 for 21 effort in the Tigers' 60-59 win over Mississippi State.

• Florida guard Scottie Lewis is 20 for 20 at the free-throw line in SEC games, the only perfect free-throw shooter in league play among qualifiers.

• Kentucky guard Immanuel Quickley has made 12 of 17 three-point tries (70.6%) in league games, well ahead of Tennessee's Josiah-Jordon James (61.5%) for the SEC lead.

• Alabama guard Kira Lewis has played 120 out of 130 available minutes in three SEC games, giving him the league lead at 40 minutes per game over Arkansas guards Jimmy Whitt (39.0) and Mason Jones (38.0), and Lewis' teammate John Petty (38.0). Alabama had a double overtime game against Florida on Jan. 4.

The NCAA instituted last year a new rating system called the NET rankings, which took the place of the Ratings Percentage Index. An acronym for NCAA Evaluation Tool, the NET rankings take into account game results, strength of schedule, game location, scoring margin, net offensive and defensive efficiency and the quality of wins and losses.

"We worked so hard to keep it at eight, and it was gone in 20 seconds." -- Ole Miss Coach Kermit Davis on losing a second-half lead to Arkansas

"When the bench starts to play like that, we have a chance to be a pretty good ball club." -- Auburn Coach Bruce Pearl after his reserves outscored Georgia's 34-13 on Saturday

Consecutive wins for Kentucky in its series against Georgia