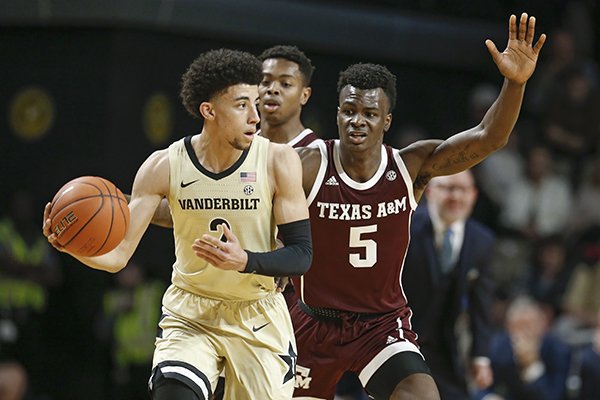 FAYETTEVILLE -- Nobody has had it rougher in SEC basketball than Vanderbilt over the past year.

After the injury loss last year of star Darius Garland after five games that led to a winless conference run, the hiring of former NBA great Jerry Stackhouse to replace Bryce Drew as head coach, and a knee injury that has sidelined senior forward Clevon Brown the past six games, the Commodores were dealt another gut punch Saturday.

CHALK TALK Arkansas has a 15-3 home record against the Commodores, whom the Razorbacks have beaten in 8 of their past 9 meetings. … The teams have two common opponents: Texas A&M and Tulsa. The Razorbacks are 2-0 against those teams, downing Tulsa 98-79 and Texas A&M 69-59. The Commodores are 0-2, falling 67-58 to the Golden Hurricane and 69-50 to the Aggies, both at Memorial Gym. … Vanderbilt has lost guard Aaron Nesmith, the SEC’s leading scorer (23.0 ppg) who ranks sixth nationally, likely for the season with a stress fracture in his foot.

Aaron Nesmith, the 6-6 sophomore who ranked sixth nationally with 23 points per game and first with 4.3 made three-pointers per game, was ruled out for probably the rest of the season with what is reported as a stress fracture in his foot.

Eric Musselman, who would become the first first-year Razorback coach to start with a 14-2 record with a win, said his club will not look past the Commodores to Saturday's home game against No. 10 Kentucky.

"I mean, we've got one thing to worry about, and it's how do we get ready for Wednesday's game," Musselman said. "That's it. It's the most important game on our schedule."

Vanderbilt dropped its SEC home opener 69-50 to Texas A&M on the day the Nesmith news broke. The Commodores shot a season-low 30%.

The Aggies hounded guard Saben Lee, the Commodores' go-to scorer in Nesmith's absence, into a 1-of-5 shooting performance and 4 points.

"We've got a tough, tough group of guys out there, but again it was a tough blow, understanding that our leader and our best player ... is probably no longer going to be with us," Stackhouse said.

Stackhouse said Saturday it would be good for the team to have a day to come to grips with Nesmith's loss, then show them the positives from the loss to Texas A&M.

Despite shooting 5 of 30 from three-point range against Texas A&M, the Commodores are still the SEC's top three-point shooting team at 37.5%. They'll face an Arkansas club that continues to lead the country in three-point defense by holding opponents to 22.6% shooting.

Musselman would like to avoid that kind of outcome.

"They played Auburn great the other night on the road," he said. "We have to get ready to figure out how to play Vandy. It's plain and simple."

Musselman noted a team's identity changes when it is without a top player.

"But having said that, it opens up other opportunities for other people," he said. "The night Mason [Jones] couldn't play for us, someone else got his shots. Somebody is going to get [Nesmith's] shots, and some of those shots are going to go in. That's just the nature of it.

"They're a dangerous team," Musselman said. "They are. I think every league game is just so hard to win that if you don't come mentally ready and physically ready, you're not going to win."