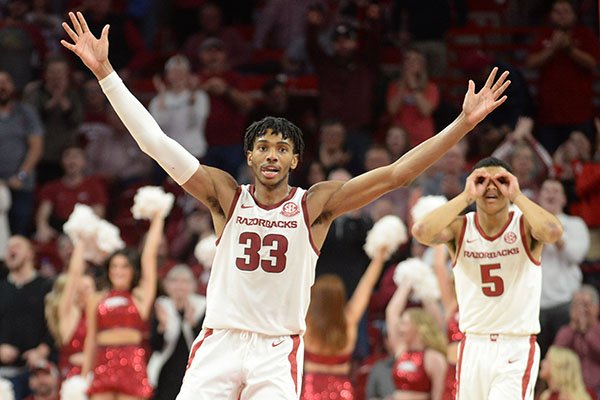 FAYETTEVILLE -- Add Jimmy Whitt to the 30-point club for the University of Arkansas men's basketball program.

Whitt, a 6-3 senior guard, scored a career-high 30 points to lead the Razorbacks to a 75-55 victory over Vanderbilt on Wednesday night at Walton Arena before an announced crowd of 14,231.

"The amazing thing is I didn't call one play for him tonight," Arkansas Coach Eric Mussleman said of Whitt's offensive performance. "Not one play.

"He just figured out how to find open gaps, and he catches it and releases it over people. He's really one of the most efficient players and unique players that I've ever coached."

But after Whitt missed a jumper in the lane with 1:25 left when he caught a pass from Jalen Harris, he stole the ball from Saben Lee and scored on a fast-break layup.

"My teammates wanted me to get it," Whitt said of the 30-point mark. "I told them I wasn't really worried about it.

"It came down to the last possession and J5 [Harris] said he was going to come to me. I missed the attempt for him, but I was able to get a steal right there at the end, and they were just excited for me."

After the basket, Whitt made a 3-0 sign with his fingers and thumb to signify his scoring milestone.

"I was just talking to the guys on the bench," Whitt said.

Jones scored 41 points against Tulsa and 32 against Rice. Joe scored 34 at Ole Miss and 33 against Texas Southern.

Arkansas has had three players score 30 or more points in a game in back-to-back seasons. Jones, Joe and Daniel Gafford each reached the mark during the 2018-19 season.

"I think it shows versatility," Whitt said of having a trio of 30-point scorers. "We have a lot of weapons on the offensive end, and I think it makes us that much harder to guard."

Reggie Chaney, a sophomore forward, matched his career-high with 14 points off the bench for the Razorbacks (14-2, 3-1 SEC). Desi Sills, a sophomore guard, had 13 points and a career-high seven rebounds.

Joe, a sophomore guard who came into the game averaging 18.2 points, scored all 12 of his points against Vanderbilt in the second half. Jones, a junior guard averaging 19.4 points, scored one point -- his low in two seasons at Arkansas.

"Jimmy Whitt will definitely be a lot more prominent on our scouting report the next time around," Vanderbilt Coach Jerry Stackhouse said. "I know that.

"I think we obviously were coming into the game thinking about Isaiah Joe and Mason Jones, but [Whitt] did everything for them tonight. He rebounded the ball, and every time the offense stalled any, he was the guy that was making big shots for them."

Whitt's previous scoring high was 24 points, which he had against South Dakota this season and against Cincinnati last season when he played at SMU before returning to Arkansas as a graduate transfer. He played at Arkansas as a freshman during the 2015-16 season, then transferred to SMU.

When Whitt decided to explore his options as a graduate transfer, he decided to come back to Arkansas and play for Musselman, who was Nevada's coach the previous four seasons.

"I think it's awesome that he trusted us," Musselman said. "He left a great situation. He was playing a lot of minutes at SMU for a really good coach [Tim Jankovich] and a really good program.

"So I'm really glad for him that this has worked out where he has such a good role."

"I thought without Whitt's play in the first half that we could have gotten a little separation," Stackhouse said. "But he definitely held it together for them in the first half, and then in the second half Joe came out and we forgot about his prowess behind the three-point line."

Joe hit 4 of 7 three-pointers in the second half.

"I thought we had to pick that guy up at half court," Stackhouse said. "And he stepped into a couple of threes and got a rhythm, and that was really the separation of the game."

Vanderbilt (8-8, 0-3) didn't pull closer than 10 points the rest of the game as the Commodores lost their 23rd consecutive SEC game.

While Jones struggled to score, he had 8 assists, 7 rebounds and 1 steal.

"I think with the team setup that we have, we know a lot of teams are going to try to focus in on our two top guys, so I think I was able to just take advantage tonight of those gray areas," Whitt said. "Get behind the defense's eyes, get into spots that I'm comfortable with."

Whitt started 6 of 7 from the field.

"I think scoring is more of a rhythm than anything else," Whitt said. "So when you can come out and hit your first couple of shots, you get that confidence. When you're getting shots you like, and you feel like you're in the zone, you just ride it. Tonight I was able to ride it for 40 minutes."

Whitt, who averaged 30.6 points as a high school senior at Columbia (Mo.) Hickman, finally got 30 in his fifth year as a college player.

"I don't think I've seen 30 points by name in five years, so it's pretty cool," Whitt said. "It's special that I could come here with these fans and with this group of guys and be able to reach a milestone like that."

KEY STAT The Razorbacks outscored the Commodores 18-4 in points off turnovers.

UP NEXT Arkansas plays No. 10 Kentucky at 3 p.m. Saturday at Walton Arena in Fayetteville.

CORRECTION: The last season that the Arkansas Razorbacks basketball team had three players score 30 points or more in a game before Mason Jones, Isaiah Joe and Jimmy Whitt did so this season was in 2018-19 when Jones, Joe and Daniel Gafford accomplished the feat. The statistic was incorrectly reported in an earlier version of this story.