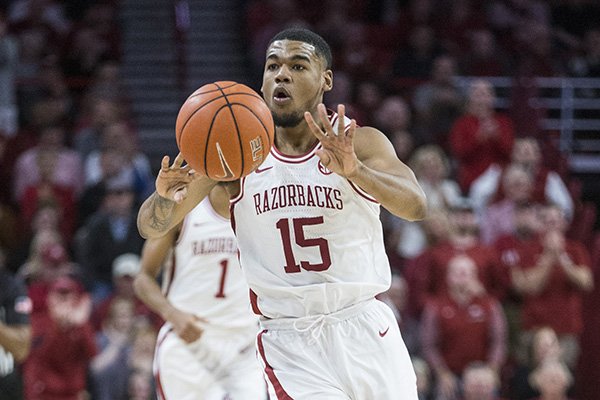 Arkansas guard Mason Jones (15) is shown during a game against Texas A&M on Saturday, Jan. 4, 2020, in Fayetteville.

FAYETTEVILLE — Arkansas guard Mason Jones saw the best scoring run of his Razorbacks career come to an end on Wednesday against Vanderbilt.

Entering the game, Jones had reached double figures in six consecutive games dating back to Dec. 14 when he dropped 41 points in a 98-79 win over Tulsa. He finished with just one point against the Commodores and did not make a shot from the floor (0-for-7) for only the second time in 49 games.

Still, Jones' fingerprints were all over Arkansas' 14th win of the season. The junior recorded seven rebounds, one off the team high, and eight assists in 31 minutes.

The Razorbacks outscored Vanderbilt by 17 points when he was in the lineup.

"To think that you can play a guy at the power forward spot and he’s out running middle pick-and-roll, we all know he’s a great scorer, but you can really credit him with his ability to find open men and be a willing passer even though he’s one of our premier scorers," said Arkansas coach Eric Musselman, who added that the team finished with 206 passes. "Certainly really proud of how he did not force the issue.

"His shots were not falling, but I thought he did a really good job of feeding people, and he did that last game as well."

Jones handed out a career-high nine assists in the 76-72 win at Ole Miss last Saturday, and his eight against Vanderbilt give him 17 in Arkansas' last two games. That is the top mark in the SEC for any player in that span.

Only three other players in the league have 10 or more since last weekend. Kentucky guard Ashton Hagans, who will make his way to Bud Walton Arena on Saturday with the No. 10 Wildcats, has 16 while Florida's Andrew Nembhard and Trendon Watford of LSU have 10 apiece.

The Rebels have nine total assists in their last two games.

Jones' nine dimes against Ole Miss led to 26 points for the Razorbacks, and six of Isaiah Joe's seven 3-pointers - which included a four-point play - were assisted by Jones. He also found guard Desi Sills for buckets twice, creating five points, and Adrio Bailey for a two-hand slam running middle pick-and-roll.

"That’s great player versatility," said Whitt, who scored a career-high 30 points against Vanderbilt. "Mason knows that teams are going to try to lock in on him, and he’s a really unselfish player. When he knows that, he’s not going to force it.

Jones is among the league leaders in assist rate through four conference games, according to KenPom analytics. He has assisted on 30.3 percent of Arkansas' scores when in the lineup, good for No. 6 in the SEC. For the season, that figure is 22.5 percent, which is a team high.

The Razorbacks, as a team, have assisted on 51 percent of their buckets in SEC games.

Jones appeared hesitant at times Wednesday to pull the trigger on perimeter jumpers or look for his own shot and instead opted to get teammates involved.

While the assists are a plus, Musselman also wants Jones to be aggressive as a scorer, too. After not releasing a wide open 3-pointer in front of the Arkansas bench, Musselman was visibly frustrated with Jones.

"I don’t know how many people can read lips, but there was one point where I told him I wanted him to shoot the ball and not pass up open jumpshots," he added. "Sometimes he does that. He’s got to be shot-ready."