Back in the game: Former Hogs coach Bobby Petrino introduced at Missouri State 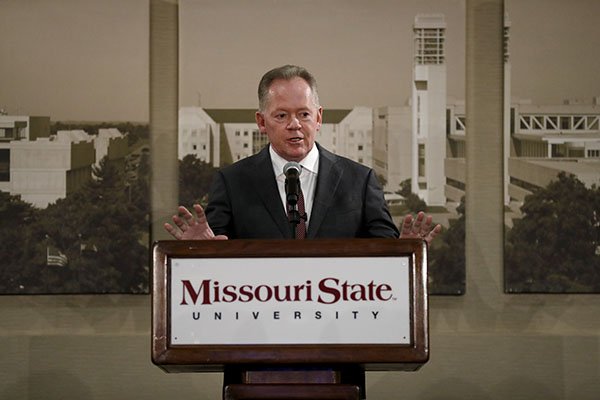 Bobby Petrino is introduced as the new football at Missouri State during a news conference Thursday, Jan. 16, 2020, in Springfield, Mo. Petrino has a 119-56 record in 14 seasons at Arkansas, Western Kentucky and Louisville and replaces Dave Steckel who was fired after winning just 13 games in five seasons. (AP Photo/Jeff Roberson)

SPRINGFIELD, Mo. -- Bobby Petrino could have hung up his whistle after a disastrous 2-8 year at Louisville before his in-season firing in 2018.

He doesn't need the money after agreeing to part ways with the Cardinals (for the third time in his career) for a reported buyout of $14 million.

But the 58-year-old Petrino, with a college record of 119-56, has coaching in his veins and he's not ready to call it a career.

The former University of Arkansas head coach, who led the Razorbacks to a No. 3 ranking in the Bowl Championship Series during a sublime 21-5 run in 2010-11 before a motorcycle wreck briefly derailed his career, has a different primary objective now.

Petrino's aim isn't to win the College Football Playoff. His readjusted sights are on winning a national title in the Football Championship Subdivision at Missouri State.

Petrino took his sixth head coaching job Wednesday, his fifth if you count his two stints at Louisville, and talked as if it would be his last. Speaking inside the sparkling JQH Arena on the Missouri State campus Thursday morning, Petrino referenced a conversation he had the previous night with Bears Athletic Director Kyle Moats.

"Like I told Kyle, 'If you're going to write a script, let's write a script like this," Petrino said. "I'd come here, I'd be very successful, I decide eight or 10 years from now whether I still want to coach football with a national championship in my pocket. That's what I want to see happen."

Petrino was asked about his unsavory departures, though not in specifics.

Those departures include the one with three games left in his lone season as an NFL head coach with the Atlanta Falcons in 2007 to take the Arkansas job; his firing after UA officials discovered his mistress was aboard the crashed Harley-Davidson motorcycle on April 1, 2012, and that he had hired her to a staff position and given her $20,000 to help buy a car; the messy last year at Louisville when he finally made it to a fifth-consecutive year in the same position.

"One of the things I'm going to be able to teach our players is that you're always going to have obstacles to overcome," Petrino said.

"Certainly I made a mistake when I was at the University of Arkansas. I was fortunate enough to have a great wife and a great family and stay together and work forward. That's what we did."

Petrino will have his work cut out at Missouri State, which competes in the rugged Missouri Valley Conference. The Bears had a 1-10 record last season, have not posted a winning record since 2009, and haven't gone to the FCS playoffs since 1990.

Missouri State President Clif Smart said hiring a difference-maker as a football coach was the driving objective for he and Moats, and that they had no second thoughts considering Petrino's past.

"We're convinced he's a different guy than he was eight years ago," Smart said. "Since eight years ago, he's led two FBS programs without incident. In my book, as a guy who lives in a glass house, I'm not throwing rocks at something that happened eight years ago when you have demonstrated that you are a different person."

Smart, who has an extensive background in Arkansas along with his Little Rock native wife, Gail, quoted a conversation he had with his long-time friend Larry Benz, chairman of the University of Louisville board of trustees.

Smart said he believes the Missouri State family will jump on board with Petrino.

"Yesterday the national guys beat us all up for doing this," he said. "Ninety-eight percent of the reaction from our campus, from Springfield and around the state, has been positive.

"Guys, we just made a tremendous hire that gives us an opportunity to change the trajectory of our program and raise the profile of the university. ... There's going to be excitement again when we're playing football in the fall. This is going to be the place to be on Saturdays."

Petrino, accompanied at the news conference by his wife Becky, said he got stir crazy in his year off from football.

"Being away from the game for a year was difficult," he said. "It's never been about a job for me. It's been about a way of life."

Petrino co-authored a book on offensive football in 2019, worked on his golf game, visited his six grandchildren with Becky, and watched football extensively to stay up on the game.

It's clearly not about the money now.

Petrino agreed to a 5-year deal at Missouri State that will pay him $250,000 per year, according to the Springfield News-Leader, and carry built-in one-year extensions for every year that the Bears make the playoffs. He agreed to a reduction in salary to pitch in to his assistant coaches pool, and he has pledged money on a yearly basis to add to it.

"Salary pool is an issue, and he talked to you about how we bumped that," Moats said. "He's also going to donate $70,000 a year, out of his pocket, for the assistant coaches pool. That was unsolicited by me. That's what he wants to do. He's vested in this place. He wants to make this work."

Petrino said he's getting back in the game to keep doing "what I've done all my life. It's been a life of football and family and teams, so I get to continue to do that."

Petrino, speaking to the Arkansas Democrat-Gazette, said he was unaware the Bears are scheduled to visit Arkansas in 2022.

"No, I didn't," he said. "I'm just hoping I can be alive three years from now. You know how that goes. But I'm just happy to be here and working hard for this."

Petrino added, "I'm kind of getting on the other side of the hill a little bit. I feel great though. I feel very young, very energized. And this is the job that I want."