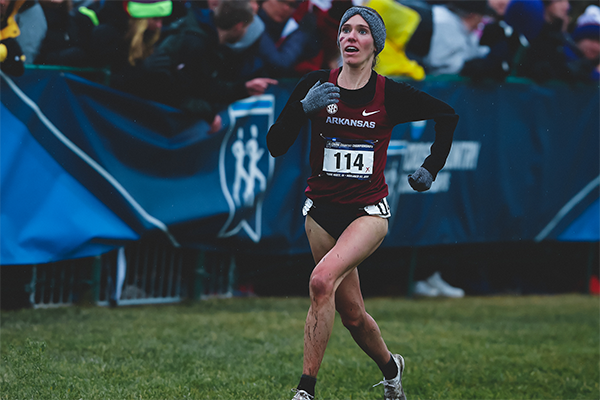 FAYETTEVILLE — A broken leg was the the break Katie Izzo needed in her running career.

Of course, Izzo, then at Cal Poly, didn’t know so at the time. When she broke her right leg in multiple places while running on a stress fracture during the NCAA West Regionals on Nov. 11, 2016, in Sacramento, she didn’t know if she would ever run again.

“My tibia and fibula bones snapped in the middle of the race, and a week later I had surgery,” Izzo said. “It was crazy.”

Doctors inserted a 12-inch titanium rod in Izzo’s leg to help correct the injury. She said she forgets about the rod often, but her teammates are quick to remind her when they call her “the bionic woman, which is kind of funny," she said.

Izzo didn’t run or exercise for seven months following the injury and, when coupled with another injury early in 2018, redshirted five consecutive cross country and track and field seasons beginning with the 2017 indoor season.

“I took it completely off and let my body just completely heal,” she said. “After that I had a renewed passion for running and realized how much I missed it. Since then I told myself I would never take it for granted.

“I believed I would be back and knew I would come back stronger. I knew God had better plans for me. It was all a blessing in disguise. If that hadn’t have happened, I never would have come to Arkansas.

“It was just a dream come true, really.”

Izzo’s struggles are well behind her now. She is coming off a banner cross country season in which she won the SEC individual championship and had a third-place finish at the NCAA meet — the Razorbacks’ top finisher on the day Arkansas won its first cross country national championship as a team.

At the finish line, Izzo cried.

“Tears of joy,” she said. “I’ve rarely experienced that. It was probably one of the best days of my life.”

Izzo’s third-place finish at the cross country meet was 79 places ahead of her 82nd-place finish for Cal Poly at the NCAA meet a year earlier. When her former Cal Poly coaches saw her run at the Nuttycombe Invitational in October, they were amazed at her transformation, according to Arkansas coach Lance Harter.

“They couldn’t believe how she was running in such a short period of time,” Harter said.

Harter said Arkansas’ doctors put Izzo in orthotics, which reduced some aches and pains she had endured in previous seasons in California.

“Our medical team was able to put her together,” Harter said. “She is just absolutely lights out compared to last year.

“She has had to overcome a lot and just watching her race, she’s just so tough. Now that she’s tough and pain free and able to train a little bit…I think she has a real bright future.”

Izzo received a sixth year of eligibility from the NCAA for the indoor and outdoor track seasons, so she will be able to run two of each season at Arkansas, beginning with the indoor season that begins Friday with the Arkansas Invitational at Tyson Indoor Track Center in Fayetteville.

Izzo is entered to run the mile Friday. Among the other teams scheduled to attend include Oklahoma State, Arkansas-Little Rock, Tulsa, Oral Roberts and Missouri State.

“I think that’s going to be really fun to watch her evolution continue,” Harter said.

Harter was key in Izzo’s decision to come to Fayetteville, more than 1,500 miles from her hometown of Torrance in Southern California. Harter is a coaching icon at Cal Poly, where he won 14 NCAA championships in the 1980s before leaving to coach the Razorbacks.

He won two more NCAA titles in the first half of 2019 — indoors and outdoors — while Izzo watched from afar as a beaming commitment.

“After the (recruiting) visit, I was completely sold on the team dynamics and just how welcoming everyone was. Just the environment, I could tell it was a really special place.”

Arkansas’ win at the cross country nationals in November gave the Razorbacks the rare triple crown — consecutive NCAA championships in all three sports. Only two other teams had accomplished that feat in women’s running sports.

“I just wanted to contribute to that,” Izzo said. “I remember when Arkansas won indoor and outdoor nationals, and how excited I was because I knew that was going to be my future team. I was just so proud of how well the girls were doing, so I’m just honored to have come into the program at the right time. It’s cool. I still feel like I’m part of a historic moment, even if it’s just for a third of it.”

A previous version of this story was published in Hawgs Illustrated