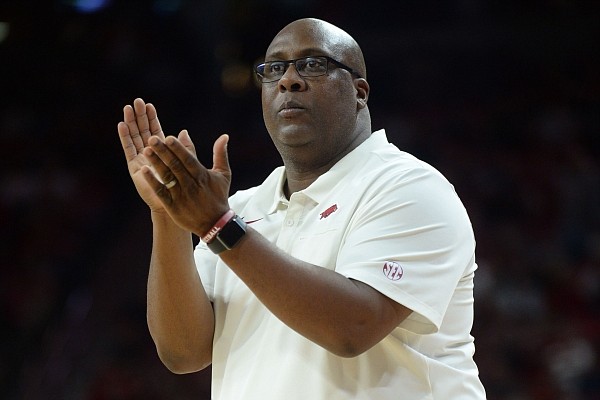 Arkansas assistant coach Corey Williams directs his players Friday, Nov. 22, 2019, during the second half of play against South Dakota in Bud Walton Arena in Fayetteville.

FAYETTEVILLE — Corey Williams describes the only in-game pass he ever threw in his football career as a beautiful spiral, nice and tight.

It came in a relief appearance during his freshman year of high school. Nonetheless, he was finally getting a chance to showcase his ability as a quarterback. Williams took the snap, surveyed the field and spotted a receiver making his way across the middle.

He fired the pass in a teammate’s direction, only for it to be dropped. Williams, who now admits to not being very good at the position considering he fumbled each time he was sacked, he said, finished 0 -for-1 passing as a quarterback.

“The crazy thing is if I would have been given the opportunity … you know how it is in high school,” Williams told WholeHogSports. “Some guys are slated to be that quarterback guy. I was not that guy.”

But Williams’ story as a football player didn’t end there. Far from it, actually.

On the day of the 1992 NFL Draft, Williams wasn’t exactly tuned in, and he didn’t believe he had much reason to be. Williams slept as much of the draft unfolded.

Then his phone rang. On the other end of the line was Marty Schottenheimer, then the head coach of the Kansas City Chiefs who went on to win 101 games over 10 seasons with the franchise.

“He asked me if I wanted to play football, and I tell him yes,” Williams recalled. “He calls back and says, ‘We’re going to draft you.’ So I got drafted in the 12th round by the Kansas City Chiefs. The other thing that was ironic was nobody on the (Oklahoma State) football team got drafted that year. I was the only one that got drafted, and I was asleep during the draft.

“Think about that. I’m asleep. But, you know, I’m a spiritual guy, and God says he takes the foolish things of the world to confound the wise and even in their wisdom they cannot understand the difference. That was God. That was not Corey Williams. That was all Him. He did that.”

On April 24, 2019, Williams became the first assistant coach hired to Arkansas coach Eric Musselman’s staff. Williams spent the previous six seasons as head coach at Stetson and finished his tenure with a 58-133 record. He was fired last March following a 7-24 season that included a 3-13 mark in the Atlantic Sun Conference.

At the time of the hire, Musselman said Williams’ experience as a head coach and knowledge of the game having played professionally both in the NBA and in Taiwan would help the Razorbacks compete at a championship level. He also played and coached under a number of the game’s best minds, including Phil Jackson, Eddie Sutton, Leonard Hamilton and Bill Self.

“They’re just different. They have a different way of getting results, but they get results,” Williams said. “Different styles and different philosophies, but still the same common goal, and that is to win games. There’s the old notion that there’s a bunch of ways to skin a cat, and it’s true. You don’t have to do it one way.

It was at Oklahoma State where his relationship with Sutton blossomed. Williams, who wrapped his college career eighth on the school’s all-time scoring list, was a starter for the Cowboys in his first two seasons on campus, but in Year 3, he was designated to a role off the bench.

In the moment, Williams wasn’t too fond of the move, but it drove him to play as hard as ever, he said. The following year, Williams’ senior year, Sutton rewarded him with a spot in the starting lineup. When he returned to Stillwater in 1994-95 as a student assistant, their bond grew even stronger during the team’s Final Four run.

For years after they parted ways, Sutton called Williams on his birthday and sang to him over the phone.

“I thought it was awesome. He’s a special man to me,” said Williams, who has a Sutton bobblehead proudly displayed in his office in the Basketball Performance Center. “Certainly coming back to a place where he coached is awesome for me.”

On Oct. 5, Arkansas honored and recognized former coach Nolan Richardson, responsible for the program’s lone national championship, and Sutton prior to the Razorbacks’ annual Red-White game, which was held in Barnhill Arena. Sutton was 120-8 in the arena over 11 seasons at Arkansas.

Williams was flooded with memories as he caught up with Sutton, who in declining health was bound to a wheelchair.

“It was cool,” he added. “When he saw me, he smiled. I told him I loved him and, ‘You’ve always been a father figure in my life.’ He smiled. He just smiled. For me, that was him saying, ‘That’s my son.’ I always felt like that.”

The feeling was similar with Hamilton, who has led Florida State basketball since the 2002-03 season and appeared in two Sweet 16s and an Elite Eight. Williams describes him as a tireless worker, one of the great minds in the game and an unbelievable recruiter who happens to be the youngest-looking 71-year-old around.

According to Williams, Hamilton’s longevity in the game can be attributed to personal relationships he developed with players over time, knowing when to push them and when to take a step back. He, too, treated Williams as his own son.

“The interesting thing about him is when I came back to coach with him, I was probably about 30-something, mid-30s, and he still looked at me like I was an 18-year-old guy, a kid,” said Williams, who recently celebrated 25 years of marriage with his wife Nicole. “I had to remind him, ‘Coach, I got kids. I’m married.’ That was interesting, getting to that point where I’m not the 18-year-old boy you recruited to Oklahoma State.

Williams’ time with the Chiefs was short-lived. He was also drafted in the second round by the Chicago Bulls and joined the franchise for the 1992-93 season. Led by Jackson, Michael Jordan and Scottie Pippen, the Bulls went on to win the 1993 NBA title by downing Charles Barkley, Dan Majerle and the Phoenix Suns in six games in the finals.

Williams’ lone season in Chicago was an interesting one, to say the least, and one film session will always be burned into his memory. Upon entering the film room one day, Williams, who averaged 6.9 minutes per game, noticed a child-sized chair set up alongside three of average size on the front row.

“I was like, ‘Look at that crazy chair. Who’s sitting in that chair?’” Williams said. “(Jackson) was like, ‘Pee Wee, that’s your chair. That’s where you are in the hierarchy of things here with the Bulls.’

“So I sat in this little bitty chair the whole film, watching film with the guys. Those guys were giving me grief, but it was all in fun. Phil was unique. He was a unique man.”

The overarching, defining quality of the most influential coaches in Williams’ basketball life is passion, and he believes without a shadow of a doubt he has been placed at Arkansas to make an impact in the lives of those around him.

Life is about successes, failures, obstacles, triumphs and being knocked down and getting back up, he said. Williams feels blessed to be able to use his spiritual background to make a difference.

“People say that as a cliche, but this is an opportunity I have to be able to help young men fulfill their dreams, get to their destiny and impart wisdom to them as it relates to this game,” he added. “They have someone who is passionate and they feel like cares. I genuinely care about them as a person, their well-being, and just making sure they get everything they can out of life.

“I think people can feel that. I think it’s important that they see the light of Christ in me.”

Entering Saturday’s showdown with No. 10 Kentucky in Bud Walton Arena, Williams has watched the Razorbacks improve by leaps and bounds since the summer. Buy in, he said, has been phenomenal, evidenced by a 14-2 start.

“I think what Coach Musselman has put in and the culture that he’s established - or is starting to establish here - is taking root,” Williams added. “I think these guys are starting to get it. They’ll continue to get better.”