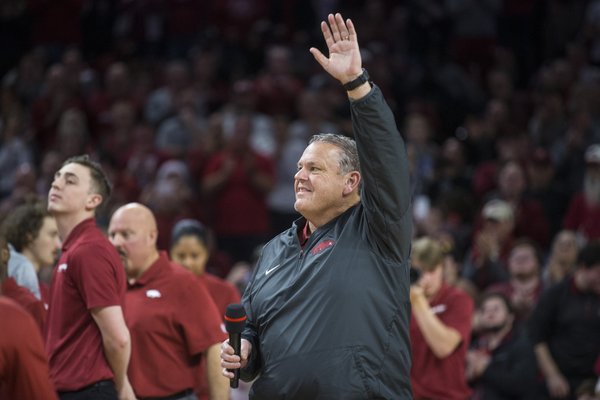 Arkansas football head coach Sam Pittman greets fans Saturday during a timeout in the basketball game at Walton Arena in Fayetteville. Pittman has a tough recruiting job ahead with the early signing period, which starts today and runs through Friday. - Photo by Ben Goff of the NWA Democrat-Gazette

Defensive end Eric Thomas committed to Arkansas on Saturday - the second to pledge to the Razorbacks during an official visit this weekend.

Linebacker Jacorrei Turner of Atlanta committed to Arkansas earlier in the day.

Arkansas extended a scholarship offer to Thomas on Dec. 22. He had an offer from Colorado State prior to the firing of Mike Bobo as the Rams coach.

"He could be a true steal," Booker T. Washington Coach Tommy Joe Whiddon said in an earlier interview. "There's no doubt he's going to be a really good football player, but I think he has the potential to be one of those guys like, 'Where in the world did he come from? How did nobody know about this kid out of high school?' I think he has a chance to be a special player."