Richards, No. 10 Kentucky down Arkansas 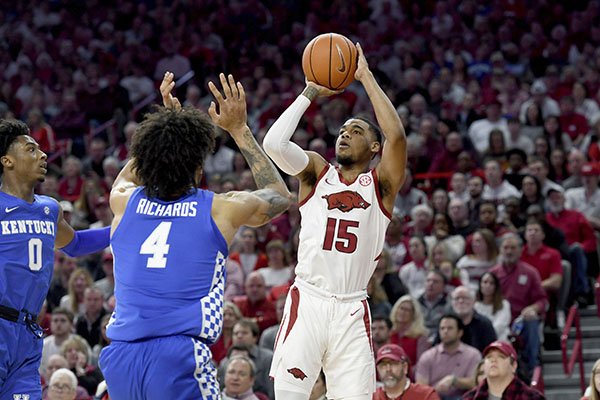 Arkansas guard Mason Jones (15) pulls up to shoot over Kentucky defenders Nick Richards (4) and Ashton Hagans (0) during the first half of an NCAA college basketball game, Saturday, Jan. 18, 2020, in Fayetteville. (AP Photo/Michael Woods)

FAYETTEVILLE — Kentucky closed the game on a 27-17 run and defeated Arkansas 73-66 Saturday at Bud Walton Arena.

The Wildcats (13-4, 4-1 SEC) played spirited after their head coach, John Calipari, was ejected with consecutive technical fouls during a stoppage in play with 8:19 remaining.

Arkansas’ Mason Jones hit 3 of 4 technical free throws to put the Razorbacks ahead 49-46, but Kentucky responded with 15 consecutive points to suck the life out of the raucous, sold-out Bud Walton Arena crowd.

The Razorbacks (14-3, 3-2 SEC) had a 12-game home win streak snapped and lost in Fayetteville for the first time this season.

Kentucky won its eighth consecutive game against Arkansas, two games shy of the Wildcats’ longest win streak in the series. Kentucky won 10 straight over the Razorbacks between 2001 and 2010.

The Wildcats out-rebounded the Razorbacks 47-29.

The Razorbacks struggled offensively against the much larger Wildcats, converting on just 19 of 57 field goal attempts. Arkansas also struggled on its unguarded shots with a 20-for-30 performance at the free throw line.

Kentucky was a more effective 24-for-54 from the field. The Wildcats made 20 of 27 free throws.

Arkansas returns to action Wednesday with a 6 p.m. game at Mississippi State.

The Wildcats turned it on down the stretch following the ejection of coach John Calipari and handed the Razorbacks a tough loss in Bud Walton Arena on Saturday.

Arkansas falls to 14-3 overall and 3-2 in SEC play entering a road game at Mississippi State on Wednesday. Kentucky improves to 13-4 and 4-1 in the conference.

Mason Jones scored a team-high 19 points for Arkansas and Isaiah Joe added 13 - seven over the final 36-plus minutes.

After Jimmy Whitt knocked down a jumper in the lane to put the Razorbacks up 49-46 with 7:14 to play, Kentucky answered with a 15-0 run to seize control. Nick Richards scored a team-high 17 points for UK.

Arkansas made things a little interesting in the final 30 seconds with a late push, aided by a Flagrant 1 foul on Quickley with Kentucky up by nine. The Razorbacks cut their deficit to 69-64, but the Wildcats sealed the game at the line.

We'll have much more from today's game a little bit later on WholeHogSports.com.

Mason Jones, the Razorbacks' leading scorer, has fouled out after scoring 19 points on 5 of 15 from the floor. He is the lone Arkansas player in double figures. Desi Sills has also fouled out.

Tyrese Maxey has a team-high seven points in the second half for Kentucky, and Nick Richards has six. Immanuel Quickley is one point shy of a double-double.

Ashton Hagans will be at the line when play resumes.

Nick Richards leads the Wildcats with 14 points while Ashton Hagans and Tyrese Maxey each have 11. Immanuel Quickley has nine, too.

Quickley just buried a 3 from the left corner to push the UK lead to 10. That might do it for Arkansas. The Wildcats' zone has given it fits since the eight-minute mark.

Things have gotten incredibly interesting in Bud Walton Arena since the last media timeout. First of all, the Razorbacks have stormed back to take a lead. Jalen Harris hit a huge 3 during the comeback, and Reggie Chaney made a pair of really terrific defensive plays.

Also, John Calipari received two technical fouls and was tossed from the game after Arkansas tied things up at 44. Mason Jones hit three free throws to give the Razorbacks their first lead since the 15:29 mark in the first half.

Jones has a game-high 19 points for the Razorbacks.

This is the loudest I have ever heard BWA. It was deafening when Calipari got T'd up then tossed. This place is chaotic.

The Wildcats keep leaving the door open for Arkansas by not dropping the dagger. Kentucky has not scored in the last 3:01.

Mason Jones finally cut into the Razorbacks' deficit with a driving layup in transition. He was fouled and will be at the line when play resumes. He has five of Arkansas' nine points since the break and a game-high 15 points on 5 of 12 from the floor.

Nick Richards has 10 points for Kentucky, and Ashton Hagans has nine.

Reggie Chaney added his first bucket of the day to get the scoring started for the Razorbacks in the second half, and Jimmy Whitt chipped in two free throws after attempting to tip in a Mason Jones miss from the left corner.

Arkansas, though, has to consistently cap defensive possessions with rebounds and start getting to loose balls. Kentucky has 14 second-chance points.

Tyrese Maxey and EJ Montgomery each have three fouls for the Wildcats. Jalen Harris got the start in the second half in place of Desi Sills, who picked up three prior to halftime.

Out of the timeout, Mason Jones fouled Wildcats guard Immanuel Quickley shooting a 3 on the right wing. He hit 2 of 3 free throws to send Kentucky into the break with a nine-point lead.

Jones leads all scorers at halftime with 10 points and a pair of rebounds. Isaiah Joe also has six points, but they came in the opening minutes of the game. He's been quiet since and also picked up two fouls in the final one-plus minute of the half.

Kentucky has been led by eight points from Nick Richards and seven from Ashton Hagans. Five other players have at least three points, too. The Wildcats are winning the rebounding battle 27-10 and 9-1 on the offensive end.

Arkansas' free throw shooting has been dreadful to this point. The Razorbacks are 3 of 8 at the line, and Jones and Adrio Bailey are each 1 of 3. Can't have that when next to nothing is coming easy offensively.

The Wildcats, entering the game the No. 1 team in the SEC in 3-point percentage, are backing that up today. They have hit 4 of 7 attempts from deep, and Hagans is 2 of 3 himself.

The Wildcats answered Mason Jones' 3 from the right wing with a bucket and a free throw from high-flying Keion Brooks. UK ball out of a timeout.

The Wildcats are getting some easy buckets offensively, and not much is coming to Arkansas that way. Kentucky is so sound defensively.

However, Mason Jones just hit a 3 off the bounce on the right wing to cut the Kentucky lead to four at the final media timeout of the first half. Underneath, Adrio Bailey was fouled and will shoot free throws.

The Razorbacks have to be cleaner in terms of turnovers (4) and better at the line. Arkansas is 3 of 6 to this point. Bailey, Desi Sills and Mason Jones have each split a pair. Have to convert those.

The Razorbacks went nearly three minutes without a bucket from the floor, but Desi Sills broke the lull with a 3 from the left corner.

Kentucky had ballooned its lead to seven points at 22-15 behind consecutive steals and scores. One came off a Jalen Harris miscue - his second of the game - and the other by Isaiah Joe as he attempted to take his defender off the bounce moving right.

Ashton Hagans still leads UK with seven points, and Nick Richards has six. Joe and Mason Jones have six each for the Razorbacks. Adrio Bailey and Desi Sills have four points apiece. Jimmy Whitt is scoreless - 0 of 3 shooting.

The Wildcats used a pair of jumpers and a layup from Nick Richards to take a lead prior to the under-12 media timeout. Richards has four points and a pair of rebounds. Immanuel Quickley has a game-high six rebounds - two more than Arkansas does as a team.

Desi Sills split a pair of free throws after the last stoppage in play, and Adrio Bailey did as well after attacking the rim. Tyrese Maxey has two fouls for Kentucky.

Jalen Harris turned the ball over a few moments ago for the first time in a little more than 100 minutes played.

Desi Sills will be at the line when play resumes after taking his defender to the rim off the bounce with the left hand and drawing a foul. Mason Jones added the Razorbacks' first score today on a layup.

For Kentucky, Ashton Hagans has six points on a pair of 3s. Arkansas began the game by sagging off him defensively, but he's made the Razorbacks pay twice now.

Tremendous atmosphere so far. Arkansas giving fans plenty of reason to get loud and stay loud.

This is the 10th consecutive game Eric Musselman will begin with this lineup. Over 275 possessions it has scored at a 1.03 point-per-possession clip and knocked down two-point attempts at a 57.4 percent rate. Defensively, the group has allowed .84 points per possession and limited opponents to 44.4 percent inside the arc.

Musselman noted in his press conference previewing the game that the Razorbacks will need their A-game to beat the Wildcats. Joe and Jones will need to produce at a higher level than they did against Vanderbilt, and the team's role players will be vital. It would really benefit Arkansas if it received a boost from on perimeter from players like Desi Sills and Jalen Harris.

It'll also be interesting to keep an eye on which Razorbacks player UK guard Ashton Hagans is assigned to. Hagans is one of the best defenders in the nation.

The Wildcats are a bit of a tough team to figure out. Through 16 games, they have losses to Evansville, Utah and South Carolina on their resume. All three teams fall outside of the KenPom top 100. But Kentucky also has prominent wins over Michigan State, Ohio State and Louisville.

Offensively, Calipari's team is leading the SEC in 3-point shooting, which is a bit of a surprise. Quickley, who has come off the bench the last six games, is shooting 14 of 21 from 3-point range in league play. No other Wildcats player has hit more than four 3s, though.

Defensively, Kentucky holds the top efficiency mark in the conference, allowing 95.4 points per 100 possessions. But, it is next to last in the SEC in forcing turnovers. On the flip side, Arkansas has a league-low offensive turnover rate of 11.9 percent.