Musselman a big fan of Calipari 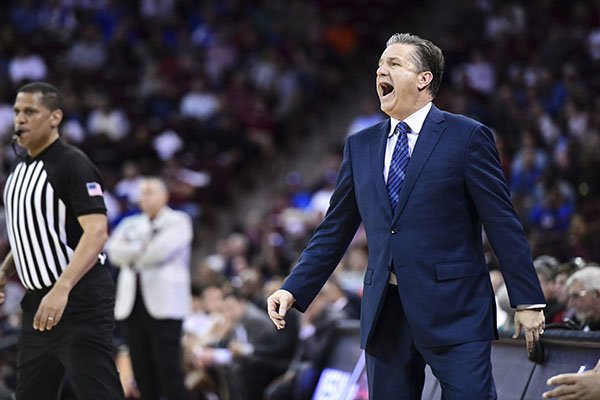 FAYETTEVILLE -- University of Arkansas Coach Eric Musselman naturally won't be rooting for Kentucky today in Walton Arena, but he is a big fan of Wildcats Coach John Calipari.

Musselman was an NBA assistant with the Memphis Grizzlies during the 2004-05 and 2005-06 seasons for Mike Fratello when he first got to know Calipari, who was the University of Memphis coach at the time.

"Coach Fratello and Coach Cal had a lot of late-night dinners with large groups of people," Musselman said. "I went to a lot of those. They were colorful."

Musselman said that when he took a break from coaching for three seasons from 2008-10, he used to attend coaching clinics in Memphis that Calipari put on with Larry Brown, the only coach to win NCAA and NBA titles with Kansas and Detroit.

Calipari and Musselman also spent a lot of time together when they coached international teams in 2011 and 2012.

"I was coaching the Dominican Republic team, then he ended up coaching it and I went and coached the Venezuelan team," Musselman said. "So we got to [be together] a lot because in those competitions you stay in the same hotel, you eat in the same area.

"I think he's such an incredible X's and O's coach, and he's such an important part of college basketball because he's a colorful personality who's a great coach, but also somebody that does a great job of pulling the coaching community together."

Calipari said at SEC media days and then again on the first coaches teleconference this season that he made it a point to praise Musselman's hiring when he talked to Dallas Cowboys owner Jerry Jones -- a former Arkansas football player and major UA booster.

"I'm so happy for Coach Muss at Arkansas," Calipari said on the teleconference. "I saw Jerry Jones in the box when Arkansas played up here, and I said, 'You guys have no idea what kind of coach you just got. This guy is as good as it gets.' "

Arkansas guard Mason Jones -- who is averaging a team-high 18.1 points -- had his two lowest-scoring back-to-back games this season with 13 points at Ole Miss and one point against Vanderbilt, but the 6-5 junior also had the top two assist games in his two seasons as a Razorback.

Jones had a career-high nine assists in Arkansas' 76-72 victory over the Rebels, then had eight when they beat the Commodores 75-55. Before the Ole Miss game, Jones' high for assists was seven against Indiana last season in a 73-72 victory.

"Mason knows that teams are going to try to lock in on him, and he's a really unselfish player," Arkansas senior guard Jimmy Whitt said. "He's not going to force [shots]. In the flow of the game, if it comes to him, it comes to him. But nights like [against Vanderbilt] and against Ole Miss, he's going to affect a game no matter if it's scoring or not.

"I think that's what great players do. They find a way to affect the game if their scoring isn't going well."

Jones is averaging a team-high 3.6 assists.

Sophomore guard Immanuel Quickley, who plays off the bench, is averaging 19.3 points in SEC games and 13.7 on the season.

"Quickley has really shot the ball a lot better of late," Musselman said. "I mean, he's on a tear shooting the ball, playing with a lot of confidence."

"Hagans is a high-volume free-throw attempt player," Musselman said. "He's really quick, he runs the show, and he's the heartbeat of their team."

Today will be the first time Eric Musselman has faced Kentucky as a head coach, but he was an LSU assistant during the 2014-15 season when the No. 1 Wildcats beat the Tigers 71-69 at the Maravich Assembly Center.

"Now, the buzz when you walk into the building, certainly at LSU that was our best crowd," Musselman said. "It was a great game.

"I remember the whole game vividly. I can tell you every possession. It was my scout that night."

Musselman said there also will be a buzz at Walton Arena today.

"I haven't been at Arkansas when we've played Kentucky, but I know there's going to be a buzz just as my phone every 10 seconds buzzes with people asking for tickets," he said. "People I haven't heard from in a long time.

"I've got a group of buddies I grew up playing with at La Jolla Rec in San Diego. They're flying in. So there's going to be a lot of that. Our players are going to have more family members at the game."

Musselman said he believes Arkansas' coaches and players will prepare for Kentucky as they do every opponent.

"I'm not going to coach any different against Vanderbilt or against Kentucky," he said. "You prepare the same way, then your level of play shouldn't fluctuate like a yo-yo, either.

"I mean, you should be ready to play every night as a player, and as a coaching staff you should have great preparation. We've got a game after the Kentucky game, too."

Arkansas had seven turnovers to Vanderbilt's 16 in Wednesday night's game to raise the Razorbacks' SEC-leading turnover margin to +5.4.

The Razorbacks are averaging 12.2 turnovers, but just 8.3 in four SEC games for a +7.2 margin in conference play.

It's a trend Arkansas Coach Eric Musselman said needs to continue against Kentucky.

"Because of the opposition's ability to outrebound us, taking care of the ball is vital," Musselman said. "We can't turn the ball over a lot against Kentucky. It's disastrous when you do that."

The Wildcats are a -3.0 in turnover margin in SEC games. They're averaging 13.5 turnovers to their opponents' 10.5.