Step up in rank: Wildcats are Hogs’ first Top 25 foe 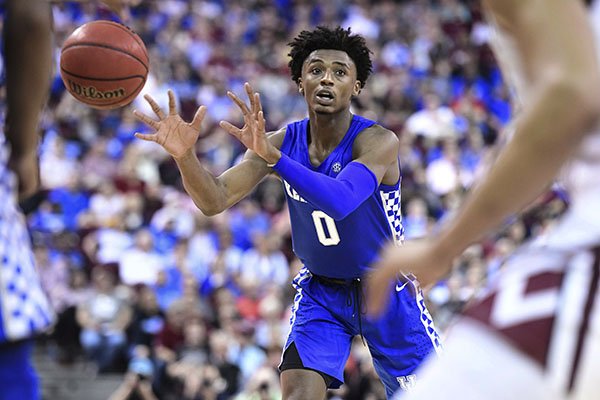 FAYETTEVILLE -- University of Arkansas Coach Eric Musselman isn't short on concerns when it comes to playing the No. 10 Kentucky Wildcats today at Walton Arena.

"That's a lot of concerns."

"Arkansas plays really hard, they play rough," Kentucky Coach John Calipari told members of the media in Lexington, Ky. "They're not big, but it doesn't seem to hurt them on either end of the court.

"They have specific roles of what guys are going to do, what kind of shots they're going to take, and they do it."

The Razorbacks have lost seven consecutive games to Kentucky -- including 70-66 at Rupp Arena last season -- since they swept the Wildcats with two overtime victories during the 2013-14 season.

Kentucky has been ranked as high as No. 1 in The Associated Press poll and as low as No. 19 in a season that includes victories over Michigan State and Louisville, but also losses to Evansville, Utah and South Carolina.

The Gamecocks overcame a 14-point deficit in the second half to beat the Wildcats 81-78 on Wednesday night at Colonial Life Arena in Columbia, S.C., when freshman Jermaine Couisnard hit a three-point basket at the buzzer.

"We know they're going to come in fired up because they don't want to drop two in a row," said Arkansas senior guard Jimmy Whitt, who scored a career-high 30 points Wednesday night when the Razorbacks beat Vanderbilt 75-55. "We have to just prepare for a dogfight, which we know it's going to be."

"Certainly with the teams that we've had after a loss, there's a heightened awareness of things that we didn't do well and need to improve on," Musselman said. "Many times losses grab the attention of your team more than a win.

"Sometimes when you win, you take for granted some of the little things. You look at Coach Cal's record, he's pretty good after a loss, I can tell you that."

"We lost two in Vegas ... and we came back, had a couple good days of practice and beat Louisville, who's a good team. I think that kind of shows how tough we are, and this is just another opportunity for us to kind of take it, mourn for 24 hours ... and then get back after it."

Arkansas has road victories at Georgia Tech, Indiana and Ole Miss, but Kentucky will be the first ranked team the Razorbacks have played this season.

"The only way that we are going to be able to play and compete with Kentucky is if we play our 'A' game. We can't bring a 'B+' game and expect to compete. We have to bring our 'A+' game to compete with this team. I truly believe that."

Musselman was asked if an "A+" game means getting plenty of scoring from junior guard Mason Jones and sophomore guard Isaiah Joe.

Jones is averaging 18.1 points per game and Joe 17.8, but they combined for 13 against Vanderbilt. Jones shot 0 of 7 from the field and 1 of 2 on free throws for one point -- his lowest-scoring game in two seasons at Arkansas -- and Joe scored 12 points.

Whitt and Chaney -- who matched his career high with 14 points -- and sophomore guard Desi Sills with 13 points picked up the scoring slack.

"We've just got to score," Musselman said. "Anytime a defense focuses on something, it opens something up for somebody else. And then it's up to us to not force the issue and to try to figure out what wrinkles during the game we can have to possibly get somebody more shots."

Whitt hit 14 of 24 shots against Vanderbilt.

"I didn't go into the game thinking Jimmy was going to take 20-plus shots," Musselman said. "That was not anything on our play script.

"But he found open gaps against their zone. They played a little bit more zone than we thought, and they had a big guy on him and he was able to use his quickness.

"Sometimes you don't know what the flow of the game is going to be until you are kind of in it. But it would be awesome if Mason and Isaiah both played great together and shot the heck out of the three."

Arkansas has started four guards all season with Jones, Joe, Whitt and Sills joined by 6-6 senior Adrio Bailey, and at times the Razorbacks have gone with a five-guard lineup with junior Jalen Harris added to the mix.

The 6-8 Chaney off the bench will be the biggest Razorback to go against Kentucky 6-11 junior Nick Richards, 6-10 sophomore EJ Montgomery and the 6-9 Sestina.

"If our traditional lineup can't play [effectively], then we've got to go with five guards because that's what we've had to do against some teams," Musselman said. "[Calipari's] got five guards he can throw out there, too. He can throw seven out there at us.

"Whatever we throw out there, I think they're going to have something to counter because they're a little bit different than other teams that might not have the luxury of depth."

Arkansas men vs. No. 10 Kentucky

CHALK TALK Kentucky has won seven consecutive games against Arkansas since the Razorbacks swept two games during the 2013-14 season when they beat the Wildcats 87-85 in overtime at Walton Arena and 71-67 in overtime at Rupp Arena ... Isaiah Joe led Arkansas with 19 points in a 70-66 loss at Kentucky last season and Desi Sills scored 15. The Wildcats rallied from a 39-28 halftime deficit ... Joe scored all 12 of his points against Vanderbilt on Wednesday night in the second half when the Razorbacks beat the Commodores 75-55 ... Of Joe's 121 points in the past six games, 98 have been in the second half ... Razorbacks guard Mason Jones has a team-high 54 assists, including 17 in the past two games with 9 at Ole Miss and 8 against Vanderbilt ... Jones also leads Arkansas with 29 steals ... Arkansas leads the nation in three-point defense (22.8%) and leads the SEC in steals (9.1 per game) and turnovers forced (17.6) ... The Razorbacks are 10-0 at Walton Arena this season and have won 12 in a row going back to last season. Their last home loss was 87-80 to Texas A&M on Feb. 23 ... Kentucky is 1-1 on the road with a 78-69 victory at Georgia and 81-78 loss at South Carolina.