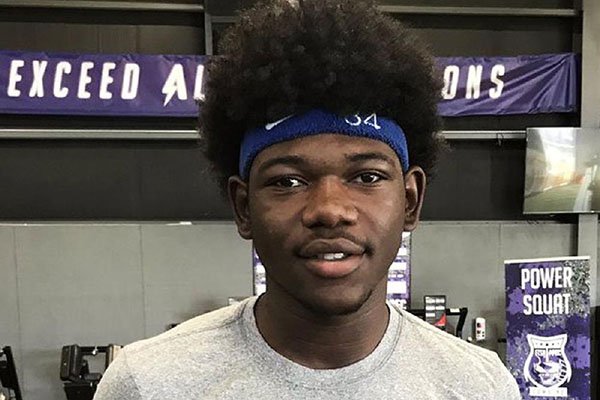 FAYETTEVILLE — Allen Horace, a tight end who was previously committed to Arkansas, made an official visit to Fayetteville this weekend and things appear to have gone well.

Horace (6-5, 242 pounds) of Crockett, Texas, committed to Arkansas over scholarship offers from Nebraska, Baylor, Oklahoma State and Texas Tech during his visit in April, but reopened his recruiting following the firing of former coach Chad Morris in November.

His second official visit to Arkansas was a hit.

“It went a lot smoother than last time. Everything was more well put together,” Horace said. “The coaches were nice. I like Coach (Sam) Pittman. He’s a pretty cool guy. Coach (Jon) Cooper is a nice guy, he’s pretty cool.”

The Hogs only have two scholarship tight ends on campus.

“Yeah, they told me that, I was amazed,” said Horace, who was accompanied by his brother, Cole. “For me, that’s a good thing. I want to come make an impact early.”

A multi-sport athlete, Horace is also a good basketball player and averaged 16 points, 12.5 rebounds and 2.4 blocks as a junior.

His college decsion will be made after his trips.

“I’ll decide after I take my other visits,” he said “You know, you don’t know what the best place is until you go and check out other places.”

Freshman receiver Trey Knox hosted Horace. He and the other recruits took in the Arkansas-Kentucky basketball game.

“It was nutty, it was different,” Horace said of the atmosphere.

He believes his 48 hours in Fayetteville allowed him to feel comfortable with the coaches.

“Definitely, they showed a lot of character,” he said.

A school’s coaching staff will impact his decision.

“I want coaches who are some real people,” Horace said.