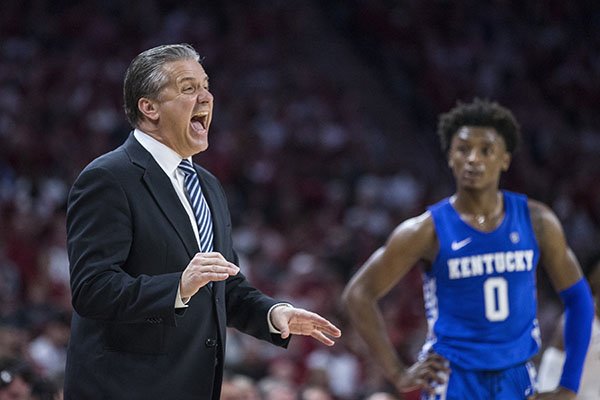 Kentucky coach John Calipari yells while guard Ashton Hagans (0) looks on during a game against Arkansas on Saturday, Jan. 18, 2020, in Fayetteville.

FAYETTEVILLE — FAYETTEVILLE — More than two hours before the doors opened, the students were four wide and more than 100 yards deep.

For the first time in too long, the students and Razorback Nation believed their heroes had a legitimate chance to beat Kentucky, which is the goal of every SEC basketball school.

The University of Arkansas men gave it their all, but it wasn’t enough against the taller Kentucky Wildcats, who got 18 points off the bench and dominated the boards.

The crowd stayed until there was just 1:39 to play, when most hit the exits with the Wildcats leading by 10 and on their way to a 73-66 victory.

He’s a great recruiter, noted strategist and excellent motivator. But on Saturday, he missed seeing his team outscore the Razorbacks 29-19 down the stretch for its eighth consecutive victory over the UA.

Arkansas had trailed for 24:35, but the Razorbacks found their stroke in the second half at the free-throw line.

The Razorbacks’ rally was mostly because of making 8 of 11 free throws as neither team could have bought a basket at an after-Christmas sale. At that point, Kentucky had been called for 12 fouls and the Razorbacks for four.

He was so vociferous that he received a technical foul to send the Hogs to the line for two more free throws.

But Coach Cal objected louder and with greater indignation, and he was hit with a second technical and sent to the locker room to think about his behavior.

No doubt he has great remorse, or at least he’ll say he does.

What he missed was Mason Jones hitting three of four free throws to give the Razorbacks a 47-44 lead, their first advantage since the opening five minutes.

What he also missed was his team’s first free throw of the half with 6:53 to play, then the next 15 free throws as the fouls evened out.

With 4:09 left, the visitors were in control 59-49 as the Razorbacks were mired in their fourth scoring drought of the game, most of them caused by Kentucky’s great defense.

The Razorbacks would mount another charge to pull within 71-66 with 13 seconds to play, but the Wildcats made two more free throws to ice the game.

The greatly anticipated shootout morphed into a defensive battle that sprawled from sideline to sideline.

The biggest difference was inside, where the Hogs have little length. The Wildcats scored 32 points in the paint, with 14 coming off of offensive rebounds. They outrebounded the Razorbacks 47-29.

For the record, Kentucky shot 13 more free free throws after Coach Cal was ejected. The loud crowd knew some make-up calls were coming.

In the last 8:49, the Razorbacks were called for 11 fouls and the Wildcats six.

In the opening half, the Hogs didn’t do a lot to inspire the crowd.

They missed 12 of their 15 two-point shots; were outrebounded 27-10; missed five free throws, including the front end of two one-and-ones; and in the last 20 seconds, they fouled four times.

They had one offensive rebound, but that was because the game plan was to get back on defense and deny the Wildcats transition points.

Again, a lot of the Razorbacks’ problems were caused by Kentucky’s in-your-face defense.

In the end, the Hogs never quit. They fought hard and came up short.