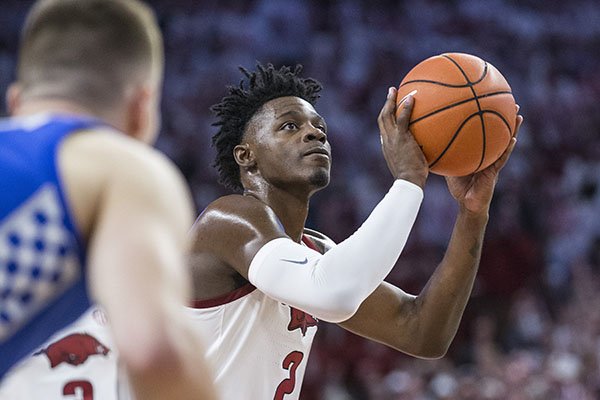 Arkansas forward Adrio Bailey (2) shoots a free throw during a game against Kentucky on Saturday, Jan. 18, 2020, in Fayetteville.

FAYETTEVILLE -- In a battle of two of the top three free-throw shooting teams in the SEC, No. 10 Kentucky outdid the University of Arkansas during the Wildcats' 73-66 victory at Walton Arena on Saturday.

Arkansas, which entered as the third-best free-throw shooting team in the conference at 75.2%, had one of its worst games by going 20 of 30 for 66.7%.

The Razorbacks were a mess in the first half, going 3 of 8 from the foul line, including 1 of 3 from guard Mason Jones, who entered as the SEC's second-best free-throw shooter (91.2%) behind Kentucky's Immanuel Quickley (93.3%).

Adrio Bailey and Jones missed the front end of one-and-one opportunities late in the first half. Bailey finished 1 of 6, while Jones went 8 of 12.

"I missed four free throws, Adrio missed five free throws," Jones said. "We've been a good free-throw team all year. We just, we blew it. It was on us.

"If you look at it, three and five, that's eight points. We lost by seven. Me being one of the best free-throw shooters in the SEC, that's unacceptable. Adrio going 1 for 6 is unacceptable, but we've just got to live and learn."

"I thought our free-throw shooting really hurt us," he said. "I can't really answer why we missed foul shots. But we left points on the board, and we missed some front ends of one and ones. And that can't happen."

Kentucky Coach John Calipari got the heave-ho with 8:19 remaining in the game after picking up consecutive technical fouls at midcourt after an offensive foul call on EJ Montgomery with the score tied 44-44.

Patrick Evans whistled the first technical foul on Calipari. After that, Brian Shey tried to usher the Kentucky coach back to his coaching box. A few seconds after that, when Calipari would not back away, Shey was getting ready to blow his whistle and signal the technical when Evans came back and made the "T" signal, which Shey repeated a moment later.

Wildcats assistant Kenny Payne coached the rest of the way. He gave assistant coach Tony Barbee credit for going with a zone defense after that, and deferred credit to Calipari for having the team prepared for the adversity.

Asked what Calipari said to him, Payne said: "Nothing on the way out. [He] probably wanted to choke a couple referees. On the way in, he hugged me and said, 'I'm proud of you.' I just told him, 'This is what you've built.' "

Calipari did not talk to the media after the game.

Kentucky won the rebounding battle 47-29, an 18-board margin that was Arkansas' second-worst in SEC play behind a 29-board differential in a 79-77 loss at LSU.

"I thought it really affected Jimmy in the first half," Musselman said.

Whitt went 0 for 4 in the first half with no points, and finished 3-of-9 shooting for 14 points.

"Just watching the film of him, he's an excellent mid-range player at a time when guys aren't putting a premium on mid-range," Payne said. "He's probably one of the best mid-range players in the country. But by putting EJ and our four men on him, it caused him problems, their athleticism. So that was a good way that we defended him."

Said Whitt: "I missed shots I take every day. It happens in the game of basketball. Sometimes you're hot and you have the hot hand, and sometimes you have nights like tonight.

"I don't think this was one of our best efficiency nights. Guys, including myself, missing shots that we normally make, but there's going to be games like that where the ball is just not falling in the hole."

Kentucky players talked about how loud the sold-out crowd at Walton Arena got.

Said guard Tyrese Maxey: "It was definitely pretty loud at times. Especially when they went on that little run and when Coach Cal had his ... technical fouls. I don't know how many he had. It was super loud then. But it was just crazy."

The officiating trio of Anthony Jordan, Patrick Evans and Brian Shey let the teams play in the early going. The first foul called on Arkansas came on a Desi Sills infraction at the 10:28 mark of the first half. The Wildcats had three fouls at that point.

Kentucky was whistled for the first seven fouls of the second half before Jordan called Arkansas guard Mason Jones for an offensive foul for using his arm to swat away a defender at the 14:26 mark.

Sophomore guard Immanuel Quickley made his first start in six games, since a 69-66 loss to Utah on Dec. 18. Quickley replaced forward Keion Brooks to help the Wildcats match backcourts better against the Razorbacks.

Kentucky got a little separation in the first half when a couple of breakaways led to goal-tending calls against the Razorbacks.

Reggie Chaney was whistled for the first infraction after Jimmy Whitt blocked an Ashton Hagans layup on the break. Maxey grabbed the miss, and Chaney blocked his putback try on the way down.

Moments later, after Maxey made a clean steal on a drive by Isaiah Joe, Nate Sestina was given credit for a basket that was not as clear cut of a goal-tending call.

Arkansas Athletic Director Hunter Yurachek took a subtle shot on social media at ESPN analyst Dick Vitale on Saturday morning after Vitale had tweeted to a fan that Walton Arena "will be electric but that is going to happen due to Kentucky basketball coming to Fayetteville baby. [Big Blue Nation] gets everyone fired up."

Yurachek wrote Walton Arena would be sold out like every Saturday (SEC) game "because Razorback fans are the best not because UK is in town," and he tagged Vitale in the post.

A little before tipoff, Vitale responded on Twitter, "hey I said Kentucky brings a frenzy everywhere they play but Razorbacks don't need Cats to have a fantastic environment. This place is ELECTRIC."

Kentucky Coach John Calipari improved to 13-6 vs. Arkansas at three stops. Calipari had a 1-2 mark against Arkansas while at Memphis, a 2-0 record while at Massachusetts, and he's now 10-4 at UK, including eight consecutive victories.

• Football Coach Sam Pittman and his entire 10-man coaching staff received a big ovation when they called the Hogs and were introduced on the court with 2:11 left in the first half.

• Arkansas debuted new uniforms that featured a Hog logo in the middle of the chest, with the number below that.