UA gymnastics falls at No. 1 Oklahoma 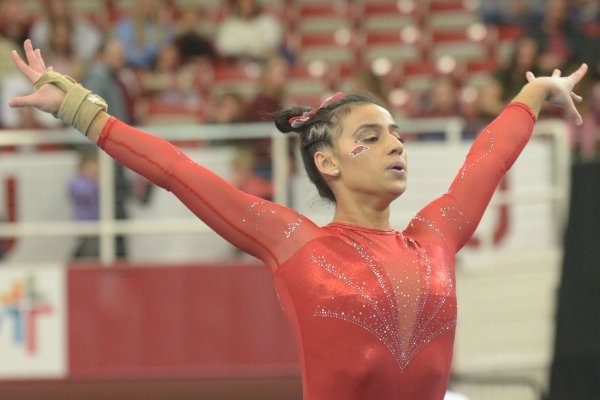 Arkansas' Sophia Carter competes in the floor Saturday, Jan. 5, 2019, during the Razorbacks' meet with No. 2 Oklahoma in Barnhill Arena in Fayetteville.

Senior Maggie Nichols scored a perfect 10 on the vault to kick off a nearly flawless performance and lead the No. 1 Oklahoma gymnastics team to a 198.175 to 196.55 defeat of the University of Arkansas on Monday afternoon.

Nichols posted her second 10 on the vault this season en route to a sparkling 39.9, the nation’s top all-around score this year. She won all four event titles and edged teammate Anastasia Webb (39.525) for the all-around title. Nichols scored 9.975 on the balance beam and floor exercise and her low score was a 9.95 on the uneven bars.

The Sooners (6-0) extended their winning streak to 14 consecutive meets over the Razorbacks (0-3), who have faced the top three teams in the nation in their first three meets under first-year Coach Jordyn Wieber.

Arkansas freshman Bailey Lovett placed second on the balance beam with a 9.9, while Razorback junior Sophia Carter tied for third on the floor exercise with a 9.9.

Arkansas sophomore Kennedy Hambrick came in third in the all-around with a 39.325, that featured a 9.875 on the bars and 9.85s on the vault and floor exercise. Arkansas senior Jessica Yamzon placed fourth in the all-around (39.2), followed by Razorback freshman Kiara Gianfagna (39.075).