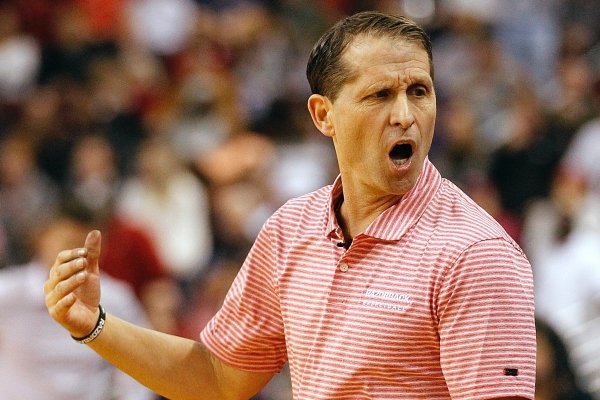 Arkansas head coach Eric Musselman reacts after a call during the second half of the Razorbacks' 72-68 win over Valparaiso on Saturday, Dec. 21, 2019, at Simmons Bank Arena in North Little Rock.

If someone had told you Arkansas would have two players score 20 points and get 17 points from its bench, you would like the Razorbacks' chances at home or on the road.

That is what happened Wednesday night against Mississippi State, but it wasn't nearly enough.

Bulldogs sophomore forward Reggie Perry, a former Razorbacks commitment, was a constant in the game and finished with a 26-point, 13-rebound double-double in Mississippi State's third consecutive win on its home floor. He was both physical on the interior and the beneficiary of a few iffy whistles and hit 14 of 15 free throws.

In the win, Perry, the lone player in the SEC averaging a double-double entering the week, became the first Mississippi State player to finish with 20-plus points and 10-plus rebounds in three consecutive games in the last 20 seasons. He added 14 points, eight rebounds and two blocks in the Bulldogs' 47-point second half.

The bottom line is Mississippi State won the game at the free throw line, and Isaiah Joe hurt the Razorbacks for the second consecutive game.

Joe, who got exposed defensively a couple of times, tied a season low with five points and hit just 2 of 13 shots, including 1 of 8 beyond the arc. He also had three turnovers, his most in a game since the loss at Western Kentucky on Dec. 7.

Similarly to the Kentucky game, Joe knocked down a 3 in the early going then disappeared. He buried a triple from the top of the key just more than two minutes in to get Arkansas on the board. His second and final score came with 10:31 to play - a span of 25 minutes, 14 seconds on the floor between scores.

If you remember, he was also held scoreless against Kentucky for a 31-minute, 21-second stretch. And according to KenPom analytics, he finished with a personal offensive rating of 43, the lowest mark in his 52-game career.

The loss wasn't all on Joe. Desi Sills did not have a great night either. He, too, was hardly visible in his 19 minutes. He scored a season-low two points on 1 of 4 from the floor. His lone bucket came with 1:12 remaining.

If there is a positive to take from the game it is the play of Arkansas' bench, which has been hit or miss for much of this season. Jeantal Cylla played his best ball of the year in his most meaningful minutes, adding five points. He knocked down both of his shots. His driving layup and finish with the left hand was his first bucket since the Nov. 22 win over South Dakota.

He also grabbed two defensive boards and recorded his first assist of the season after 15 games played.

Reggie Chaney performed well again, contributing eight points on 4 of 5 from the floor to go with two rebounds, one block and one steal. Dating back to the Vanderbilt game, Chaney has gotten 12 of 13 shots to fall. He's playing with great confidence, and it was evident in a couple of moves he made around the rim. His minutes should increase.

In terms of defensive efficiency, Wednesday was Arkansas' second-worst showing of the season. The Razorbacks allowed Mississippi State to score at a rate of 111.6 points per 100 possessions. Arkansas is 1-4 this season when its defensive rating rises above 100.0.

Plain and simple, the Razorbacks won't win many SEC games shooting 4 of 20 from 3-point range. Eric Musselman, who dropped back-to-back games as a college head coach for just the fifth time, said the magic number in terms of 3s Arkansas needs to hit in a game, particularly on the road, is 12.

The Razorbacks were nowhere close to that number in Starkville. Jones did hit two, but it probably isn't a good sign when Cylla connects on as many as Joe. Arkansas now ranks ninth in the SEC in 3-point shooting at 30.7 percent. For the season, it is hitting 30.7 percent as well, which ranks 279th nationally.

Adversity has now hit this Razorbacks team, and the schedule doesn't get easier.

Arkansas welcomes in TCU on Saturday as part of the Big 12/SEC Challenge, and the Horned Frogs are fresh off a win over Texas Tech on Tuesday. Jamie Dixon's club is top 40 nationally in defensive efficiency, so the Razorbacks will have their work cut out for themselves.

Arkansas needs to take advantage of its next two home games before hitting the road for three of four to begin February.