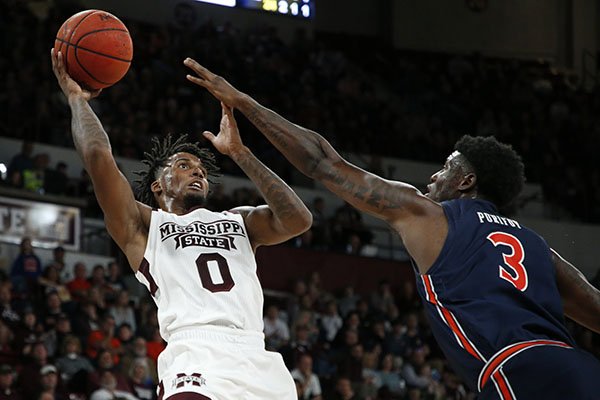 STARKVILLE, Miss. -- Mississippi State almost was as dominating on the boards against LSU as the Tigers were against the University of Arkansas men's basketball team.

After LSU outrebounded the Razorbacks 53-24 and hung on for a 79-77 victory at home Jan. 8, Mississippi State came into the Maravich Assembly Center for the next game.

"I got sick to my stomach when I looked at the Mississippi State-LSU box score, because Mississippi State annihilated LSU on the backboards in the rebounding game, and we all know that we were minus-29 on the glass at LSU," Razorbacks Coach Eric Musselman said Monday night on his radio show. "Things are going to have to change rebounding-wise for us, and they're going to have to change really quick beginning on Wednesday night in Starkville."

It's certainly big for the Bulldogs, who have a plus-8.3 rebounding margin to lead the SEC and rank 13th nationally.

"Their strength is our weakness," Musselman said of the Bulldogs.

Mississippi State is particularly active on the offensive boards. The Bulldogs are rebounding 41.4% of their misses, which leads the nation according to the analytics website KenPom.com.

Mississippi State 6-10 sophomore Reggie Perry is averaging 10.1 rebounds to lead the SEC. Robert Woodard, a 6-7 sophomore, is averaging 7.6 rebounds to rank seventh, and 6-11 junior Abdul Ado is at 6.9 to rank 10th.

"Perry isn't ultra quick, but he has good instincts to the ball," said Joe Kleine, the former Arkansas All-American center and 15-year NBA veteran who has called two Mississippi State games this season as an SEC Network color analyst. "He anticipates rebounds really well. He's not a guy that just rebounds in his space. He can go get it."

"He's a bruiser, too, man. He carves out space in there, and he holds his ground. Woodard is a smaller version of Perry on the boards. He's athletic. Ado is long, and he does a nice job, too. They have three really, really, really good rebounders with those guys."

The Razorbacks won 76-72 at Ole Miss despite being outrebounded 40-28, then beat Vanderbilt on the boards 38-26 in a 75-55 victory over the Commodores, who have lost 22 consecutive SEC regular-season games.

Immanuel Quickley, a 6-3 sophomore guard, led the Wildcats with 10 rebounds.

"I think when you put so much focus on trying to keep the big guys off the boards, something has to open up," Arkansas 6-3 senior guard Jimmy Whitt said. "Quickley did a great job of just being able to fly in there and get rebounds."

"We've got to rebound at the guard spot, and we can't just rely on one guy, because we don't have that one guy who's a dominant rebounder," Musselman said. "So we can't have three guards on the other team basically outrebound our whole team. That's what happened against Kentucky."

Kentucky 6-3 guards Ashton Hagans and Tyrese Maxey each had six rebounds, so along with Quickley the trio combined for 22 rebounds -- just seven fewer than Arkansas.

Jones, who is averaging a team-high 6.1 rebounds, had six rebounds against the Wildcats. Bailey, Joe and Whitt had five rebounds each.

Musselman said Kentucky was the second game the Razorbacks lost -- along with LSU -- because the rebounding margin was so vast.

"We lost at LSU because we didn't rebound enough," Musselman said. "We didn't close the gap just a little bit. If you lose that game by 20 on the boards, you still win the game."

The Razorbacks have been outrebounded in 13 of 17 games, but going into SEC play their margin was only minus-2.4.

Musselman saw first-hand the athleticism in the SEC when he was an assistant at LSU during the 2014-15 season, and he got a reminder at the coaches' meetings when he talked to Georgia Coach Tom Crean, who previously was at Marquette and Indiana.

"He and I have known each other for a long time," Musselman said. "I asked him what's the difference between the SEC -- in his opinion-- and the Big Ten and other places that he's coached. He said, 'You're going to be amazed at how active the rebounders are in this league.' I was already in the league, so I knew. But his statement rings true."

Arkansas has won games by hitting 130 three-point baskets compared to 69 for its opponents, and having a plus-5.4 turnover margin that leads the SEC and ranks sixth nationally.

"It's a match-up nightmare," Howland said of facing Arkansas' guard-heavy lineup. "There's a different guy pushing it every time on made and missed shots.

"They take 58 shots a game, and if you look at their pace of play, they're at 70 possessions a game. If they don't have something -- if you stop the transition game -- they're going to be very patient.

"They're not a team that's coming down and jacking up shots if they aren't good shots early in a possession. They're going to make you play defense for 15, 20 or 25 seconds at a time."

Musselman had hoped 7-3 sophomore Connor Vanover would be immediately eligible this season after transferring from California, but the NCAA denied his waiver request that was based on the Little Rock native moving closer to home to be near his ailing grandmother and the fact that his coach with the Bears, Wyking Jones, was fired.

"Obviously, we were hopeful, for good reason, that Connor was going to be eligible," Musselman said. "That wasn't the case. So that kind of changed who we were.

"We're playing hard. We just have a deficiency as far as size."