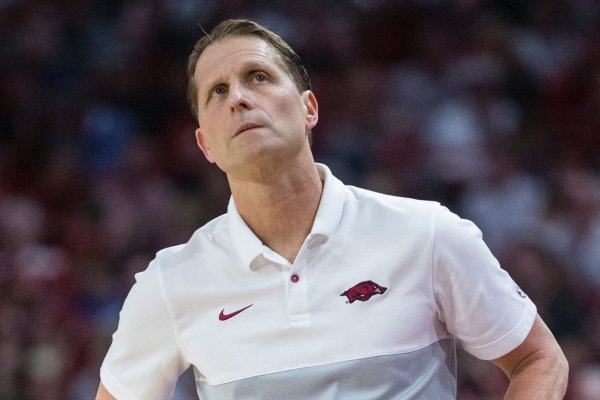 FAYETTEVILLE -- University of Arkansas Coach Eric Musselman has been doing some deep thinking about lineup combinations to better compete against taller lineups.

The contemplation follows him home into quiet moments with his dog, Swish.

On Monday, Musselman was asked whether he'd consider starting 6-8 forward Reggie Chaney tonight against a Mississippi State team that leads the SEC in rebounding margin (+8.3) and starts 6-11 Abdul Ado, 6-10 Reggie Perry and 6-7 Robert Woodard along with 6-4 Tyson Carter and 6-2 Nick Weatherspoon.

The Razorbacks' tallest starter is 6-6 Adrio Bailey, who has generally paired with the four-guard lineup of 6-5 Isaiah Joe, 6-5 Mason Jones, 6-3 Jimmy Whitt and 6-1 Desi Sills.

"I mean, in reality, I think of everything," Musselman said. "Do you start Reggie and go two bigs? Do you start [6-8] Ethan [Henderson] and just see what happens for two minutes? Do you start [Jalen Harris] because when 'J5' comes in, [he] pushes the ball and we get easier layups? I think about all those things.

"The best one to consult with is my dog, because he just sits there and licks my hand. Everything is cool with Swish. He's the guy I like to sit alone with and talk to about these type of things."

"Jones is leading them in everything," Howland said Tuesday. "He's an incredible player and a great story. You go back, and that guy was 275 pounds coming out of high school and nobody wanted him. He started losing weight, went to junior college for a year and ends up getting an offer from Arkansas.

"He's really, really a great story, and he does everything."

Mississippi State forward Reggie Perry, a former Razorback commitment, leads the SEC with 10.1 rebounds per game and, with 16.4 points per game, is the only player in the conference to average a double-double.

Perry combines with Tyson Carter (13.8 ppg), Nick Weatherspoon (13.3 ppg), Robert Woodard (11.6 ppg) and shot-blocking Abdul Ado -- who averages 6.9 rebounds and 1.9 blocked shots per game -- to give the Bulldogs one of the SEC's most explosive starting lineups.

Arkansas Coach Eric Musselman said you can throw out Mississippi State's 11-6 record because Weatherspoon was suspended for the first 10 games, reportedly due to academic misconduct.

"He can score the ball," Musselman said. "He hasn't been shooting the three well, but we know historically in his career, he's been able to make threes. He's a really good dribble-driver.

"Then obviously Perry is a phenomenal talent. Good inside, good outside. Ado, he causes us problems inside. Even their small forward [Woodard], I mean we're worried about him on the glass as well."

Eric Musselman's college teams traditionally have fared well after a loss, including a 2-0 mark this season after setbacks at Western Kentucky and at LSU.

The Razorbacks followed those losses -- in overtime and by two points, respectively -- with a 98-79 victory over Tulsa at Walton Arena and a 76-72 victory at Ole Miss.

Musselman's teams at Nevada and Arkansas are 17-1 in home games after a loss, 10-1 in road games and 2-2 on neutral floors.

The Wolfpack and Razorbacks have not lost three consecutive games under Musselman's leadership.

Guard Jalen Harris already has increased his count of made three-point shots from a year ago.

When Eric Musselman was an NBA head coach with Golden State and Sacramento, he visited UCLA practices when Ben Howland coached the Bruins.

Tonight Musselman and Howland, in his fifth season at Mississippi State, will face each other as head coaches for the first time.

"We have some mutual friends. As an opposing coach, I have tremendous respect for what he does."

Howland has a friendship with Musselman and his wife, Danyelle, and he knows of Bill Musselman, Eric's father.

"Eric's been a basketball guy since he was born," Howland said. "His dad was a very good coach. He's been around the game his whole life. He's been an NBA coach at multiple places.

"He obviously loves the game and is all about basketball, and I respect that a lot."

Howland has a 490-268 record in 24 seasons at Northern Arizona, Pittsburgh, UCLA and Mississippi State. He was 233-107 in 10 seasons at UCLA, including three consecutive Final Four appearances from 2006-08, but he was fired in 2013 when the Bruins failed to advance to the NCAA's Sweet 16 for the fifth consecutive year.

"You think about Ben winning like he has at UCLA, and in reality he's won more than anybody in recent times at UCLA," Musselman said. "And why he's not still there, I'll never know because he won a lot of games and took them far in the NCAA Tournament.

"Look at what he did at Pitt and NAU. He's a heck of a coach. He wins anywhere he goes."

The Razorbacks recognized Martin Luther King Day by having players read the civil rights leader's quotes in front of the team at practice and say what the words meant to them, including being there for each other and overcoming adversity.

"When you think about our society and all the impact [King] still has today, to our players it's really important," Eric Musselman said on his radio show. "Every year that I've been coaching, I open up the floor."

Musselman said it was "powerful" hearing the Razorbacks quote King.

"Basketball is why we have sellouts and all that, but these are college student-athletes, and so it really is about trying to educate them," Musselman said. "This holiday, it doesn't just mean, 'Hey, we're off work today because it's Martin Luther King Day.' I think you've got to dive into the historical aspect of it."

When the Razorbacks played Georgia Tech earlier this season in Atlanta, the team visited Ebenezer Baptist Church, where King was a pastor.