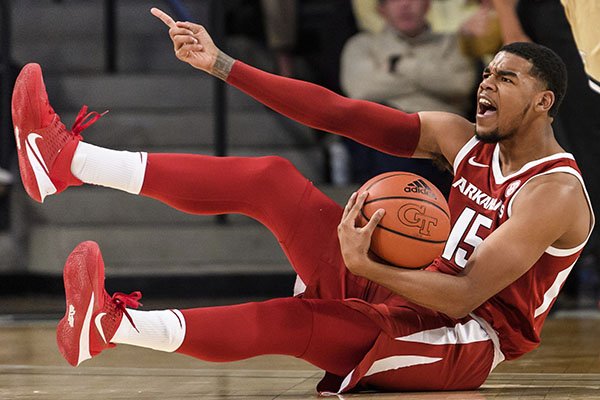 Arkansas guard Mason Jones (15) calls for a foul in the first half of an NCAA college basketball game against Georgia Tech Monday, Nov. 25, 2019, in Atlanta. (AP Photo/Danny Karnik)

STARKVILLE, Miss. -- The University of Arkansas men's basketball team has a losing streak.

Granted, it's just losses in back-to-back games, but that's a first for the Razorbacks this season.

Mississippi State beat the Razorbacks 77-70 on Wednesday night before an announced crowd of 6,337 at Humphrey Coliseum after Arkansas lost to Kentucky 73-66 on Saturday at Walton Arena in Fayetteville.

"When you lose a game to Kentucky, you've got to come back and win your next game, and we didn't do that," Razorbacks Coach Eric Musselman said. "You should always bounce back from a loss and play your best game after a loss, and we did not play our best game.

"We played one of our worst games of the year, and that's not how you should respond after a loss."

Reggie Perry, a 6-10 sophomore who committed to Arkansas before signing with Mississippi State, led the Bulldogs with 26 points, 13 rebounds, 3 assists and 2 blocked shots.

"We had a good plan for him, but he got to the free-throw line," said Arkansas junior guard Mason Jones, who had 20 points, 7 rebounds and 4 assists. "That's all that matters."

"He did a great job," Musselman said. "He did what good players are supposed to do -- make your foul shots. He's a big body, and he did a great job drawing free throws tonight."

It was Perry's 10th double-double this season.

"Reggie's just so strong and hard to match up with," Mississippi State Coach Ben Howland said. "We ask so much of him, and he delivers. He's just an incredible player."

Arkansas (14-4, 3-3 SEC) unexpectedly outscored the bigger Bulldogs 46-24 on points in the paint and was outscored only 11-8 in second-chance points, but Mississippi State made 27 of 31 free throws compared to 6 of 11 by the Razorbacks.

The Razorbacks came into the game forcing an SEC-best average of 17.5 turnovers per game, but Mississippi State had just 9 turnovers to 7 for Arkansas.

"The key for us was taking care of the basketball tonight," Howland said. "They force a lot turnovers and score off them."

Mississippi State finished with a 10-9 edge in points off turnovers.

"That was huge for us," Howland said.

"We wanted to turn them over, but they were so good with the ball," Jones said. "Weatherspoon did a great job controlling the game."

Arkansas pulled within 35-33 on Jones' three-pointer at the 17:32 mark, but couldn't draw any closer.

"If you had told me going into the game that we would outscore them 46-24 in points in the paint and only have seven turnovers, I would have said, 'All right! We're going to win by 10,' " Musselman said. "Not the case when you have six points to their 27 from the foul line.

"So we have to do a better job of defending without fouling."

The Bulldogs won their third consecutive game -- all at home -- after pounding Missouri 72-45 and Georgia 91-59 last week.

"That was a great win over a really good Arkansas team," Howland said. "That was a very important win. I thought it was our best win of the year.

"I mean, they're so difficult to match up with the way that those guards all play so unselfishly and together for them."

Razorbacks sophomore guard Isaiah Joe, who came into the game averaging 17.5 points per game, shot 2 of 13 from the field -- including 1 of 8 on three-pointers -- and finished with 5 points.

"Joe's a heck of a player," Howland said. "He actually missed a couple wide-open looks that he never misses. So I'm really thankful."

"Mississippi State is really talented," Musselman said. "They've got eight really good payers. In my mind, they've got eight starters on their roster. And I mean eight guys that could start on a lot of teams.

"We've got to play near flawless basketball, to be honest with you, to beat a team like that, especially on the road. We didn't do that tonight."

Musselman, in his first season as Arkansas' coach, hadn't lost two consecutive games since his final two at Nevada last season when San Diego State beat the Wolf Pack 65-58 in the Mountain West Tournament in Las Vegas and Florida beat them 71-60 in the NCAA Tournament in Des Moines, Iowa.

"We've got to get better in all facets offensively and defensively if we want to win in this league," Musselman said. "Because right now, the last two games, we haven't played well enough obviously to win. We've got to figure out a way to play better."

UP NEXT Arkansas will play TCU at 3 p.m. Saturday at Fayetteville in the Big 12/SEC Challenge.