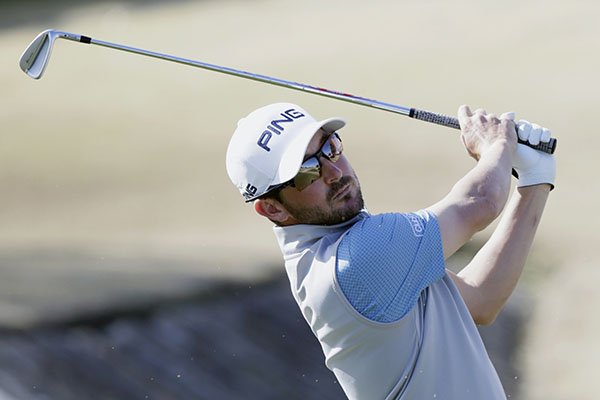 Andrew Landry follows through on the fourth tee during the final round of The American Express golf tournament on the Stadium Course at PGA West in La Quinta, Calif., Sunday, Jan. 19, 2020. (AP Photo/Alex Gallardo)

FAYETTEVILLE -- Pro golfers Andrew Landry and Gaby Lopez pulled off a feat last weekend that had not been done in more than three years.

Landry, a three-time All-American at the University of Arkansas, won his second PGA event, The American Express at PGA West in LaQuinta, Calif. He capped the victory with birdies on the difficult final two holes on the Stadium Course after his six-stroke lead had evaporated.

Lopez needed an extra day and seven playoff holes Monday to outlast Nasa Hataoka of Japan to win the season-opening Diamond Resorts Tournament of Champions by one shot at Lake Buena Vista, Fla.

Landry and Lopez are believed to be the first golfers from the same school to win on the PGA and LPGA tours on the same weekend since late in the 2016 season.

According to research by the PGA, former Arizona State golfers Pat Perez -- who won the Mayakoba Golf Classic -- and Carlota Ciganda -- who won the Lorena Ochoa Invitational -- completed the feat on Nov. 13, 2016.

"Just super proud of Gaby and Andrew," said Shauna Taylor, the UA women's golf coach. "That made for fun golf watching last weekend. They're both just great representatives of both of our programs. They're both proud pro Hogs for us."

By Charlie Kaijo In this June 2019 file photo, Gaby Lopez lines up her putt during the final round of the Walmart NWA Championship at the Pinnacle Country Club in Rogers.

Arkansas men's golf Coach Brad McMakin was the caddie last weekend for current Razorback Julian Perico -- who finished sixth at the Latin America Amateur Championship in Mayakoba, Mexico -- but he was keeping up with Landry's winning performance.

"It was obviously a big weekend for us to have two players win at that level," McMakin said. "I think that goes a long way for our program, and it shows not only are we getting good players here at the U of A and developing them to get them ready for the next level, but to have them go out and win on the same weekend, I think it shows the Razorback golf program is becoming very strong at both the college and pro level.

"Shauna and I are excited about the futures for both of our programs. It helps a lot in recruiting with them being on the TV on weekends to talk about Arkansas."

Landry, 32, was the No. 1 player on the Razorbacks' NCAA runner-up team in 2009, the first year of the match-play format for the final eight teams.

"He was the one who really turned our program around," McMakin said. "I brought him with me from Lamar, and he was a three-time All-American here. We owe a lot to Andrew to leave the really good teammates he liked at Lamar to come up here and be a Razorback."

Landry received a check of $1.2 million for winning at the PGA West course, where he lost a four-hole playoff to Jon Rahm two years ago. Landry won the Valero Open in 2018 for his first PGA Tour victory.

Former Razorback Sebastian Cappelen, in his first year on the tour, finished in a four-way tie for sixth at The American Express to win $218,588.

"He talked to us, and he said sixth place on the PGA Tour goes a lot farther than sixth on the Korn Ferry Tour for his checking account," McMakin said of Cappelen.

"I was looking at the bag she has in my office," Taylor said. "She signed it '#Forever a Hog.' She loves this place and had such an incredible experience here. She's proud when she goes out there to not only represent Mexico but the University of Arkansas."

By Charlie Kaijo In this June 2019 file photo, Maria Fassi tees off during the first round of the Walmart NWA Championship at the Pinnacle Country Club in Rogers.

"It was a pretty incredible sponsorship deal she got with them," Taylor said. "Kudos to her and who she is. People love her."

Fassi will make her 2020 season debut today at the Gainbridge LPGA at Boca Rio Golf Club in Boca Raton, Fla. Lopez is playing in the same event.

Landry, who got ill in Hawaii during the early portion of the PGA schedule, will be at home in Austin, Texas, this weekend before resuming his schedule at the Waste Management Phoenix Open next week.