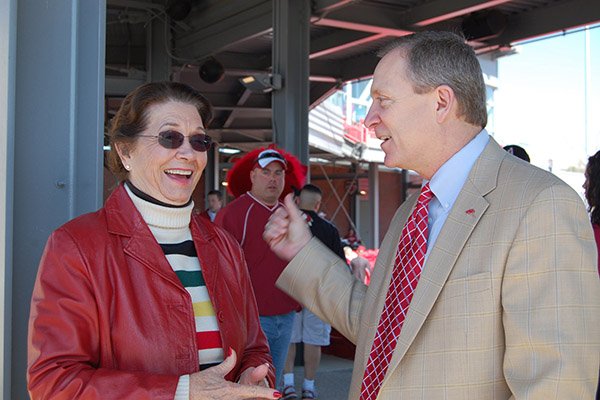 Marilyn Bogle (left) is shown with then-University of Arkansas athletics director Jeff Long during a ceremony to commemorate the opening of Bogle Park on Friday, April 11, 2009, in Fayetteville. Bogle, a longtime benefactor of Razorback athletics, died Thursday, Jan. 23, 2020, at the age of 88.

FAYETTEVILLE — Marilyn Bogle, a philanthropist who gave millions of dollars to University of Arkansas academic and athletic endeavors over the course of several decades, died Thursday at her Bentonville home. She was 88.

Along with her husband Bob, Marilyn Bogle gave lead gifts to build multiple athletic facilities on the UA campus, and endowed academic funds and scholarships.

Most of the Bogles’ financial gifts were for undisclosed amounts, although a 2013 endowment for a Bumpers College innovation fund was announced at $1 million.

Scott Varady, the executive director of the Razorback Foundation, said the couple’s donations toward athletics could be measured in the millions, and helped Arkansas’ women’s teams immensely.

“When I was at the (UA) general counsel’s office...I knew how instrumental she was in making progress with women’s athletics and how dedicated she was to that,” Varady said. “And then over time, here at the foundation it was a direct, more personal relationship.

“She was one of the pillars, I think, of Razorback athletics. When I think of supporters who helped us build a program, it couldn’t have been done without her. I know (former UA athletics director Frank) Broyles felt that way about Bob and Marilyn.”

Bogle Park, the Razorbacks’ $8.5 million softball stadium that opened in 2009, is named for the family, as is a tutoring center for athletes. The tutoring center was constructed on the east side of Donald W. Reynolds Razorback Stadium at a cost of $2.8 million in 2001, then moved inside the larger Jones Family Student-Athlete Success Center in 2015.

A bronze plaque bearing the Bogles' name and image is on display on the north side of the football stadium.

The Bogles were also lead givers toward construction of the Bev Lewis Center for Women’s Athletics. A 2002 Arkansas Democrat-Gazette article stated the Bogles had contributed about “half” of the $5.5 million cost for the facility, but they deferred when it was suggested the building bear their name.

They instead suggested the building be named for Lewis, the athletics director for Razorback women’s sports at the time and a former UA track coach. The 15,000-square-foot Lewis Center was built as a training facility for female athletes.

“My favorite thing about following the Razorbacks is supporting the women’s teams,” Marilyn Bogle told Inside Razorback Athletics magazine in 2011.

"The following is smaller, so you get an opportunity to know the young ladies who are competing….I love being involved and getting to know them.”

Marilyn Bogle grew up in Augusta and met her husband there before they were married in 1950. Varady said one of the couple’s first dates was to one of the Razorbacks’ first football games at Little Rock’s War Memorial Stadium, which opened in 1948.

In 1952, Bob Bogle was hired as the first store manager for Sam Walton’s Five and Dime in Bentonville. He was also one of Walton’s first hires after the formation of Walmart and worked for the company for 28 years before his retirement in 1982.

Bob Bogle survives his wife, as do their three children, four grandchildren and three great-grandchildren.

“Their whole family is reflective of her in the sense they’re all very supportive of the university,” Varady said, “and they all care greatly about the University of Arkansas and Razorback athletics.”