Agim earns praise for 2 good weeks in front of scouts 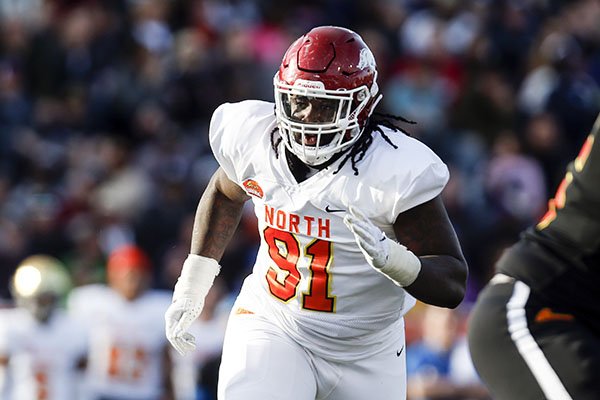 FAYETTEVILLE — For former Arkansas defensive lineman McTelvin Agim, the all-star season was successful in getting his name on the radar of NFL executives.

Agim, a Texarkana native who played high school football at Hope and was a four-year starter for the Razorbacks, played in the East-West Shrine Game on Jan. 18 and in the Senior Bowl on Saturday. His workouts in the practices leading up to those games drew rave reviews, and they appear to have put him in better position for the NFL Draft that begins April 23 in Las Vegas.

“I think he’s kind of boosted his draft stock here to where he could approach top 100 status,” said Ric Serritella of NFLDraftBible.com. “I think he was a mid-to-late-round guy coming into the all-star circuit, and he’ll depart Mobile as a late Day 2, early Day 3 (prospect).”

Agim was a late addition to the Senior Bowl roster after players who had accepted invitations to play in the game backed out.

He had turned heads the week before during practice for the East-West Shrine Game in St. Petersburg, Fla. Of Agim’s workout on Jan. 14, former Eagles, Ravens and Browns scout Daniel Jeremiah wrote on NFL.com, “That was the most dominant practice any one player had all week.”

“I think he was kind of a surprise for the East-West Shrine Game and once he got to Mobile the word was kind of out because there was a buzz about him,” Serritella said.

Once Agim arrived in Mobile, Serritella said he made an impression there, too.

“From what I’ve seen, this guy has a major bend to him for a big man, and his flexibility for his size is going to be very appealing,” Serritella said. “I think that athleticism, versatility, flexibility - those are the big positive attributes that stand out to me.”

At Arkansas, Agim bounced back and forth between defensive tackle and defensive end positions as the Razorbacks changed defensive schemes under three different coordinators in his four years. Agim finished his college career with 145 tackles, including 30.5 for loss and 15 sacks in 47 games. He also forced six fumbles.

Serritella said Agim likely projects to a 3-technique lineman at the pro level.

“I think anytime you can get a guy that can get to the backfield, create tackles for loss, apply pressure on the quarterback and be a backfield disruptor from the interior of the line - there’s not enough of those guys,” Serritella said. “Teams are going to value that.”

The biggest critique of Agim, Serritella said, was improper hand placement that caused him to be slow to get off some blocks.

“Otherwise, he’s a very good looking player,” Serritella said, adding that he thinks Agim has a good chance to receive an invitation to the NFL Scouting Combine in Indianapolis from Feb. 23-March 2.

McTelvin Agim resets the line of scrimmage and forces the RB backward. Rest of the team swarms for the TFL pic.twitter.com/stNp7UVpj6

Agim was one of two former Arkansas players who played in postseason all-star games, along with tight end Cheyenne O’Grady at the NFLPA Collegiate Bowl. Linebacker De’Jon Harris did not attend the East-West Shrine Game after being selected to play in the game.

Serritella said O’Grady showed great hands in practice at the NFLPA game but said he needs to improve his route running and blocking.

The biggest question surrounding O’Grady stems from his abrupt departure from the Arkansas team with four games remaining in his senior season. He had 33 receptions for 372 yards and three touchdowns at the time, and in his final game with the Razorbacks caught a touchdown at Alabama - the 12th of his career to break the program record for a tight end.

“That whole situation is where teams are going to have to decide, ‘Do we want to invest a draft pick on this player?’” said Serritella, who is an advance scout for the NFLPA game. “What we told him going into the interview process at the NFLPA Bowl was, ‘Just be honest, be straightforward, tell the truth and show that you’ve learned from the situation, and maybe someone will take a shot on you.’

“When you have these types of concerns a lot of times, as a personnel evaluator like myself, I’m looking at C.J. O’Grady and saying, ‘Man, I’d love to take a sixth- or seventh-round pick and all the upside that comes with it….I think where the power struggle comes in the war room on draft weekend is coaches don’t want to work with a guy that ‘quit’ on his team. The teams are going to be divided and you’re going to have to surround him with a proven, veteran coaching staff with strong personalities, and if he can get in the right situation, he’s got incredible upside.

“He really stood out throughout the week of practice and made quite a few splash plays that grabbed the attention of the scouts.” 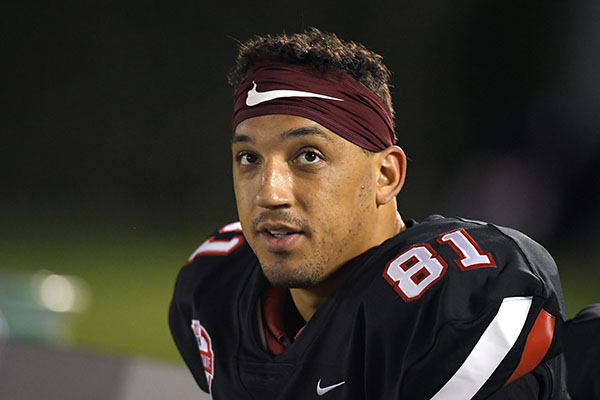 American Team tight end Cheyenne O'Grady, of Arkansas, sits on the sideline during the second half of the Collegiate Bowl college football game against the National Team Saturday, Jan. 18, 2020, in Pasadena, Calif. (AP Photo/Mark J. Terrill)