Observations from Arkansas' first baseball practice of the preseason 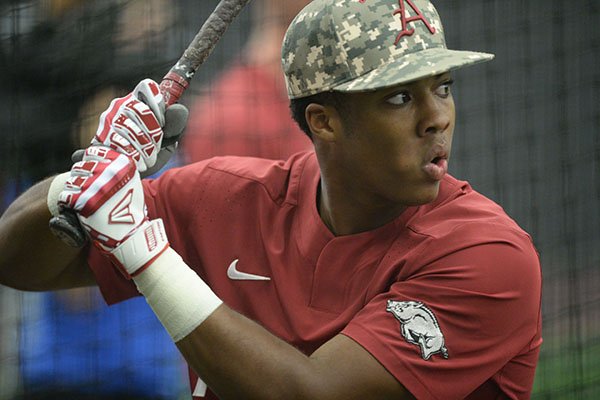 The Razorbacks’ six-inning intrasquad scrimmage was highlighted by a good performance at the plate for sophomore center fielder Christian Franklin, who had three hits, an RBI and scored a run batting third in the lineup.

Left fielder Braydon Webb and catcher Dominic Tamez, both newcomers, also had multiple hits with two apiece. Webb, a junior college transfer who is a strong candidate to hit leadoff for the Razorbacks, tripled to the wall in center field to lead off the bottom of the third inning and scored on the second of Franklin’s three hits, a single two at-bats later.

Franklin and Heston Kjerstad also scored in the inning when first baseman Cole Austin made a great stop on a groundball from Cason Tollett, but committed an error with an errant flip to the bag toward covering pitcher Patrick Wicklander. Kjerstad reached on a walk and added a double to opposite-field left in his final at-bat, which led to his second run scored.

Wicklander and Connor Noland, the Razorbacks’ projected top two starting pitchers, each threw two strong innings before running into trouble in the third.

Wicklander, pitching for the Black team, struck out three of the first six batters he faced but ran into trouble when the opposing seven-man lineup came to the plate for the second time, beginning with Webb’s triple. The Red team scored three times in the inning, the difference in its 4-1 victory.

Wicklander had been hit hard to end the second inning when Jesse Pierce drove a ball to right-center field and off the glove of a diving Trey Harris. Pierce attempted to leg out the hit into a triple, but was out easily at third base on a strong relay throw from second baseman Robert Moore.

Moore, a freshman who enrolled at Arkansas this semester instead of playing his senior year of high school baseball, threw the ball from the grass between first and second base. It was a perfect strike to the waiting glove of third baseman Jacob Nesbit. Moore had a line-drive single off Noland in the next inning.

Noland retired the first four batters he faced, including Matt Goodheart and Casey Martin, and had three strikeouts through two innings. He began to falter in the third when Tamez singled to lead off, Moore singled with one out and Goodheart walked. Goodheart, who is nursing a hamstring injury, did not run bases.

Tamez scored from third on a double steal with Moore. It was the Black team’s only run of the day. It had chances for more, but stranded the bases loaded in the third and fourth innings.

Freshman right hander Evan Gray got out of a bases-loaded jam when Austin grounded out to end the third, and freshman left hander Zack Morris struck out Curtis Washington in three pitches to close out the fourth.

Morris, whose only blemish was a walk in 1 ⅓ innings, and sophomore right hander Jacob Burton were the most impressive pitchers in relief. Burton struck out three of four batters he faced and hit a batter in the ninth pitch of an at-bat.

A radar gun was not displayed inside the stadium Saturday, but Burton and Elijah Trest were throwing visibly hard. Arkansas coach Dave Van Horn mentioned both as possible closers during his meeting with media members Friday, saying Burton had been clocked at 98 mph and Trest at 95 mph.

Perhaps most noteworthy from the scrimmage was the team speed displayed, primarily from newcomers Webb and Moore. The Razorbacks appear to have the capability to be aggressive on the bases again this season.

Arkansas is scheduled to scrimmage again Sunday beginning at 1:30 p.m.