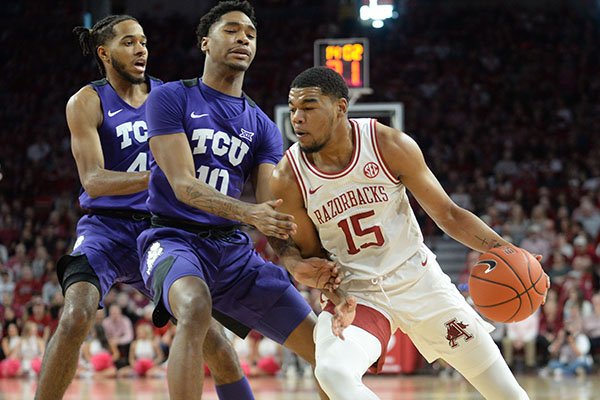 FAYETTEVILLE -- The Big 12/SEC Challenge got more challenging for the University of Arkansas basketball team about 10:30 a.m. Saturday before the Razorbacks played TCU.

That's when Arkansas Coach Eric Musselman determined during the team's shoot-around that sophomore guard Isaiah Joe -- who had started every game for the Razorbacks the past two seasons and is averaging 16.8 points with an SEC-high 67 three-point baskets -- wouldn't play because of a knee injury.

Arkansas was coming off back-to-back losses to Kentucky and Mississippi State and already lacked depth that became thinner going against TCU, which beat No. 18 Texas Tech on Tuesday night.

But the Razorbacks proved they were up for the challenge in the Challenge as they beat the Horned Frogs 78-67 before an announced sellout crowd of 19,200 at Walton Arena.

"I thought it was our best game of the year on both sides of the ball," Musselman said.

Senior guard Jimmy Whitt and junior guard Mason Jones each scored 20 points to lead the Razorbacks (15-4), and sophomore guard Desi Sills scored 18 points in his first game off the bench this season.

"We knew we had to step up real big," Arkansas junior guard Jalen Harris, who had 7 points, 6 assists and 4 rebounds in his first start, said of playing without Joe. "Losing somebody as key as Isaiah, we knew it was next man up."

Musselman announced before the game that Joe had knee inflammation after the Ole Miss game two weeks ago -- when he scored 34 points in the Razorbacks' 76-72 victory -- and that he aggravated it in Wednesday night's game at Mississippi State.

"The decision was made today that it would be in Isaiah's best interest to rest his knee for the TCU game," Musselman said in a pregame statement.

Musselman said after the game he's not sure about Joe's status for Arkansas' next game against South Carolina on Wednesday night.

"I'm not a trainer or anything," Musselman said. "[UA trainer] Mark [O'Neal] and Isaiah will continue to do rehab. Today was when we knew for sure that he wasn't going to play."

Arkansas shot 54% from the field (27 of 50), but relied more on drives to the basket without Joe while hitting 6 of 9 three-pointers -- including Sills going 3 of 3.

"Our shot selection from three was awesome," Musselman said. "I don't think we took any bad shots. I thought it was the most efficient offensive game we've had all season long."

"It's interesting because I think they really got more penetration and attacked and got into the lane," TCU Coach Jamie Dixon said of how the Razorbacks' offense operated without Joe. "I mean, obviously if they shot 54% and they shot 6 of 9 from three, it's pretty good. So give them credit for doing that.

"You hope you get them in foul trouble when they lose a guy, don't play a lot of guys. Couldn't do it. Just wasn't going to happen."

Jones played just nine minutes in the first half because of two fouls and scored one point, but in the second half he hit 4 of 8 shots -- including 2 of 3 three-pointers -- and 9 of 13 free throws for 19 second-half points.

"He got in the lane," Dixon said. "I was really disappointed how we guarded the penetration. So, he's good. That's what he does. Give him credit. I thought we'd do a better job with that, but we didn't."

Harris said the Razorbacks weren't getting enough touches in the lane the past few games.

"So today the big emphasis was to just get in the paint and then spread out," Harris said. "So there would be more open threes rather than everybody sitting around the arc flying up threes. We played inside-out today."

Arkansas got solid contributions inside from senior Adrio Bailey (7 points, 6 rebounds) and sophomore Reggie Chaney (6 points), who made his first start of the season.

"We continue to create mismatches where teams kind of adjust to us instead of the other way around," Musselman said. "Although I really couldn't adjust anyhow, since we've only got so many guys that can play.

"But they had an inside guy that was really hurting us, and they had to take him out in stretches because we just kept putting him in the middle of the pick and roll."

While the Razorbacks couldn't stop Samuel around the basket, Whitt held Horned Frogs senior guard Desmond Bane -- who came into the game averaging 17.2 points and had 27 against Texas Tech -- to eight points.

"The turnovers killed us," Dixon said.

TCU had 13 offensive rebounds -- 7 by Samuel -- but the Horned Frogs finished with only a 34-26 overall rebounding edge.

Arkansas' run started with 10:12 left when Dixon was called for a technical foul by official Joe Lindsay. Harris hit both technical free throws, then Jones was fouled on a rebound and hit 1 of 2 free throws to put the Razorbacks ahead 54-46.

Sills hit a three-pointer with an assist from Jones to make it 59-48, then Jones drove down the middle of the lane for a basket and Sills scored on a fast-break layup to make it a 15-point lead.

TCU didn't draw closer than nine points the rest of the way as the Razorbacks began slowing the pace.

"From about the six-minute mark on, I thought we did a great job of running the shot clock down to three to five seconds," Musselman said. "It doesn't always look pretty when you do that, but the name of the game is to try to win."

UP NEXT Arkansas plays South Carolina at 7:30 p.m. Wednesday at Walton Arena in Fayetteville.