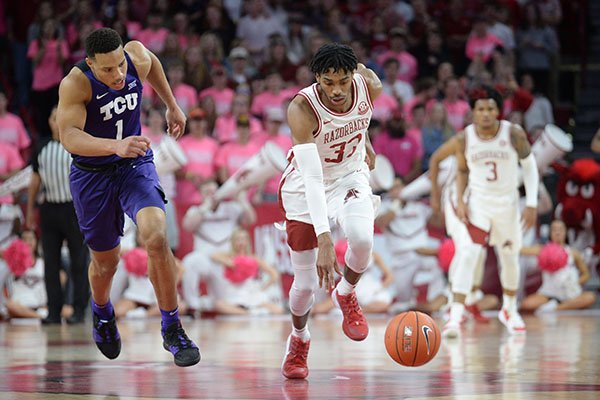 With 17.6 seconds to play and the University of Arkansas leading 78-67, TCU’s Jamie Dixon took a timeout.

Dixon is an excellent coach, but no one is good enough to draw up an 11-point play, and the Razorbacks ran out the clock to improve to 15-4.

Maybe Dixon was trying to let his Horned Frogs regain enough air to walk off the court. The Razorbacks ran almost at will, and TCU chased and too often couldn’t catch up.

It was a must-win game for the Hogs, who have positioned themselves as a candidate for the NCAA Tournament in Eric Musselman’s first season.

Considering he took over a team short on depth and height, a tourney invite didn’t seem likely going into the season. But the loud-and-proud Razorback Nation is seeing the Hogs predicted as a No. 8 seed in some mock brackets.

The NCAA’s NET rankings had the Hogs No. 34 entering Saturday, and a loss to No. 58 TCU wouldn’t have been good, although the Horned Frogs were fresh off an upset win over Texas Tech, which has become a national power under former UALR coach Chris Beard.

He wanted to control the tempo. The Razorbacks did.

He wanted high-percentage shots. The Hogs obliged, shooting only nine threes, of which they made six. The Razorbacks were 27 of 50 from the field, and 54% will win most games.

He wanted his team to find a way to get some rebounds. Despite the much taller Horned Frogs being led by 6-11 Kevin Samuel’s 24 points and 18 rebounds, the Razorbacks were outrebounded just 34-26.

He also knew his team had to neutralize TCU leading scorer Desmond Bane, and he was held to just 8 points and 6 field-goal attempts in 37 minutes.

Jimmy Whitt did an outstanding job of denying Bane the ball.

Whitt also was part of a duo who picked up the scoring slack with Isaiah Joe on the bench nursing an inflamed knee.

Whitt scored 20 points and Desi Sills added 18. That production along with Mason Jones’ 20 points — 19 in the second half — were too much for the Horned Frogs.

And it keeps the Razorbacks on the NCAA Tournament radar, although nothing is guaranteed with 12 regular-season games left in the topsy-turvy SEC.

But Musselman seems to give his team a chance every time out.

These Hogs have bought into his need for speed and defense.

The longer the game went, the more the Horned Frogs were running uphill. They suffered 19 turnovers, and although the Hogs converted those into only 15 points, they still gave the home team control of the tempo.

In the opening six minutes, the Horned Frogs controlled the tempo and managed an 11-10 lead with 14:31 to play in the first half. An early timeout by Musselman slowed downed TCU, which fired out of the blocks.

Mostly because of Samuel’s height, TCU started 5 of 8 from the field, but the Horned Frogs finished the half 6 of 16 and in the same span had 9 turnovers to finish the half with 12. Arkansas led just 33-29 at halftime because it managed just seven points off turnovers.

The second half was all Hogs as they kept an unforgiving pace with a relentless defense.

Those are becoming signatures of the Mussel Hustle.

In the final minutes with TCU forced to foul, the Hogs made free throws and came away with the must-win.

Whatever his reasons, Dixon took a timeout with 17.6 seconds to play in a game he had absolutely no chance of winning.