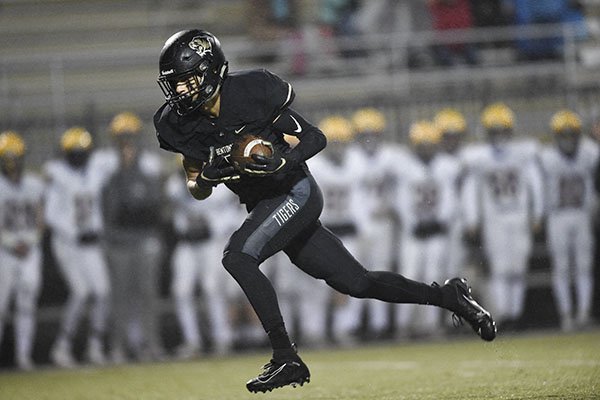 Bentonville receiver Chas Nimrod scores a touchdown during a game against Little Rock Catholic on Friday, Nov. 22, 2019, at Tiger Stadium in Bentonville.

Arkansas usually produces five to seven SEC-caliber football prospects a year, but the 2022 class looks to have a chance to be an above average crop.

University of Arkansas Coach Sam Pittman has extended a scholarship offer to sophomore offensive lineman E'Marion Harris, 6-6, 310 pounds, of Joe T. Robinson. He also has offers from Alabama, Miami, Tennessee, Oklahoma and others.

Jointer suffered an anterior cruciate ligament injury in the second game of this season, which likely curbed his additional offers.

Bentonville sophomore receiver Chas Nimrod, 6-2, 170, is one to keep an eye on going forward. He has the speed and acceleration to grab the attention of college recruiters.

He received his first scholarship offer from Memphis on Thursday, and the Tigers won't be the last. He recorded 16 receptions for 376 yards, 4 touchdowns and had 1 carry for a 26-yard touchdown while seeing limited early season action because of an injury. Nimrod broke his wrist during 7-on-7 competition in the summer.

"Truthfully, before that he was kind of dominating the games and this was before playing a varsity snap," Bentonville Coach Jody Grant said.

"Once we got into conference play, he started to become more and more of a threat for us," Grant said. "He's obviously a deep threat and kickoff return guy. Once we got into Week 8, 9 and 10 and the playoffs, he was obviously a dangerous threat where people were paying more and more attention to him, which was helping us with some of the other guys.

"I think he has a chance to be one of the top receivers in the state. He runs really well. A natural route runner. Good hands."

Nimrod, who has lived in Northwest Arkansas since the second grade, was born in Indianapolis. He lived in Branson, Mo., prior to his move to Arkansas. He grew up fond of Ohio State, LSU, Georgia and Texas.

There's a good chance he adds height in the next few years. His father is 6-6 while his mother stands 5-10.

Camden Fairview offensive lineman Timothy Dawn, 6-5, 280, is another promising sophomore. He has an offer from Kansas, and Oklahoma is expected to visit the school Monday. Pittman recently made contact with Cardinals Coach Jake Mondren about Dawn.

Pulaski Academy running back Joe Himon received an offer from SMU in the spring of his freshman year.

Joe T. Robinson running back Daryl Searcy Jr., 6-0, 196, is another to watch in the next two years. He has an early offer from Arkansas State University.

There will be several others in the class who emerge over the next two years.