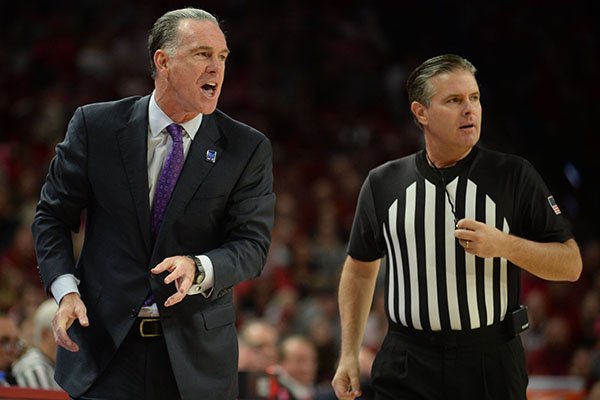 TCU coach Jamie Dixon directs his players Saturday, Jan. 25, 2020, during the first half of play against Arkansas in Bud Walton Arena.

FAYETTEVILLE — TCU Coach Jamie Dixon was clearly not pleased with the technical assessed to him by referee Joe Lindsay from across the court with 10:12 left in the game and Arkansas leading 51-46.

Jimmy Whitt was in possession far from the basket with the shot clock around five seconds when Lindsay made the call.

“I thought the technical foul was really a bad mistake on my part for saying ‘carry,’ but that’s all I said,” Dixon said. “Carry, no bad words, nothing. Carry.”

Dixon said he was very surprised by the technical foul call, which led to two Mason Jones free throws.

Asked if it upset him, Dixon got sarcastic.

“Nah, I’m very happy,” he said, smiling. “You guys are happy. They were happy. The official was happy.”

Dixon was the second visiting coach to receive a technical foul at Bud Walton Arena. Kentucky's John Calipari was ejected after picking up consecutive technical fouls with 8:17 remaining last Saturday.

Desi Sills’ streak of 26 consecutive starts ended Saturday on the heels of a poor performance Wednesday at Mississippi State.

The guard did not let coming off the bench get him down. The sophomore poured in 18 points on 7-of-8 shooting, including 3 of 3 from three-point range.

Sills notched the second-highest scoring total of his career on his most efficient shooting game. He added 2 steals, 2 rebounds and 1 assist to go along with a game-high-tying +12 on the plus-minus chart.

Sills struggled to 1-of-4 shooting, 0 of 2 from three-point range, while scoring 2 points in 19 minutes in a 77-70 loss at Mississippi State.

“Sills was big for them, obviously,” TCU Coach Jamie Dixon said. “He hadn’t been shooting like that. He did. And that killed us.”

Sills subbed in with just 1:11 off the clock to open the game and cashed in a pair of early three-pointers, the last of which gave the Razorbacks a 14-11 lead they would never relinquish.

“I had to be ready,” Sills said of coming off the bench. “I couldn’t get down or nothing. I just had to be prepared and do what I have to do to help this team win.”

Musselman said Sills handled the conversation about not starting the right way.

“Sometimes just a little change of scenery coming off the bench, seeing the flow of the game, sometimes it alleviates a little bit of pressure for a player. I’m just really proud of how he handled not starting, because that’s not an easy thing for a young player at all.”

Bane did not score in the first half on 0-of-2 shooting, and the 17.2 point-per-game scorer finished with 8 points on 3-of-6 shooting, including 2 of 3 from three-point range.

“I don’t know that there’s a college guard defensively that can do any more than Jimmy Whitt’s doing,” Musselman said. “I don’t have any stats … but I’d like to know how many games Bane has not had double figures, and how many games he only got six shots up.”

Bane had scored in double figures in 16 of 18 games leading into Saturday, and had taken less than 10 shots only once, a 4-of-8 performance at West Virginia on Jan. 14.

Jalen Harris, making his first start of the season, contributed a season-high 6 assists and added 7 points on 2-of-4 shooting, 4 rebounds, 2 turnovers and a plus-minus rating of +6.

“He’s just so quick with the basketball, he changes our pace,” Coach Eric Musselman said. “Our wings run harder when he’s in the game because they know he’s going to pitch it ahead.”

The victory gave Arkansas a victory over every other former Southwest Conference team since the Razorbacks left their former conference.

The Hogs have a 23-15 mark against their former conference rivals since leaving the league for the 1991-92 season.

The Razorbacks have a 105-38 series lead against the Frogs, the most wins Arkansas has over any opponent.

Former Razorback great Sidney Moncrief, who was inducted into the Naismith Memorial Hall of Fame, was introduced to the crowd during the first half and chatted with the media at halftime.

Moncrief said his visit to Northwest Arkansas coincided with nonprofit appearances at local schools and a screening of a new documentary.

“It’s called All For the Hogs, and we previewed it this morning,” said Moncrief, detailing the role the famed Triplets — guards Moncrief, Ron Brewer and Marvin Delph — played from a social standpoint in the late 1970s. “It’s about how the Triplets helped to close the gap with racial relationships in the state of Arkansas.

“It takes us from 1957 all the way until we finished playing for the Razorbacks, and how blacks, whites, Hispanics, rich, poor, everyone pulled for the Hogs. All for the Hogs. It was partly because of the impact that we had with basketball. It’s very exciting, a very well done piece.”