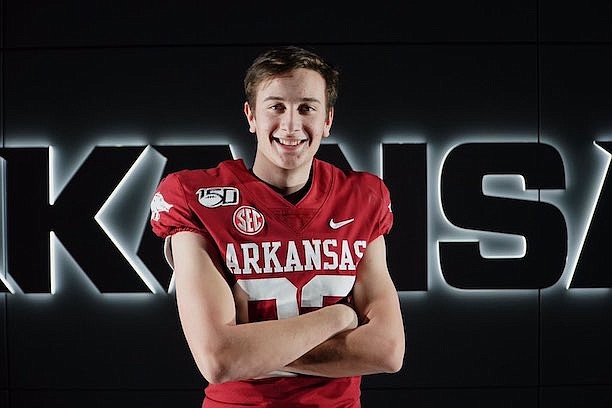 FAYETTEVILLE — Arkansas made one of the nation’s best kickers an offer that he couldn’t refuse.

“Very excited and blessed to announce that I am committed to Arkansas!,” Calvaruso tweeted.

“Arkansas definitely picked up one of the strongest kickoff legs in the country of any high school kid,” Kicking World’s Brent Grablachoff said Monday night. “He is just tremendous.”

Calvaruso converted 11 of 15 field goals as a senior with a long of 50 yards, connected on 42 of 43 PATs, had a 42-yard punting average with a long of 67 and also threw a 20-yard touchdown pass on a fake field goal.

He also kicked a 55-yard field goal at Kohl’s Kicking Camp in July and is ranked as a five-star kicking prospect, a four-star punting prospect and the 20th-best kicker in the country in Kohl’s rankings.

But it was his kickoffs which differentiated him from others as he had touch backs on 80 percent of his boots and drilled several threw the uprights.

“He is a very good field goal kicker and punter as well, but for kickoffs he is just lights out,” Grablachoff said. “He won our kickoff competition at our big showcase that we had in December and he was one of 60 kids from around the country that we invited out of 1,800.

Grablachoff notes that Calvaruso, who was 25-of-31 on field goals in his high school career and 122-of-129 on extra points, was a find of former Georgia and current Arkansas special teams coach Scott Fountain.

“I got to know Coach Fountain the last couple of months because he recruited our top 2020 kid kicker name Jared Zirkel and Vito was our number two strongest leg kicker in the class,” Grablachoff said. “Jared is committed to Georgia and has an NFL kickoff leg and Vito is not too far behind.”

Grablachoff believes Calvaruso has a great mental make up for a kicker.

“He is pretty low key and very reserved,” Grablachoff said. “He is a great young man, very polite and respectful. He doesn’t really say much and kind of lets his leg do all the talking. I have learned over the years that is a pretty good attribute for a kicker.

Thurman was 6 of 8 on field goals with a long of 38 yards, and 21 of 25 on extra points while missing five games due to injury as a senior.

Chris Sailer Kicking ranks Thurman, who chose to walk on at Arkansas instead of accepting a scholarship at UCA, as a five-star prospect and the No. 61 kicker overall.