'He just pushes it': Harris changes game with pace 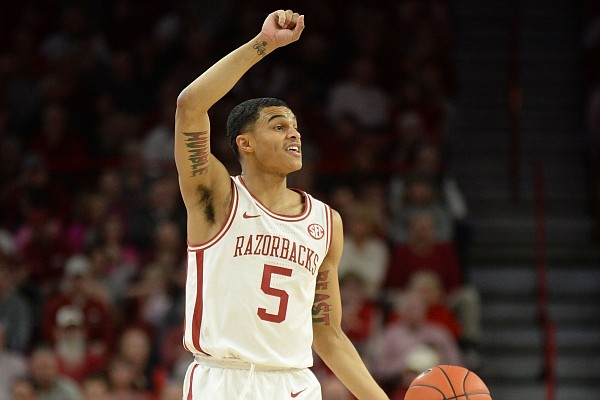 Arkansas Saturday, Jan. 25, 2020, Texas Christian during the second half of the Razorbacks' 78-67 win in Bud Walton Arena. Visit nwaonline.com/photos/ for more photographs from the game.

In the starting lineup for the first time since the Razorbacks' 2018-19 season finale at Indiana in the NIT last March, Harris added seven points - his most in nearly two months - and a season-high six assists in the 78-67 win over the Horned Frogs in the Big 12/SEC Challenge.

His impressive and largely clean floor game continued a trend of facilitating and valuing the basketball in January. Through seven games this month, Harris has dished out 21 assists against just four turnovers.

Two of those miscues - both against TCU - were player-control fouls, too.

"He’s just so quick with the basketball. He changes our pace," Arkansas coach Eric Musselman said following Saturday's game. "Our wings run harder when he’s in the game because they know he’s going to pitch it ahead. He changes the complexion of the game for us, for sure."

Harris' 21 assists have generated 48 points for the Razorbacks, including 13 each in home wins over Texas A&M and the Horned Frogs. Sophomore forward Reggie Chaney and Whitt have been the greatest beneficiaries of Harris' assists, scoring six and five buckets, respectively, this month off his finds.

In conference games, he ranks No. 4 in the SEC with a turnover rate of 7.7 percent, according to KenPom analytics. Sills leads the league with a stellar mark of 4.4 percent.

"It felt good getting back out in the lineup," Harris said Saturday. "But I knew it was bigger than just starting. This was a game we really needed to win. We were desperate for a win, so that really played a small (role) in the game."

With Harris on the floor against TCU, Arkansas' offense operated at a hyper-efficient rate.

The Razorbacks scored 1.24 points per possession in his 51 offensive trips, according to HoopLens analytics, shot 52.9 percent on 2-point attempts and 62.5 percent beyond the arc.

And in four January wins, Arkansas lineups featuring Harris have scored at a 1.06 point-per-possession clip, turned the ball over on just 13.3 percent of possessions and shot 44.8 percent from 3-point range.

Harris consistently pushes the tempo for the Razorbacks, and that is what Musselman likes. Often, Harris will sprint with the basketball into the frontcourt with 27-28 seconds remaining on the shot clock, which can lead to more efficient offensive possessions.

Musselman says he stresses to players, particularly guards, that he does not want them to walk the ball up the floor, which happened semi-regularly early in the season, or looking to the bench for a play call.

"Jalen doesn't do walk-ups, and he doesn't do look-ats. He just pushes it," Musselman added Monday. "Late game (versus TCU), I think about six minutes to play, I said, 'Hey, keep pushing it, get that thing to the top of the key, push and probe, see what you’ve got. If you don’t have anything then backpedal and glance over and we’ll give you a play call at that point.'

"But we wanted him to play with pace, because he does such a good job of getting other people layups or clean looks with their feet set, guys that have 10 toes toward the rim. He does a good job of delivering the ball at the proper time."

Harris was key in Arkansas racking up 18 fastbreak points against TCU, the team's best mark since the win over Valparaiso (22) in North Little Rock. Two of his assists, which found Chaney and Sills, came in transition and led to layups. Harris also hit Chaney for a dunk in a halfcourt setting in the second half.

On top of his solid assists numbers, the junior has provided a bit of perimeter shooting over the last three games. He is 3 of 7 from 3-point range in that span, and 2 of 5 on the left side of the floor. Harris has now made two more 3s than last season on 33 fewer attempts.

Entering Wednesday's game against South Carolina in Bud Walton Arena, there is a lot to like about Harris' play so far in 2020.