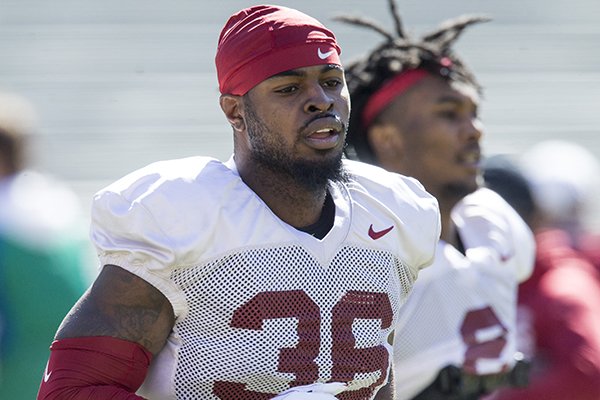 Arkansas linebacker D'Vone McClure runs onto the field for a practice Saturday, March 9, 2019, in Fayetteville.

Former University of Arkansas linebacker D’Vone McClure was arrested in Elkins on Sunday and charged on allegations of third degree assault on a family member, third degree endangering the welfare of a minor and interference with emergency communications.

McClure, whose home address is listed in Elkins, was brought to the Washington County Detention Center at 3:37 a.m. on Sunday and released on $3,140 bond Sunday afternoon. He faces a hearing in Elkins District Court on Feb. 25.

A spokesman for the Elkins Police Department said Monday afternoon that an investigation into the incident was still ongoing and a police report was not yet available.

McClure, a former outfielder in the Cleveland Indians organization, stepped away from the football program in October after notching 11 tackles in six games.