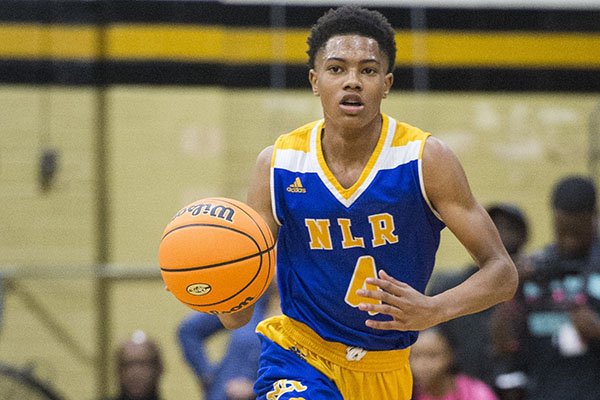 "I was really excited when I got the offer from the Hogs," Warren said. "They're really doing something great on the Hill right now. It truly meant something to me for them to give me the offer as a freshman."

Warren, 6-1, 145 pounds, had an offer from Oral Roberts before the Hogs joined the Golden Eagles. Texas A&M and Oklahoma State also are showing interest.

Williams caught Warren and Ware in action when the Charging Wildcats played at Fort Smith Southside on Jan. 17.

"They like my [basketball] IQ for my age," Warren said. "It really showed and it's really above my class, and I knew how to play the right way, and they saw that and it translates to the next level."

"Bryson is the total package," Rice said. "He's doing something that's never been done at North Little Rock, a ninth-grader being varsity starter and a main piece of what we're doing."

"Skill-wise and shooting, he's one of the top ninth-graders in the nation," Rice said. "On top of it, he has a great family structure and he's a 4.0 student. You put all that together and that's special. Everything he does is elite. He's an elite player, elite student, elite teammate."

The Hogs hosted nine recruits, including Warren and Ware, for the Kentucky game Jan. 18.

"I like how the fans were into it," Warren said. "I couldn't really sit down at all because they were standing up in front of me. Nobody was sitting down."

The crowd noise went to another level when Kentucky Coach John Calipari was ejected at the 8:19 mark of the second half.

"I saw people covering their ears," Warren said. "I know that wasn't helping."

Warren has been impressed with Coach Eric Musselman's coaching ability and energy level.

"I like that he's very into it," Warren said. "He has high expectations because he wants the best out of his players, and I see that. I like how it feels like he's playing in the game."

He played for the Oklahoma-based 14- and 15-under Team Griffin squads last year, and will play for Kansas City-based Mokan Elite this spring and summer.

Ware, 6-10, 195, also had an offer from Oral Roberts before the Razorbacks entered the picture with an offer. Virginia Tech, Texas Tech, Murray State and Auburn also are showing interest.

"I was excited. I was happy I got it," Ware said of the Arkansas offer. "I worked hard for it, too. It felt good. It's always home."

He averaged 13 points, 11 rebounds and 4 blocked shots for Arkansas All Red during the spring and summer of last year.

"My post-up game has gotten way better," he said. "I've been working on my three-point and midrange shot, and I've gotten stronger."

Rice had a heart-to-heart talk with Ware earlier in the season.

"Kelel in the last month, I think the light bulb has flipped on," Rice said. "Early in the year, he had colleges coming to watch him. We talked about it. He just didn't have a motor all the time."

Ware took in what Rice had to say and has picked up his play.

"It really has the last month," Rice said. "He's played really, really well. He always has a good touch around the basket, but he's been a presence defensively. He wasn't earlier in the year, but he sure is now."

The Arkansas fans at the Kentucky game also impressed Ware.

"It was loud, especially when he [Calipari] got ejected," said Ware, who's planning to visit Virginia Tech on Feb. 15.