Joe is questionable for South Carolina 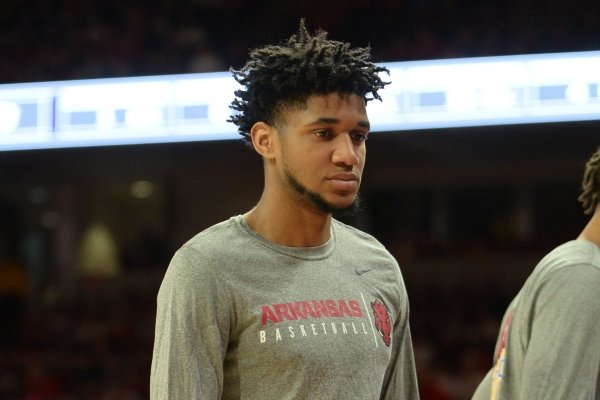 Coach Eric Musselman said in his Monday news conference that Joe was not in the practice plan for Monday. The sophomore from Fort Smith missed his first career game Saturday in the Razorbacks' 78-67 victory over TCU.

Joe has been dealing with the sore knee since he scored a career-high-tying 34 points in the Razorbacks' 76-72 victory at Ole Miss on Jan. 11. Swelling in the knee reoccurred after Arkansas' 77-70 loss at Mississippi State on Wednesday.

In his absence, guards Mason Jones, Jimmy Whitt and Desi Sills combined for 58 points on 19-of-34 shooting against TCU. Sills scored a season-high 18 points that featured 7-of-8 shooting, and 3 of 3 from three-point range.

"He'll suit up and probably do what he did two days before our last game, which was kind of nothing," said Arkansas Coach Eric Musselman, adding that Joe has spent a lot of time with head athletic trainer Mark O'Neal.

Musselman said Joe probably would get a few shots up Monday.

"If you get shots up and stuff ... then does it swell?" he asked. "I have no idea. If he does limited stuff today, is there swelling tomorrow? Only time will tell."

South Carolina Coach Frank Martin said he was not sure of Joe's status.

"I know he's an elite level shooter," Martin said. "And when you play on a team that has so much aggressive downhill guard play as they do, it's going to create open threes for you."