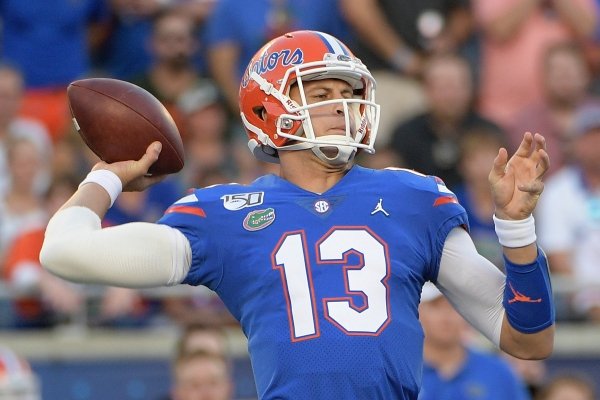 LITTLE ROCK — Hoping for something insightful and/or concrete concerning expectations for quarterback Feleipe Franks, the man who broached the subject received a response that was insipid and a cop-out.

Pity the radio show host in Fayetteville who brought up the Florida transfer and had to deal with the answer on the air. A pro, he was kind enough not to embarrass the Little Rock-based guest who babbled something about Franks doing more than Nick Starkel and Ben Hicks, and less than Joe Burrow.

Not very definitive, the host said.

Somebody better prepared might have cited Franks starting 21 games his first two years with the Gators or, at the very least, expanded the list of extremely successful transfers by tacking on Justin Fields at Ohio State and Jalen Hurts at Alabama. After all, that trio - the Hesiman winner Burrow of LSU included - guided their teams to the College Football Playoff, but all three had far more help than Franks or anybody else that is the Arkansas starter in September.

Undeterred, the host made the valid point that Franks could make the difference in a game or two.

Understandably, the assumption is that Franks will start ahead of redshirt freshman KJ Jefferson, senior Jack Lindsey and redshirt sophomore John Stephen Jones. Considering Franks’ career at Florida, the conclusion makes sense, but Hicks started 33 games at SMU and Starkel started five games and was a close second to Kellen Mond at Texas A&M, and both disappointed at Arkansas.

One factor in determining the starter is offensive coordinator Kendal Briles’ emphasis on playing a quarterback who can run and throw. In three of Briles’ last four years, his quarterback has been one of the top three rushers on the team.

The 6-foot-6, 238-pound Franks had a decent year running the ball as a sophomore — 110 carries for 350 yards — but Jefferson was considered one of the best dual-threat quarterbacks in the country coming out of high school.

Because Briles has barely been on the job a month and all four quarterbacks are on campus, the candidates start out even as far as knowledge of the system. A year ago, Hicks’ supposed advantage was familiarity with the ways of Chad Morris and Joe Craddock.

Once Franks, who dislocated and broke his right ankle in the Sept. 14 game at Kentucky, announced that he was headed to Arkansas, a postseason remark by Florida coach Dan Mullen prompted an inquiry concerning Franks’ immediate availability.

Before citing Mullen’s statement, know that Kyle Trask replaced Franks vs. Kentucky and rallied the Gators from a 21-10 deficit to a 29-21 victory. In late November, a day after Trask completed an 8-2 run as the starter with a 40-17 victory over Florida State, Franks’ goodbye to Gainesville on Instagram included a special thank-you to Mullen and quarterbacks coach Brian Johnson.

Mullen responded by saying Franks’ injury likely would have kept him out of spring practice, putting him behind redshirt senior Trask and redshirt freshman Emory Jones.

Maybe player and coach knew Trask was more effective than Franks running the offense and Mullen was simply providing cover for the exit of the more highly recruited athlete.

More than likely, 15 spring practices won’t be sufficient to identify the Arkansas starter and fall practice will begin with Franks and maybe Jefferson sharing the top spot on the depth chart. Hopefully, two weeks or so deep in fall practice, the coaches will announce a clear-cut No. 1.

Forty-plus years ago, former Arkansas coach Lou Holtz often played two quarterbacks early in the season, inserting the backup on the game’s third series to check out No. 2 under pressure and to keep No. 1 on his toes. Once the nonconference games were over, he would use the backup on occasion, but there was no predetermined time for the substitution.

The game plan was different in 1978 when Holtz had the luxury of experienced quarterbacks in No. 1 Ron Calcagni and No. 2 Kevin Scanlon.

That year, Holtz told Scanlon he planned to play him in each half, but couldn’t say when. In a game or two, he inserted Scanlon for a single play in a particular half, often to throw a specific deep pass.

“When he told me I’d play in each half, I was still the backup,” Scanlon said. “He did not want a QB controversy. That was clear on all of his teams.”

A better passer than Calcagni, Scanlon played in every game, but Calcagni performed well so there was no controversy. “I was going to go in for a change of pace or for a spark, not to take over the job,” Scanlon said. “ … he only had one starter, period.”