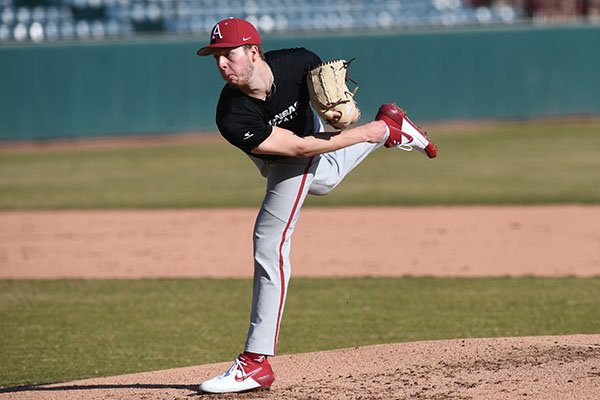 Bolden, a right hander from Texarkana, started and pitched one inning in the Razorbacks’ intrasquad scrimmage at Baum-Walker Stadium. It was a scheduled short start - his first time to face live hitters since he underwent surgery in December 2018.

He retired three of four batters he faced - one batter reached because of an error - including hot-hitting outfielder Braydon Webb, who struck out to lead off the inning.

“I thought he did a great job,” Arkansas coach Dave Van Horn said. “He threw nothing but strikes, 88-89 (mph). It was his first time out here and the velocity is coming.

“He did out here today exactly what he’s been doing in bullpens, and that’s throwing three pitches for a strike. We love his mound presence and he’s got some experience. We’re all pulling for him.”

Bolden can help solidify an already-deep Razorback bullpen this year. He pitched 28 2/3 innings over 10 appearances for Arkansas in 2018, recording a 3-0 record and 4.40 ERA.

His best performances that year included three scoreless innings during a midweek win over Texas - his mother's favorite team when he was growing up - and a career-long seven-inning start against Louisiana-Monroe.

He was the team’s top midweek starter for a large portion of the season and pitched in eight of the first 39 games. But his appearances became more infrequent late in the season when his velocity fell and his command became iffy.

Bolden pitched only once in the final two months of the season and struggled both times. He allowed a combined 3 runs on 6 hits - including 2 home runs - walked 2 batters and threw 2 wild pitches in 2 innings combined against Alabama in the regular season and Southern Miss in the postseason.

It turned out that his issues were warning signs of a ligament tear in his elbow, although it would take several more months to understand the cause. He felt a pop while throwing a November bullpen, prompting an MRI that revealed two tears in his ulnar collateral ligament.

“When we talked to the doctor he said one (tear) looked like the natural fraying from throwing over time in high school, and then the one that I felt during that bullpen,” said Bolden, who was a 16th-round draft pick of the Tampa Bay Rays out of Pleasant Grove High School. He was committed to Seminole State (Okla.) College at the time, but Arkansas, which had been recruiting him, called with a scholarship offer “within 15 minutes” of his name being called in the draft. The Razorbacks had scholarship money freed up because a couple of their signees had been drafted and planned to go pro.

When he first arrived to Arkansas, his fastball velocity was 89-90 mph. He said he is hopeful to get back to that speed soon and believes he will because his arm “basically feels brand new…the ball just feels like it’s coming out much better.”

Second-year Arkansas pitching coach Matt Hobbs had not seen Bolden pitch live until he was cleared to begin a throwing program last summer, but he studied video from Bolden’s first year. What he sees now is a pitcher who has “elite command” and a better changeup than the one he showed as a freshman. Bolden said the 82-83 mph pitch has a new grip and more movement than it did prior to his injury.

It appeared to be the changeup that Bolden threw to get Webb to swing at for his third strike in Monday’s scrimmage.

“From the information I had and some of the video I was able to watch, that pitch has come a long way,” Hobbs said.

Bolden has also scrapped a slurve for a slider that registers at around 82-83 mph.

“The slider is a better fit for me,” Bolden said.

But perhaps the biggest difference in Bolden is his delivery, which has been shortened from when he pitched as a freshman. It is a change that has been noted positively by Hobbs and Van Horn. Hobbs said the change has made Bolden more efficient.

“His fastball command is as good as we’ve got on the pitching staff, based off the bullpens,” Hobbs said. “He’s able to do a lot of different things. I think that if the stuff continues to get better - which I have no doubt that it will - he’s a guy that may be in the mix for a starting spot. I don’t know what that means yet, if it’s midweek or it’s weekend, and a lot of things have to happen before you can say he’s going to be able to do it.

“He’s a tough kid and he’s been through a lot to come back from elbow surgery. He’s been very, very good. What I can say is that Caleb’s buildup has probably been the most seamless of anyone that I’ve dealt with from day-to-day and just how he’s been able to come back and hasn’t really had any setbacks, except for maybe one where we had to shut him down for six or seven days. That was (in October) and there hasn’t been anything that’s really held him back. He’s been able to stay on our program for him and done a great job.

“The work ethic is second to none and there’s a reason why he’s been able to come back as well as he has.”

Before preseason practice began, Hobbs estimated Bolden was pitching at about 80-85 percent of his potential.

“It’s hard to say with any of those surgeries what fully rehabbed is,” Hobbs said. “You continue to get better, so what equals fully rehabbed? Is he healthy? Is he strong? He’s 100 percent healthy and strong, otherwise he wouldn’t be throwing it. Is it as good as it’s going to be? I don’t think so.

“I hope he’s only at like 50 percent. I hope it’s going to get that much better.”