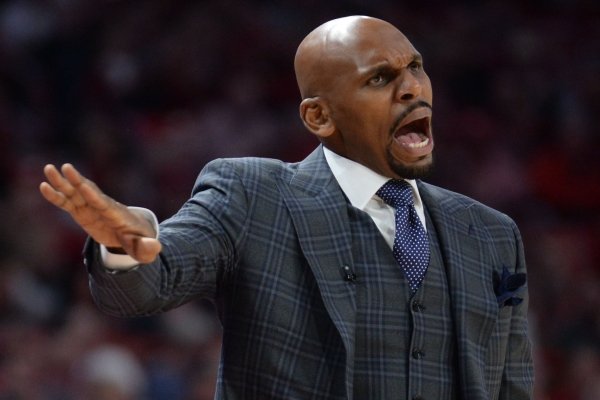 FAYETTEVILLE -- Vanderbilt will have to pull off the near impossible and beat No. 13 Kentucky in Rupp Arena on Wednesday to keep from losing its 25th consecutive SEC regular-season game.

And if the Commodores don't shock college basketball with an upset of the Wildcats, they will break a record of futility going on 80 years strong.

Sewanee and Vanderbilt are currently tied for the longest SEC regular-season losing streak at 24 games. Sewanee's streak was still active when the school elected to exit the SEC in 1940.

Vanderbilt has not won an in-season conference game since an 82-69 upset at Ole Miss on March 3, 2017, in the Commodores' final regular-season game that year.

The streak grew to 24 games after a 90-64 loss at South Carolina on Saturday.

Coach Jerry Stackhouse, the former North Carolina and NBA standout, said he knew what he was getting into when he took over for the fired Bryce Drew in the offseason. However, the Commodores have had horrible injury luck, losing high NBA Draft pick Darius Garland last season, forward Clevon Brown early this year, and the league's leading scorer Aaron Nesmith this month.

"You try to just live in the moment of who we are," Stackhouse said. "I didn't bring in the losing streak from last year. I'm still trying to put my imprint on this team and this roster.

"When you lose two pieces like that, it makes significant changes to how you try to approach things. We knew what we were getting into ... but now we've got to find a different way. It's hard to do it once you've started in conference. We were built around Aaron and his shooting, and now we're kind of trying to adjust on the fly."

Vanderbilt's streak of SEC losses, including the postseason, is at 26 games, with the first of those coming under Drew and the last six under Stackhouse.

Sewanee, also called the University of the South, is now a Division III institution. The Sewanee Tigers were in Arkansas on Sunday, falling 85-81 at Hendrix College for their second loss to the Warriors in eight days.

The Kentucky at Auburn game Saturday has the potential to be one of the best in the SEC this year.

The 5 p.m. game has attracted ESPN's College GameDay show, which will mark its first appearance at Auburn. Kentucky has been on the show 18 times, whether at home or on the road.

Both teams come in relatively hot.

No. 17 Auburn has won back-to-back home games over South Carolina and Iowa State after its first two losses of the season in succession at Alabama and Florida by an average score of 76-56.

Kentucky moved up two spots to No. 13 in the AP poll Monday after winning seven of its past eight games. The Wildcats, who held on for a 76-74 victory in overtime at Texas Tech on Saturday in front of 14,763, are expecting another raucous atmosphere at Auburn, much like the ones they've seen at South Carolina, Arkansas and Texas Tech in recent weeks.

"This was one of the best atmospheres we've played in," Kentucky forward Nick Richards said of the crowd in Lubbock, Texas. "We go to Auburn soon and that's going to be a really, really good game. We love playing at Auburn, and we're really excited for it."

The SEC office recognized Alabama's Kira Lewis and Kentucky's Nick Richards as co-players of the week, and LSU's Trendon Watford as its freshman of the week Monday.

Lewis, a sophomore guard from Meridianville, Ala., averaged 21 points, 7 rebounds, 4 assists and 2 steals in the Crimson Tide's victories over Vanderbilt and Kansas State last week. Richards, a 6-11 forward from Kingston, Jamaica, averaged 22.5 points, 11 rebounds and 3.5 blocked shots in victories over Georgia and Texas Tech. Richards tied his career high with 25 points and added 14 rebounds for his eighth double-double in the win at Texas Tech.

Watford, a 6-9 swingman from Birmingham, Ala., averaged 18 points, 6 rebounds, 2 assists and 1 block in wins over Florida and Texas, including a career-high 22 points in the Tigers' 69-67 road victory over the Longhorns.

LSU extended its winning streak to eight games with its late surge in a 69-67 victory at Texas on Saturday.

The Tigers have been the cardiac kids of college basketball of late, winning their last six games by a combined 15 points, starting with a 79-77 edging of Arkansas on Jan. 8.

LSU jumped into The Associated Press Top 25 poll at No. 22 on Monday.

"I thought we did a good job down the stretch," Coach Will Wade said. "The last four or five minutes we kind of do what we do. We changed our defenses up. We made some big plays going to the rim, we got some steals and we made some toughness plays."

The SEC and Big 12 split their seventh annual series by a 5-5 count Saturday, leaving the Big 12 with a 40-30 lead in the challenge.

Both conferences logged three home wins and two road victories. SEC kingpins LSU and Kentucky won on the road at Texas and Texas Tech, respectively. The Big 12's Oklahoma State logged a road upset at Texas A&M and also got a road win from No. 1 Baylor at Florida.

Alabama, Arkansas and Auburn all defended their home courts for the SEC, while Kansas, Oklahoma and West Virginia did the same for the Big 12.

Missouri converted an NCAA record 54 consecutive free throws during the course of two games, which turned out to be back-to-back losses at Alabama and to Texas A&M.

The streak began with a 31-of-31 performance from the line in an 88-74 loss at Alabama on Jan. 18. The Tigers then converted their first 23 free throws against the Aggies before Mitchell Smith, a Van Buren product, missed the back end of a two-shot opportunity with 28 seconds left in the game. The missed try would have created a 63-63 tie.

The Tigers missed a pair of three-point shots in the final nine seconds that would have tied and won the game, respectively, before Texas A&M held on for a 66-64 win.